VivaCosenza: how to transform a city event into a real-time participatory performance

VivaCosenza Performance Lab is an international event about art and performance that will be held on December 8th and 9th, 2012 in the city of Cosenza, an ancient and beautiful site of the south of Italy.

The event will feature multiple international artists, a city-wide forum engaging the whole population in cultural design and activities dedicated to the creation of public strategies and policies, as well as a series of innovative scenarios dedicated to education, for high school and university students.

At AOS we have been invited to design the digital life of the festival. A first, early version of the website which will host all this part of the initiative can be seen here: http://vivacosenza.it/viz

We decided to create some tools which could be used by students and citizens to enact the real-time, participatory narratives of the event, as fundamental part of all of the education, communication and cultural formats which have been designed for the festival.

Using a series of open technologies which we had developed for the ConnectiCity and VersuS projects, we have setup a system which is able to capture in real-time all of the social network activity of citizens, students, visitors, organizations and institutions of the city of Cosenza and also of the people who will use social networks to communicate about the festival and the city from other locations.

Special focus will be given to the projects created by high-school and university students, who have been asked to create communication formats for the festival, dealing with arts, food culture and new forms of journalism and storytelling. The contents created in these formats will be given special highlight and the best ones will be awarded a prize and be taken into consideration for further development for next year’s edition.

Even more, all of the emergent communication which will be generated in real-time during the festival will be captured from social networks, and visualized both online, on smartphone/tablet applications as well as using a projection mapping in a public space in the city, so that all citizens will be able to experience the digital life of the city directly from public space.

The objective of the platform is to understand the ways in which these kinds of technologies can be used to transform the life of the citizens of the city, to imagine, design and enact novel participatory approaches.

In this, we suggest a new role for institutions, who become promoters and maintainers of new forms of expression which are available and accessible to everyone.

Justas we used technology to create an infrastructure for expression to be used by students to create their own formats, we imagine a “city as a platform” (for example as we suggested in Trieste a few weeks ago), where ubiquitous infrastructure (both cultural and technological) is made accessible and usable through public policies, enabling citizens and city dwellers to basically have the tools to design and build their own digital, cultural, business, communication, storytelling, envisioning ecosystem.

We will start from scratch with the students and, thus, we have setup a basic set of technologies, for them to be used as building blocks for their communication and storytelling formats.

For example, we have setup a platform which will capture all city relevant public content generated on social networks (relevant either because it was generated in the city, or because it discusses on city-relevant issues).

Here below you can see a visualization of the data in the system being captured in realtime: 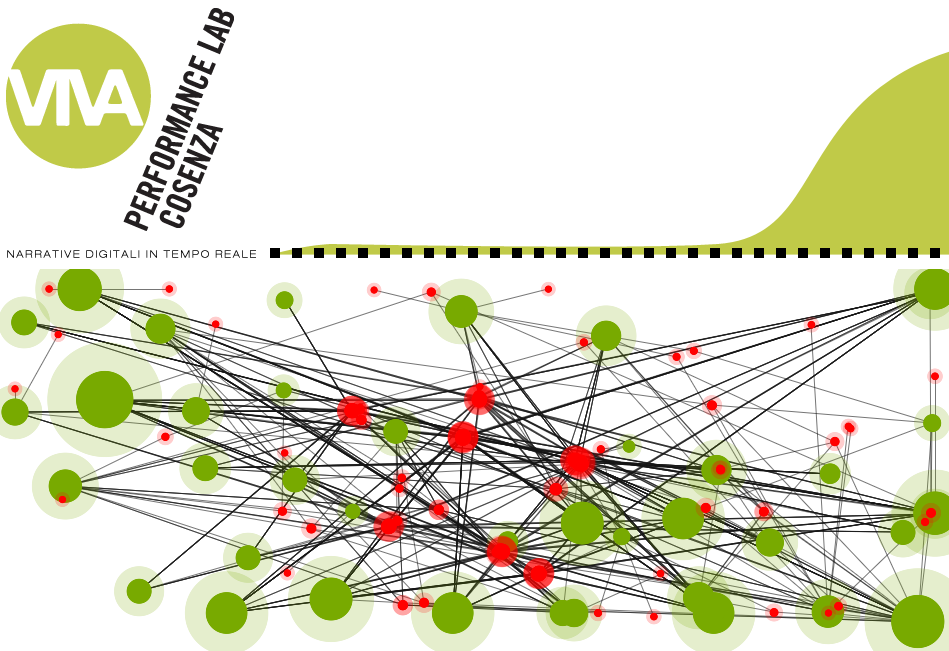 Data being captured and visualized in Cosenza in realtime

Data can be analyzed according to time, using timelines such as the one below: 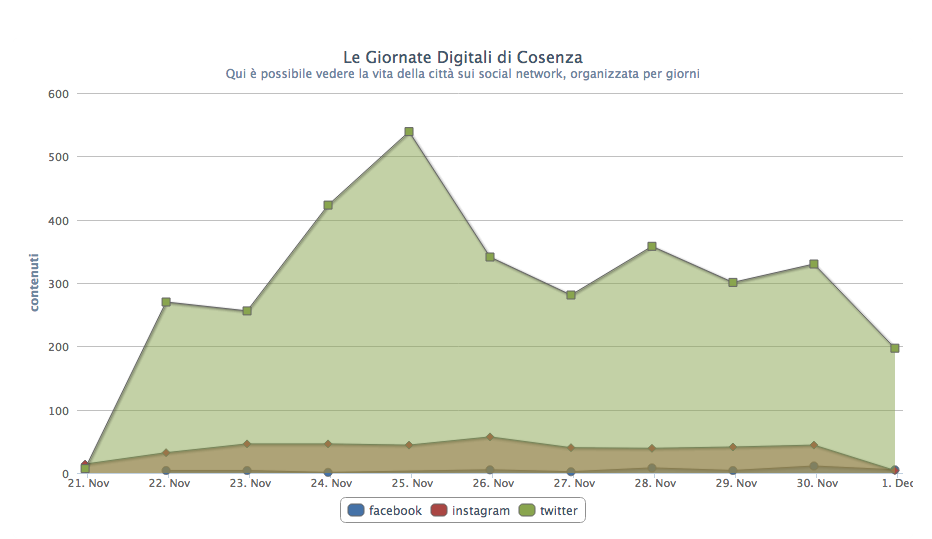 the Digital Days of the city of Cosenza

And users can be analyzed for their activity (how many contents they produce on social networks) and according to the topics they discuss, as seen in the two images below 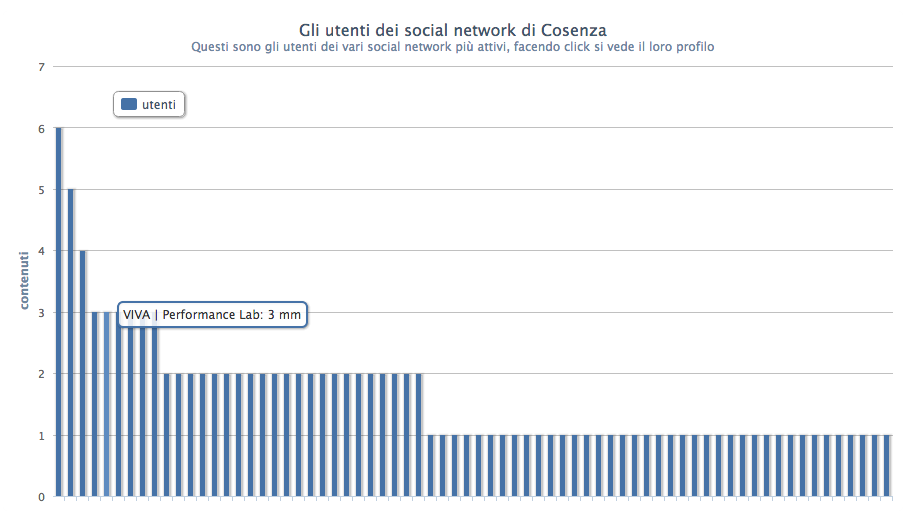 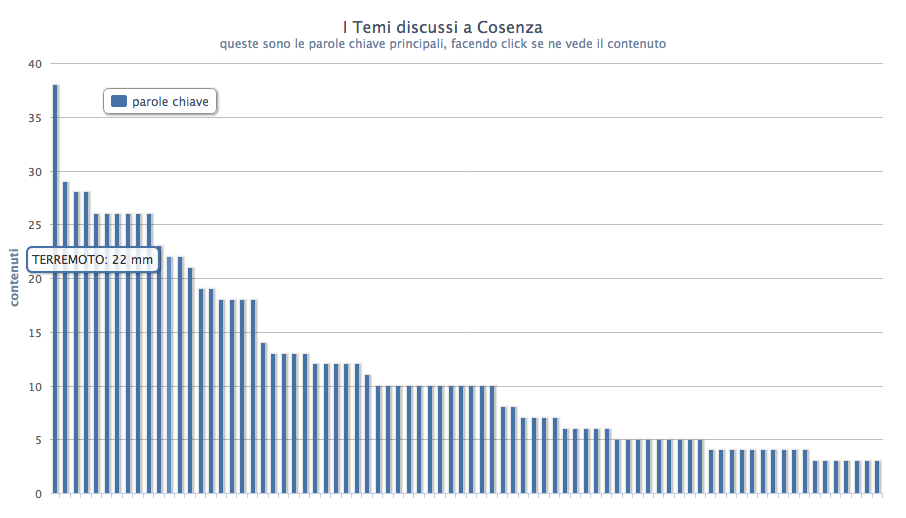 What digital citizens discuss in Cosenza

Here, for example, we have assembled some for the beginning of the festival (bars are almost empty for now, as the festival has not begun yet), and by simply clicking them people will access what students and city dwellers have produced, shared and communicated in the specific format, across social networks and sites. 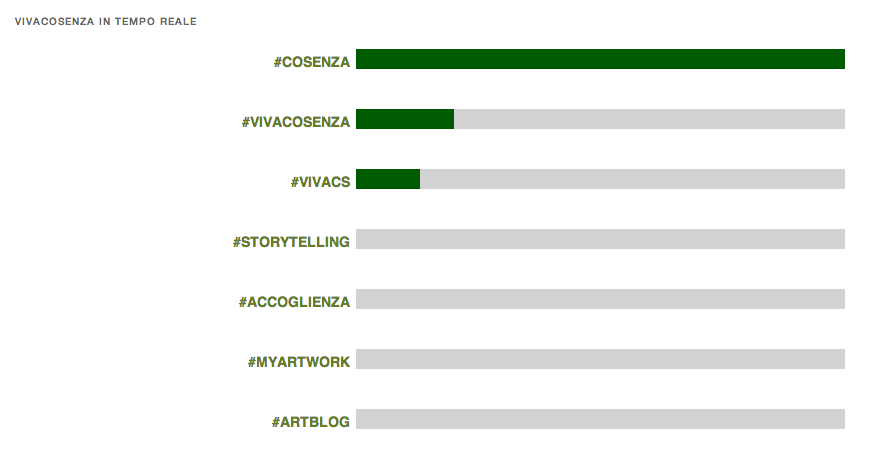 some formats, dedicated to the festival

It must be highlighted how these technologies allow capturing in real-time the public communications which citizens publish on social networks (for VivaCosenza we will be using Facebook, Twitter, Instagram and Youtube). So we will capture all (and only) those messages which are intended as being public by their publishers (users/citizens).

Yet this is a delicate issue, as the definitions of privacy, public/private spaces are rapidly changing, and many times people have a hard time in understanding the reach and scope of visibility which the messages they post online have.

We will use this occasion to also explore these important issues: we do not wish to promote a novel form of Panopticon, but a cultural approach according to which individuals and groups can freely decide what and how to communicate, to whom it should be visible and accessible, and to use this information to create opportunities for collaboration, sustainable business, social innovation and art.

So heads up and come at VivaCosenza Performance Lab!