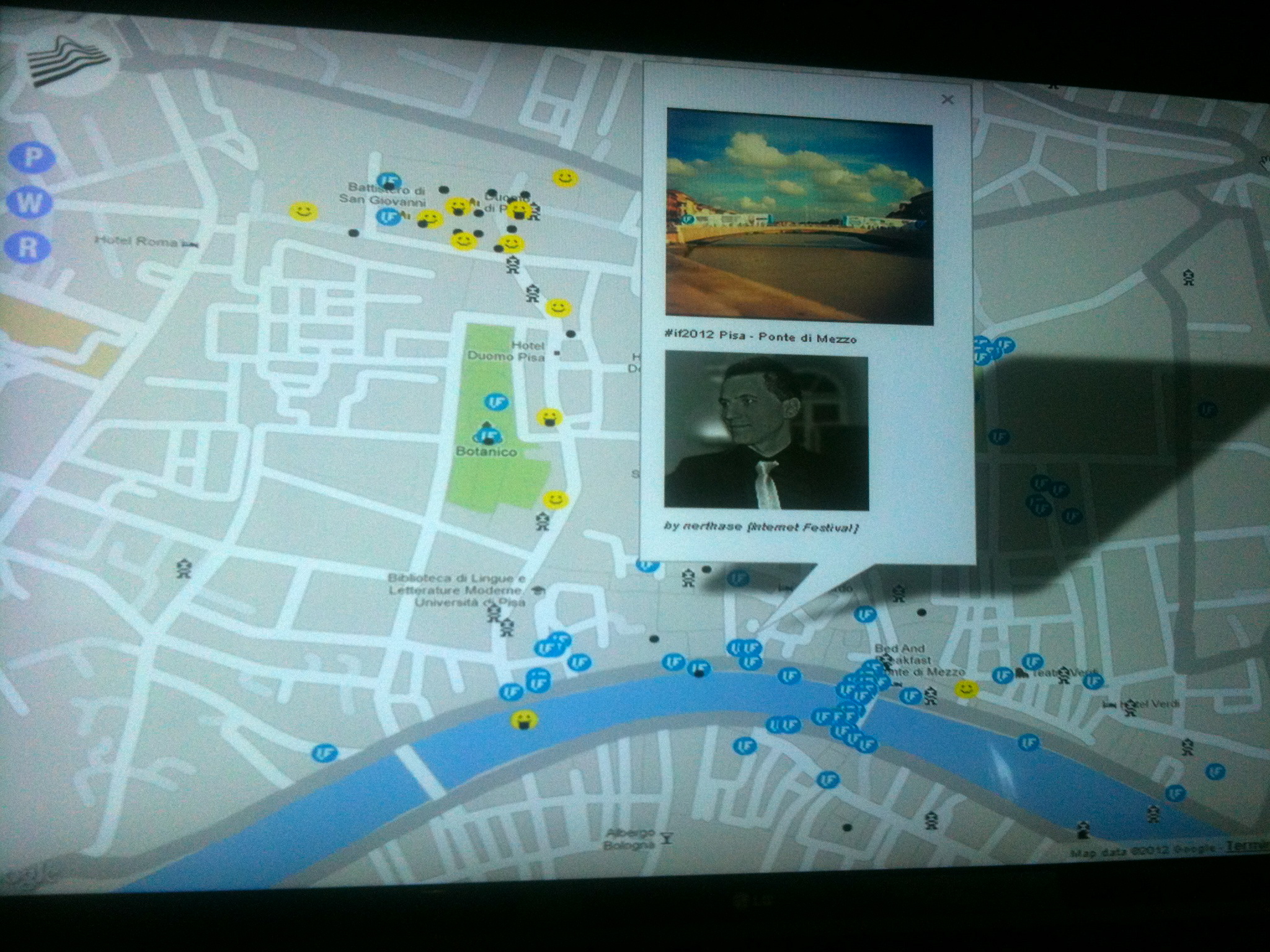 Emergenza was presented at the Internet Festival 2012 in Pisa, as an installation and a performance dealing with the future scenarios of our cities, as enabled by the wide and ubiquitous accessibility of digital technologies and networks.

Our planet is a continuous conversation between people, information systems, sensors, digital ecosystems, social networks, objects, natural ecosystems, processes and organizations who use ubiquitous technologies to read and write their points of view on the world, under the form of content, data, information, and to freely recombine them, associate, aggregate and use them, to produce knowledge, wisdom and economies.

This scenario completely and radically transforms our perception of public and private spaces, of citizenship, of intellectual property and copyright, of sustainability, privacy, anonymity, transparency.

The ways in which we work, learn, produce, establish relationships, feel emotions, have fun, and in which we coordinate ourselves and collaborate with each other have already radically changed.

EMERGENZA is an interactive narrative, creating suggestion and emotion, engaging people in this scenario, as applied to the city of Pisa by imagining it into a near future, but using the data, information and tools which are ready and available today, now.

The title of the project refers to both the “emergent” characteristics of the phenomena which take place in this kind of scenario, and to the “emergency” brought on by the possible dangers and uncertainties of these technological approaches.

Both aspects are analyzed in positive, constructive ways. 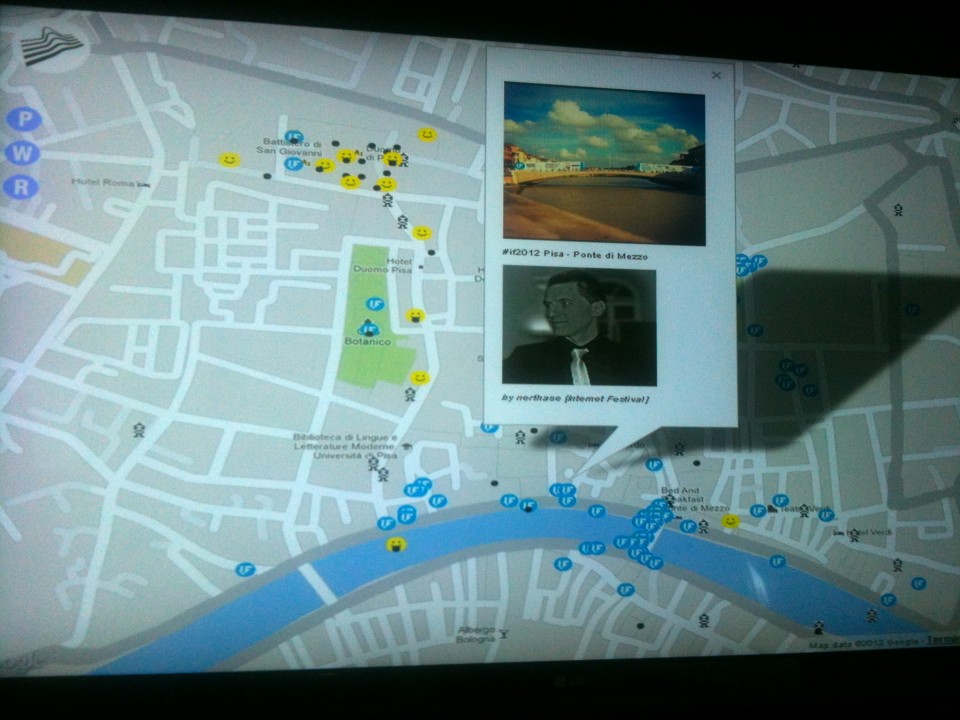 Emergenza at Internet Festival, the map

This is the kind of system we use to analyze the digital public discussions which take place in cities, to realize the systems which can be used to create new tools for city governance, urban planning and human relation which operate on peer-to-peer strategies.

This below is the second visualization of the installation: 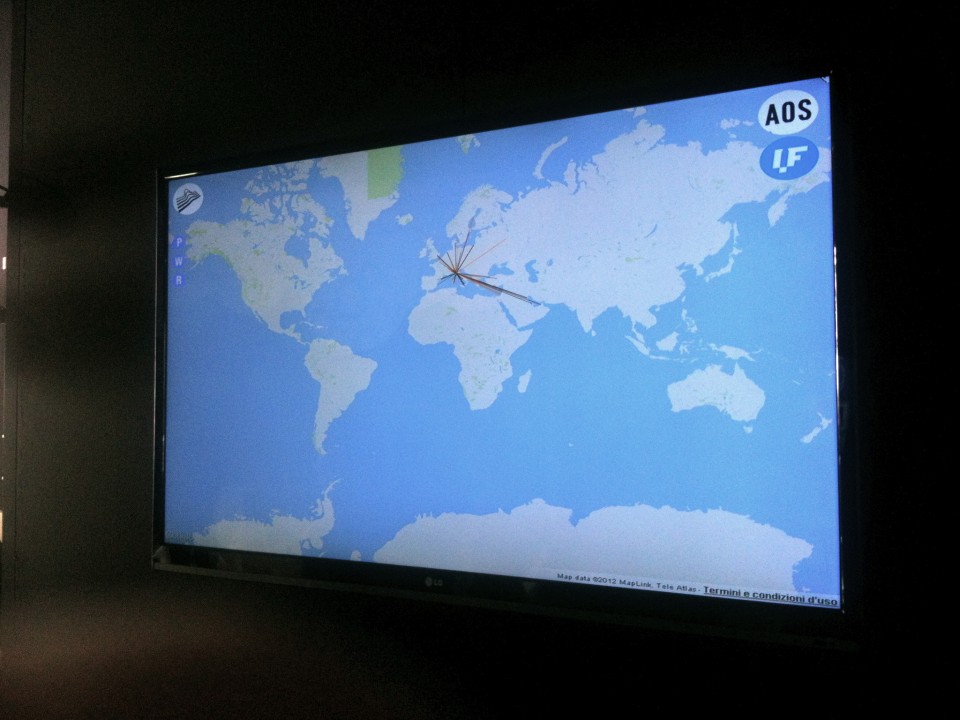 Emergenze at Internet Festival, the world

The second visualization is very simple and minimal, and it shows the places which, in real time, are publicly using social network in some ways to interact with the city (of Pisa).

It shows something which we might imagine as being the instantaneous public relations (or influence) established by the city of Pisa with the rest of the world.

Lines connect places which are interacting with the city of Pisa (by talking about the city, by interacting with some of its users…) and colors show the topic domains of these connections (green is environment, blue is commerce, orange is information or updates, etc.).

This is the kind of visualization we use to analyze the influence of a city in respect to other planetary locations, being able to identify opportunities for relationships, collaborations, and the themes which they relate to.

This below is the third visualization composing the installation: 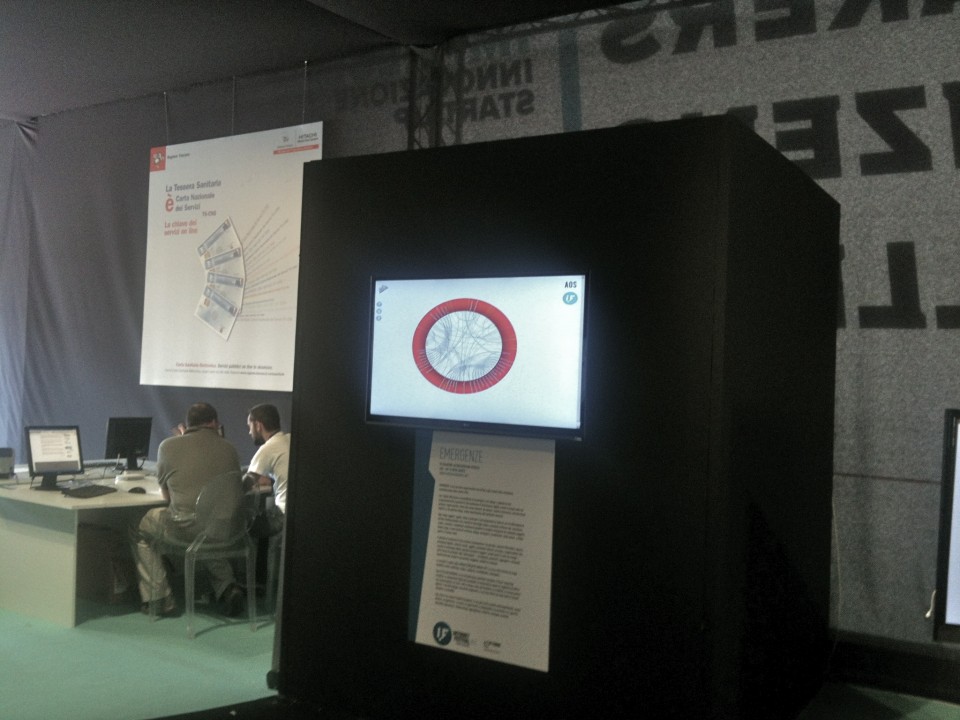 Emergenze at Internet Festival, the circle of relations

Each slice on the circle is a social network user. If a line connects two users, it means that they interacted in some way (e.g.: they publicly messaged each other, or one retweeted a message, or a comment was made, etc).

We use this kind of visualization to observe the emergence of communities and spontaneous collaborations among citizens/dwellers, and to identify emergent trends, and to recognize opportunities for collaborations and participatory project design.

The Emergenza performance was created as a pragmatical experience of this kind of near-future scenario.

To do this, we decided to use an oxymoron: in the future we describe typical television formats such as the “news show” will radically change, if not completely disappear (at least in the way we know them).

We decided to produce a format of a News Show from the future called “Pisa real-time: the news from now“. The format is completely polyphonic, meaning that it is not a standard news show as we’re used to: all news come by interpreting the digital information which is constantly produced by citizens using social networks.

(the images shown below are screenshots of the graphics used during the performance, organized as an on-stage TV show)

So, instead of the weather forecast, there is the emotional forecast of the city. 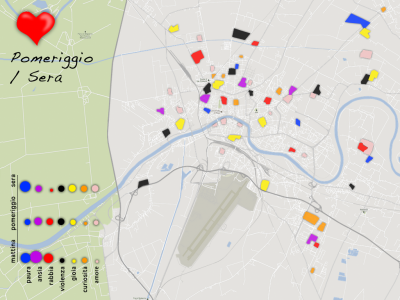 Here the emotional expressions are used to create emotional maps of the city much in the same way in which weather forecasts in TV show the presence of clouds, wind and rain, and are used to show the emotional trends which might be appearing in the city, trying to expose important information about the city’s lifestyle.

Then there are the real time user-generated news about the city governance. 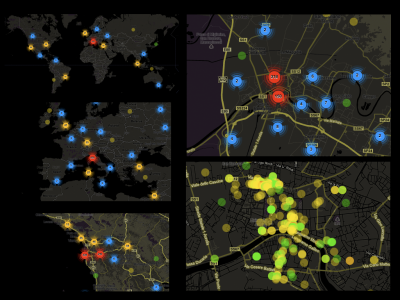 All information is shown also as coming outside of the city boundaries, as in this vision the city does not end where the administrative borders are. In the case of Pisa, many comments about the conditions of the public spaces of the city came from tourist reports who had just been in the city. 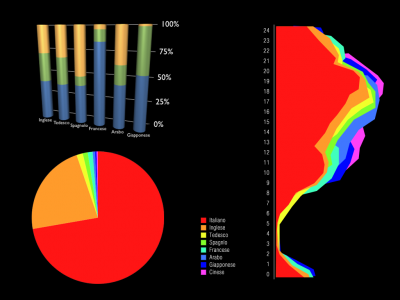 Also important were the news from the multicultural city, showing the various languages and cultures present in the city, and the ways in which they represented themselves and their urban life using social networks, including the timelines of their online discussions and the relative percentages of their sentiment.

An one other part of the format which raised much interest was the part exposing the perception of security and safety, as expressed by people’s expression on social networks. 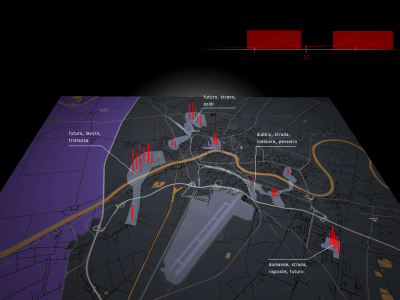 Here maps show the locations in which people expressed sense of insecurity and uncertainty.

To further remark the polyphonic approach, we decided to speak the least possible amount of time during the performance, and we auto-replaced ourselves with messages coming from a series of interesting points of view.

First was the contribution of prof. Alberto Abruzzese:

Next was prof. Antonio Caronia:

(extract from “Interview with antonio Caronia”, by Alessandro Guerriero for NABANEXT)

Then it was the turn of prof. Massimo Canevacci Ribeiro:

And then it was the intervention by Alex Giordano:

(extract from “Alex Giordano” by Internetbenecomune)

And here is a video showing a short speech we gave at the end of the performance (in italian for now) :

We then decided to end the performance asking for a special contribution (in italian):