VersuS and RaiTunes, a musical journey through the emotions of cities 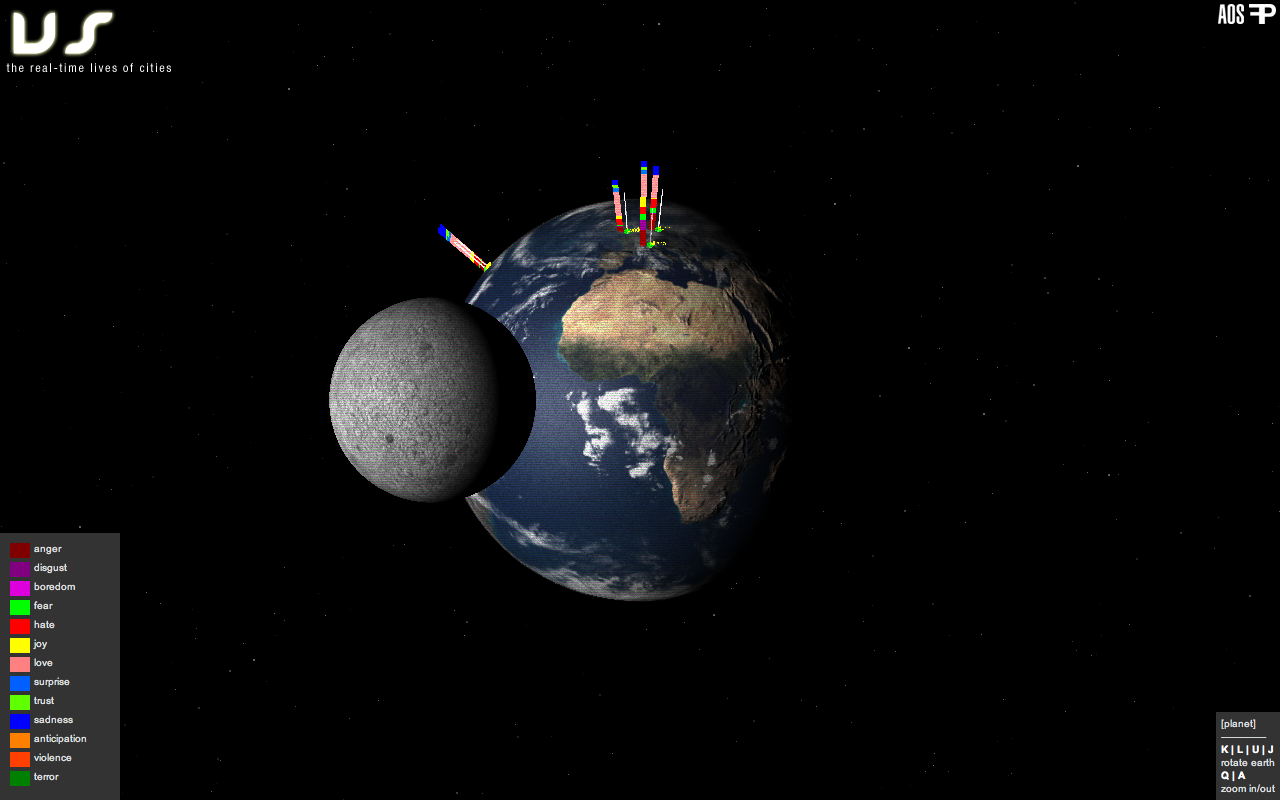 We designed a new version of the VersuS performance, part of the ConnectiCity project.

You can find it here: https://www.artisopensource.net/versus-cities/ 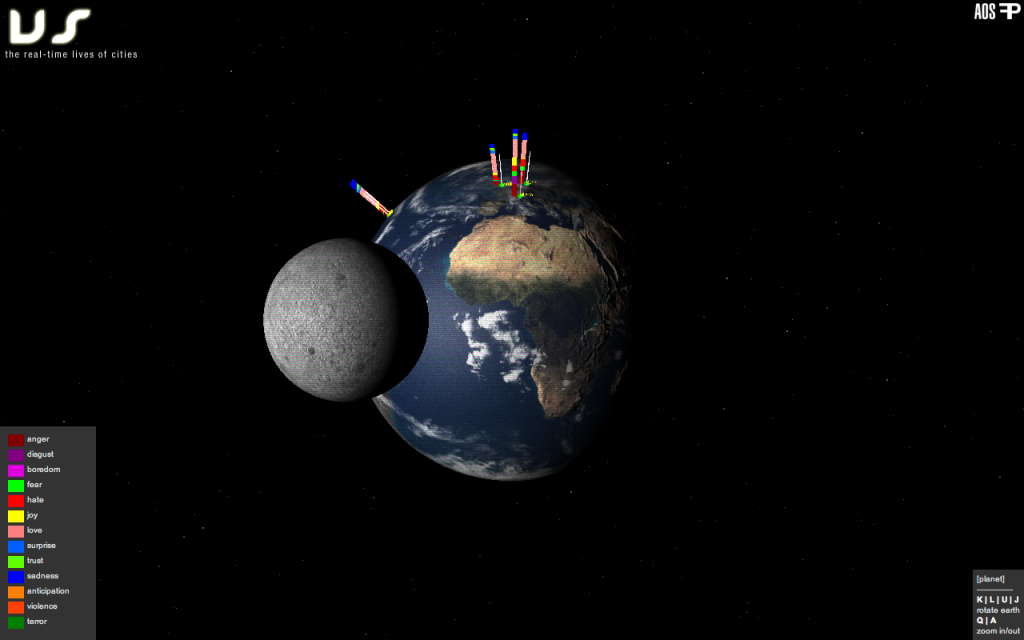 We will officially present it as part of a novel form of radio show, in which a musical voyage through the cities of the planet will allow us to experience in realtime the emotions expressed by people through social networks.

Music, as other forms of expression, originates from the cultures, backgrounds, emotions and desires of people living in cities, territories and immersed in landscapes and visions. The sounds, fragrances, environments, economies, events of those places generate the sounds which artists express in their music. 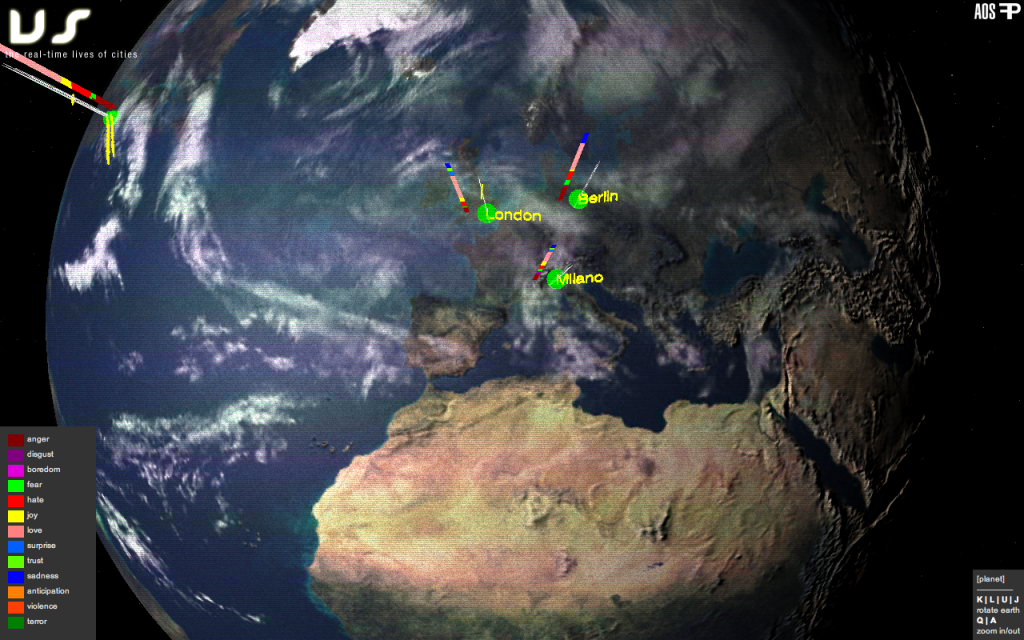 We can imagine music to be, in a way, a generative form of art, through which the emotions, sensations and visions of people are expressed in aesthetic ways.

Today, we benefit from novel forms of expression, using ubiquitous technologies and networks, and we constantly generate information about our feelings and visions through the many digital interconnections which are interweaved with every part of our daily activity, either voluntarily or even without knowing about it.

With the VersuS (and ConnectiCity) project, we explored the ways in which we can become active observers of this scenario, capturing and interpreting the emotions, feelings, sensations, desires and visions of our cities, as expressed by people using digital devices and ubiquitous technologies, and by the city itself, through sensors and realtime information. 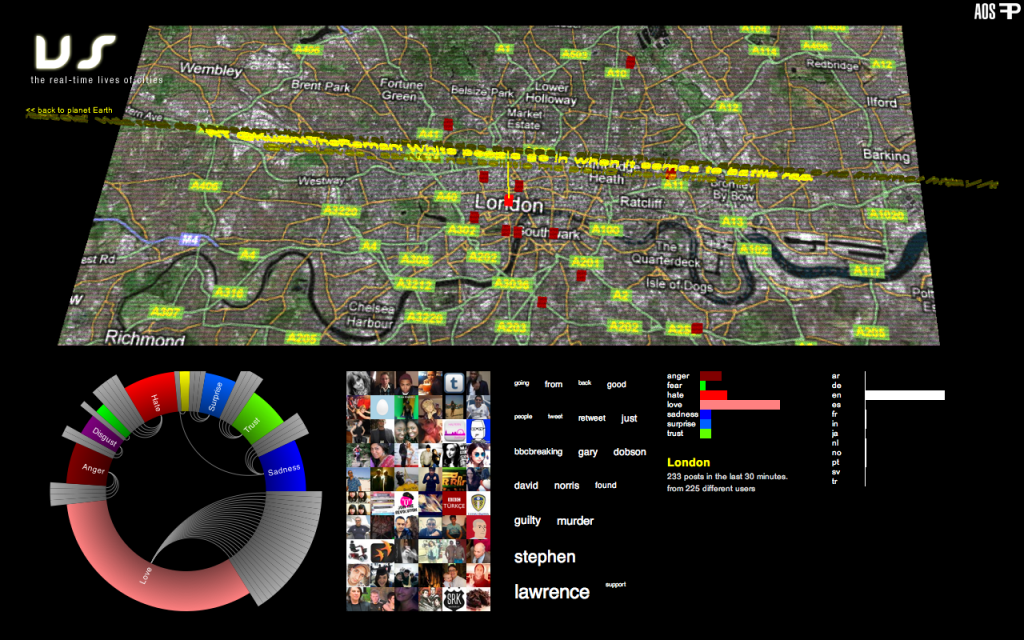 In this occasion, we wish to create a tool that can be used to represent and interact with this richness of information, to better understand the cities we live in, and to become more aware and conscious of our environment and of the human population sharing with us our urban spaces.

The VersuS project aims at creating novel ways in which it is possible to listen to cities in real-time.

On January 5th, we will perform a voyage through music, exploring cities, the sounds that have originated in them over the years, and at the same time looking at the emotions which are expressed in realtime in those same locations, finding clues about what people  think, experience, feel, express, and how it relates to the ways in artists capture and represent the essence of urban spaces.

here below you can find the press release, we hope you will be able to join us in this experience.

(NOTE: the project in this version uses the 3D earth and libraries provided in one of the examples of the Three.js 3D javascript library by MrDoob, is created using WebGL and is best experienced on Chrome browsers)

Travel through 6 cities, in Italy, Europe and the United States. A live performance capturing in real time the emotions of cities, in an open dialogue with music.

On January 5th 2012, on RaiTunes, the sounds of Alessio Bertallot meet the hybrid, neo-real worlds of Salvatore Iaconesi and Oriana Persico. The language of radio will be  contaminated with the language of new media arts, generating novel forms of expression and narratives.

Starting at 11pm and up to 11:40pm, “VersuS, the real time lives of cities” will be showcased in an entirely new version created to interact in real time with the RaiTunes playlist.

This version of the VersuS project will be officially presented during the broadcast, in which listeners will be invited to a realtime voyage into music and the emotions of London, New York, Philadelphia, Berlin, Bristol and Milan.

Moving from city to city, Alessio Bertallot will lead the audience through the discovery of the music that originates in those places, expression of concrete and flesh.

Simultaneously, planet earth will revolve towards the cities: a plunging zoom will allow us to experience cities’ chitchat in front of our eyes; the messages which people, in that moment, are exchanging on social networks will be captured, analyzed, and shown over the places in which they originated, in a dynamic, neo-real, visualization, showing in realtime the sensations of the people which live in that city, transforming us into global eyes, in emotional voyeurs of the whole planet.

Realtime updates and dialogue with Alessio Bertallot and the creators of VersuS will take place on RaiTunes’ Facebook page.