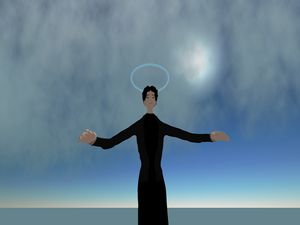 : Karl Marx, Coco Chanel and Franz Kafka are brought back to life using the virtual world of Second Life.

All texts written by these three famous characters have been fed to artificial intelligences and digitally embodied onto autonomous avatars living in the virtual world of Second Life, freely moving about and interacting with other avatars. Whenever they speak to the other inhabitants of the virtual world, their words are generated using the linguistic patterns found in the characters’ writing, creating a continuity from their thoughts, ideas and forms of expression of when they were physically alive.

Dead on Second Life on AOS

a presentation of Dead on Second Life