Does your computer have Chackras? New technological bodies. Chackraputer establishes a parallel between your body and your computer’s body, and puts them side by side: who can reach Kundalini first? A stage performance and a meditative practice.

The Chackraputer interprets the computer as a body, and establishes a metaphor between the mystical interpretation of our human body and the computers’. 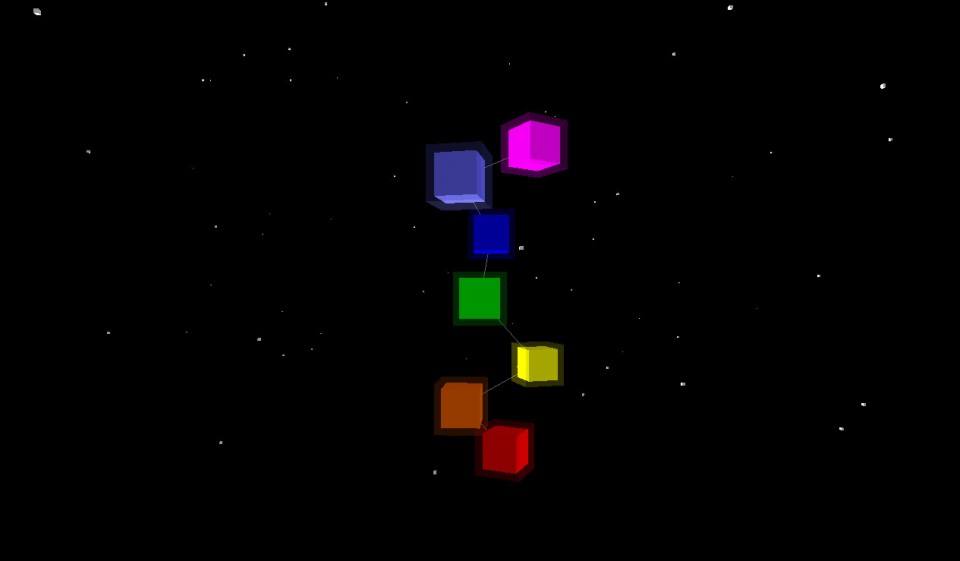 A computer can be thought of as a form of life.

The ChakraPuter is a simple software and an art installation/performance representing the body of the computer on which the software is running by using the iconography of traditional indian philosophy and phisiology.

In the ChakraPuter software, written using the Processing language[www.processing.org], the computer hosting the running software is treated as a complex body by using a technique created as a parallel to the Chakra theories. Each of the basic systems of the computer are analyzed as component of the body, and an indicator of their “condition” is extracted as a result of the analisys.

In the software each of these indicators becomes a Chakra, representing the state of the respective subsystem: there is a Chakra for memory status, for file system status, for network I/O, for audio I/O, for video I/O. Each of the Chakras is represented as a color-coded cube, whose dimensions vary in accordance to the state of the relative subsystem (wher greater activity in the system is represented by a bigger size for the cube).

The cubes revolve on themselves and around a small universe, representing the interior space of the computer. The speeds of such revolutions are proportional to the rates at which changes occur in the subsystems: a highly dynamical condition will cause a faster revolution rate; a high level of variance will cause a higher speed around the space.

Relative positions of the cubes, thus, change, geometrically showing the relative status changes in the various components of the computer. Different spatial configurations will show conditions of themachine/body.

In a human body, the various subsystems are not isolated: each change in one of them is reflected in the others in some way. Chakra theories account for this observation, describing energy paths running along the Chakras, and techniques that can be used to establish harmonious flows along the body and spirit.

This observation is also extensively verified in the machine/body of the computer where, as an example, higher network activity will surely result in changes of the memory occupation, or where audio or video activity will cause higher CPU loads.

In the ChakraPuter the Chakras are, thus, shown as connected by a white thread, whose weight is determined by the correlation of the conditions of the various Chakras. A correlation that can also be clearly visualized by observing the ways in which the Chakra cubes change dimension in sequence, when something “happens” inside the computer.

In the human body the topmost Chakra, the “Sahasrara” (also called “the Crown”), is the most important of all, representing the union of the Chakras. It is activated (or “opened”) when all the others are “open” and an harmonic energy flows runs through all of them: this incredible event, in Chakra-based theories, is described as a state of Illumination expanding the levels of Kundalini energy and achieving the Bodhicondition (the “awakening”).

In the ChakraPuter the Sahashrara Chakra is activated when a state of complete correlation is achieved between all the other Chakras of the machine/body, representing a condition of intense and synchronized state of dinamicity in the computer. In this event, establishing yet another parallel with the human body, a broadcast message is sent on the network, that can be interpreted by other ChakraPuters in the “universe” :) .

The ChakraPuter installation/performance features a sculpture created by integrating the ChakraPuter software with some external electical circuits. These circuits, activated by a really simple ‘n rough protocol operating on a serial port (eventually emulated through USB) connected to several led-based circuits, providing visual effects integrated with the sculpture. A sound system is also built in the work, diffusing the sound of the installation throughout the physical space in which it is placed.

A performance has been organized at the Forte Prenestino in Rome around the installation: in the event a Yoga teacher sat side by side with the ChakraPuter while performing Hata Yoga positions and techniques.