My name is Salvatore Iaconesi, and I am also known as xDxD.vs.xDxD.

I am originally from Italy, but I always moved across countries and cities: even when I was a kid, I lived between Italy and the United States, travelling with my family.

Growing up, I had a chance to get to know several places in the world, either by tavelling or by working there: I am happy to be able to say that I have visited 4 continents and that I was able to get in touch with many cultures while working in Italy, Ireland, United Kingdom, Czech Republic, Mexico, United States, Brazil, Malaysia, Japan, Turkey and Denmark.

A series of urban practices shaped many of the things I still do today, giving me insights that I progressively reinterpreted as methodologies to approach technologies, techniques, theories and opportunities. 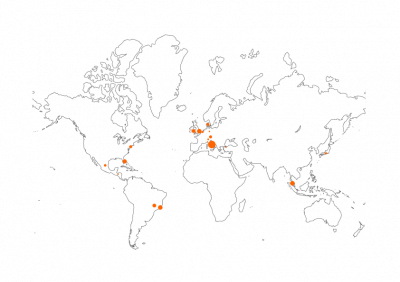 this is where I worked, the spots' diameter shows the number of projects in the various parts of the globe

Over the course of time, I have been an avid skater, a graffiti writer, a electronic musician at both concert halls and rave parties, a software pirate, a squatter, a punk, a hacker. All of these practices helped me to understand the infinite possibilities that are available in the world. 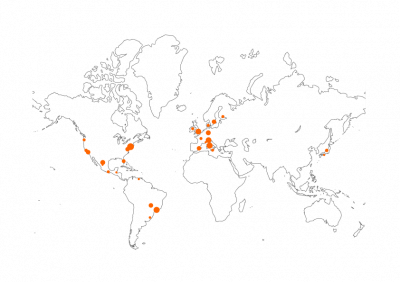 these are the places in which I skated, played music at rave parties, drew graffiti. The size of the dots is proportional to the intensity of these activities in the respective locations.

The world is full of things, spaces, bodies and minds, and they are often configured on specific codes and layouts that are determined in rigid ways, expressing only limited number of voices. But, with luck, reality is not rigid, and the world does not have pre-determined borders: it is possible, most of the times, to take side-steps and to watch our environment from different perspectives, letting unexpected spaces emerge: interstices in which codes and forms can be disassembled and reassembled, remixed, mashed up, to produce new meanings, new languages, new spaces.

Through urban practices I learned that breaking codes, injecting new ones and remixing/reassembling/reinventing reality can produce enormous values and incredible effects. If these actions are supported by ethics, tolerance, solidariety and empathy, these values and effects magically often become beatutiful and positive.