A new Literary Genre: the Algorithmic Biography, on DigiMag 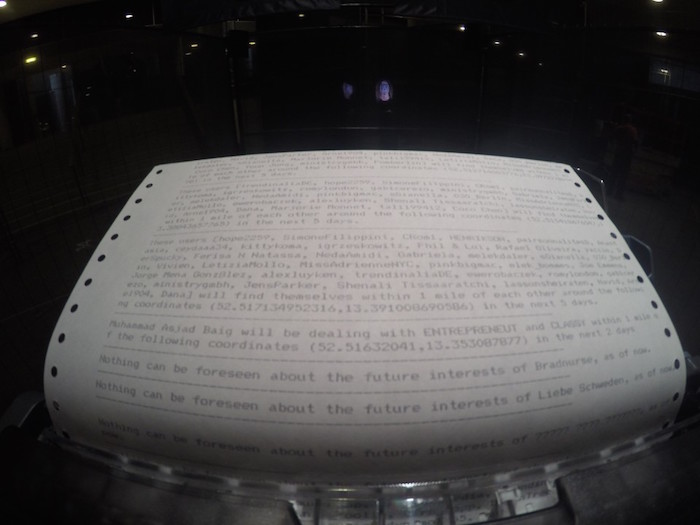 The new literary genre, the Algorithmic Autobiography invented with the GhostWriter project has been featured in a paper which was published on Digimag Journal #75.

You can read the paper here:  Algorithmic Autobiography: paper (PDF)

The paper also includes a short narrative, about a Data-Driven homicide, which we use to explore some of the concepts detailed in the paper (e.g.: quantified self and its implications).

We thank Patrick Lichty for having given us the opportunity to design the perfect homicide, and we leave you with the short story:

N.S. was sweating. The run uphill, at the end of the final part of his daily run, had the effect of burning many calories and of positively stimulating his cardio-respiratory activity, but it also seemed to cause his heart to explode. The digital wristband connected to his earphones started emitting a nervously rhythmic sound, to the beat of his crazed blood pump.

N.S. started thinking about the moment in which he would have published his daily run on AttitudeBook: 12 kilometers was not bad for a university professor used to a sedentary life.

His raving heartbeat was not the only thing that was troubling him, today.

He seemed to have the impression of being followed.

It all started a few days ago: a systematic sensation of being the object of observation, confirmed by what he thought was certain evidence: that boy over there, picking up the phone and turning around just it time to avoid being spotted; that other one, pretending to being there merely by chance, and, instead, N.S. had seen him in 4 different parts of the city already, at the exact places where N.S. had planned going. The guy would be waiting, checking his phone, looking precisely towards the direction from where N.S. would be coming from. And he would immediately divert the gaze as soon as he realized that he had been spotted.

Or the strange login reports on his Quantified Self accounts, from places in his town, but from different computers and devices. Or the glitches, in his smart watch, wearables, social networking accounts, emails, and even credit cards, in which systems started bringing up password recovery procedures, phone confirmation dialogs and more. N.S. changed all of his passwords and codes, so he was convinced that there was really nothing to worry about. But not today.

Uphill. Heartbeat. Breath in, out, in, out. Almost made it. At the top of this next hill was the climax, the apex of the run, and the point at which he would have been most tired and energetically drained, according to his wristband. So much that his doctor, two months ago, while N.S. was at the same spot, sent him an instant message: “Hey! Take it easy! The notification which just came in said that you were having a heart attack! I looked on the map and I saw you were running… but don’t push yourself too hard, take it easy..”

Uphill. Sweat. Heartbeat. Breath in, out, in, out. Then it’s all downhill, alone, in the beautiful park.

And, then, when he completes the uphill curve, N.S. finds them.

They are 5. Calm. Standing along the path, exactly where he would have slowed down for a second, to drink a sip of water. Exactly where there is no network signal coverage. Exactly where every day he stops to do some exercises, while looking at the landscape from above, as documented in many images he shared online.

They are silent. They smile. N.S. stops. he wipes the sweat from the back of his neck with his little towel. They step forward and say

“We know everything about you, even things you don’t know.”