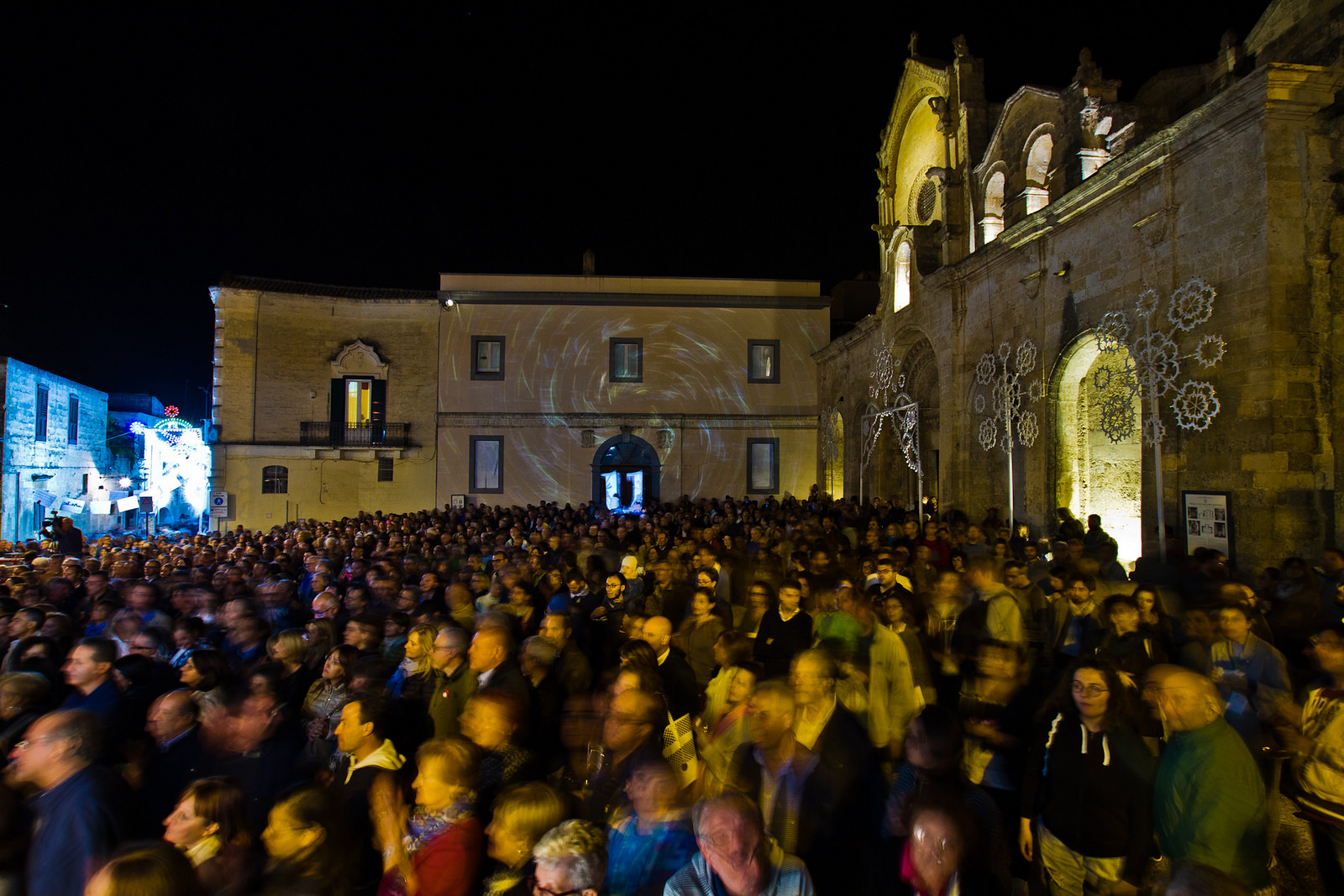 La Cura, together with Art is Open Source, Fondazione Matera-Basilicata 2019 and many other partners, have celebrated the 500th anniversary of Utopia by sir T. More, turning the city of Matera into a public laboratory to reinvent contemporary utopias.

“Utopia is a neologism created by More: a perfect place which cannot exists. After 500 years, we decided to play again with language,” said Salvatore Iaconesi and Oriana Persico (La Cura / Art is Open Source) which, together with archeologist Emmanuele Curti, have conceived the project, “By erasing the “U”, thousands, hundreds of thousands of places (and their utopia) may exist. Places born from words and the multiplication of words.”

At the center of the action, the creation of a participatory dictionary allowing anyone to create and describe new utopias in a simple manner:

take utopia, bar the “u”, replace it with a new (existing or invented word), create a new lemma and describe it. 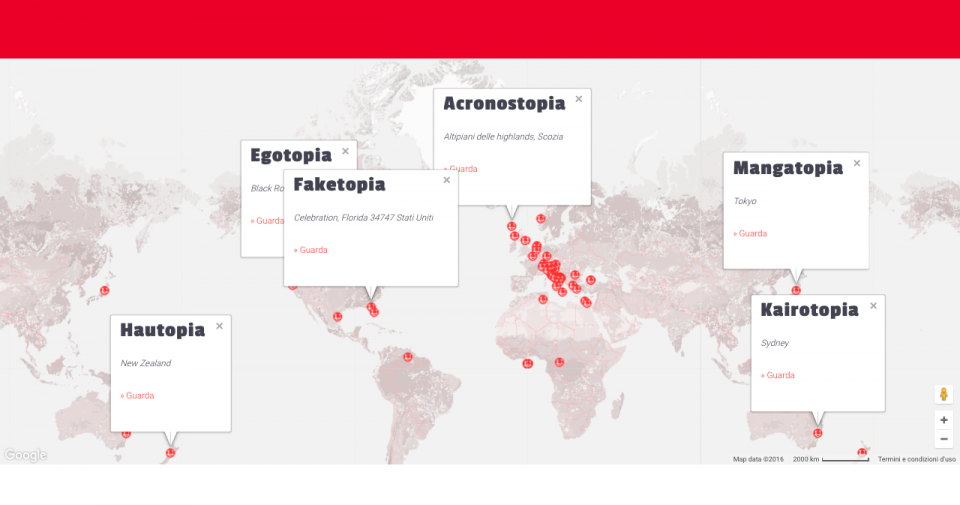 Together with the dictionary, a performative action closes the circle putting bodies, public space and public representation into the equation.

Topia becomes a neo-interconnetive ritual culminating in the destruction of a giant “U” of wood and paper, to celebrate the recovered utopias.

The Topia project took place from September 19th to September 24th in Matera, during the annual Materadio event.

From September 19 to 22 the Topia laboratories involved high school students in the creation of new lemmas for the dictionary. 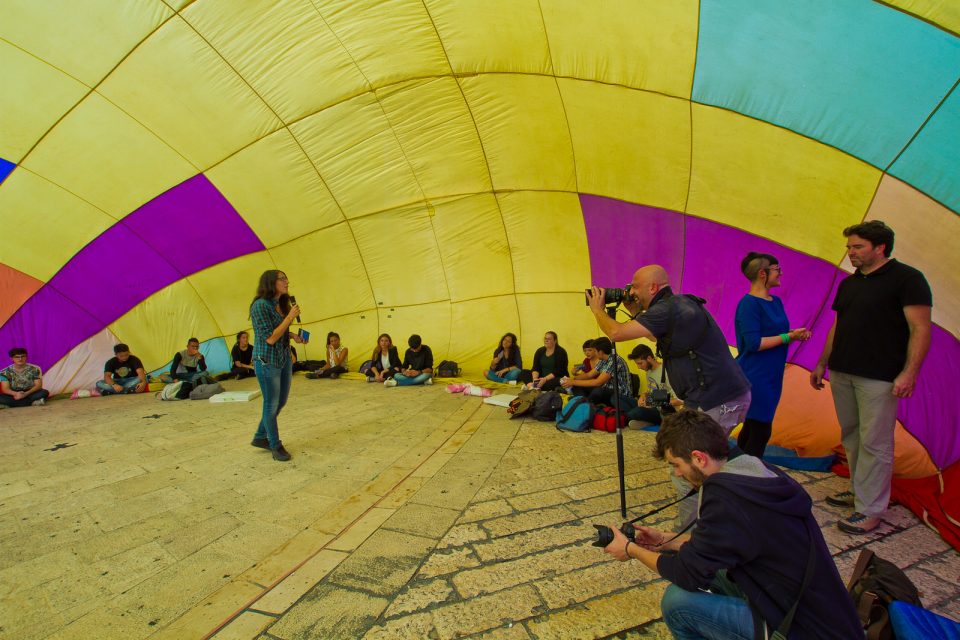 Workshops were held in Piazza Vittorio Veneto by Oriana Persico (AOS/La Cura) and Emmanuele Curti, in a “public/secret” location, the “Iglu de Vent“: an installation which Jordi Enrich, the author, describes as a “capsule for imagination“, a temporary space that appears and disappears, collaboratively built in realtime by the audience. 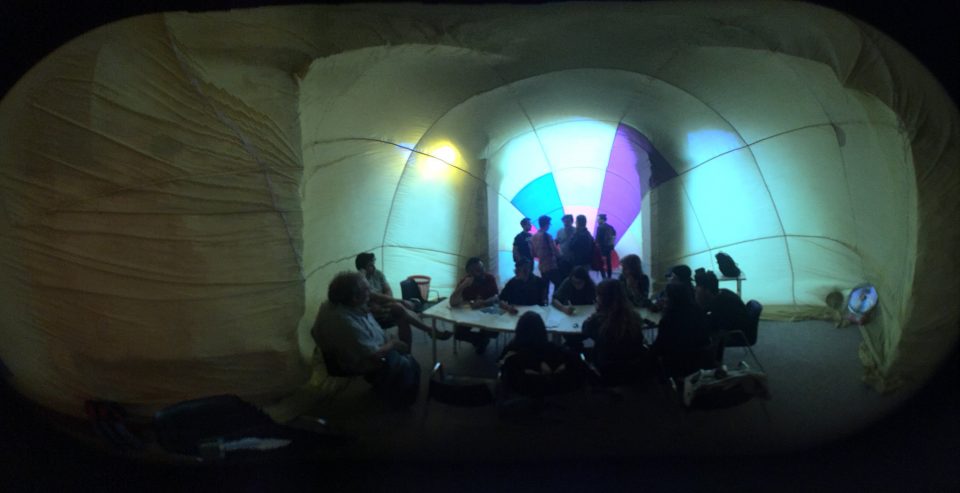 Over 200 the new lemmas were created by students during the week, and the Topia dictionary is now open to anyone.

Uploaded on the platform, the lemmas were designed and distributed along the city during the Materadio event, becoming part of the public space. 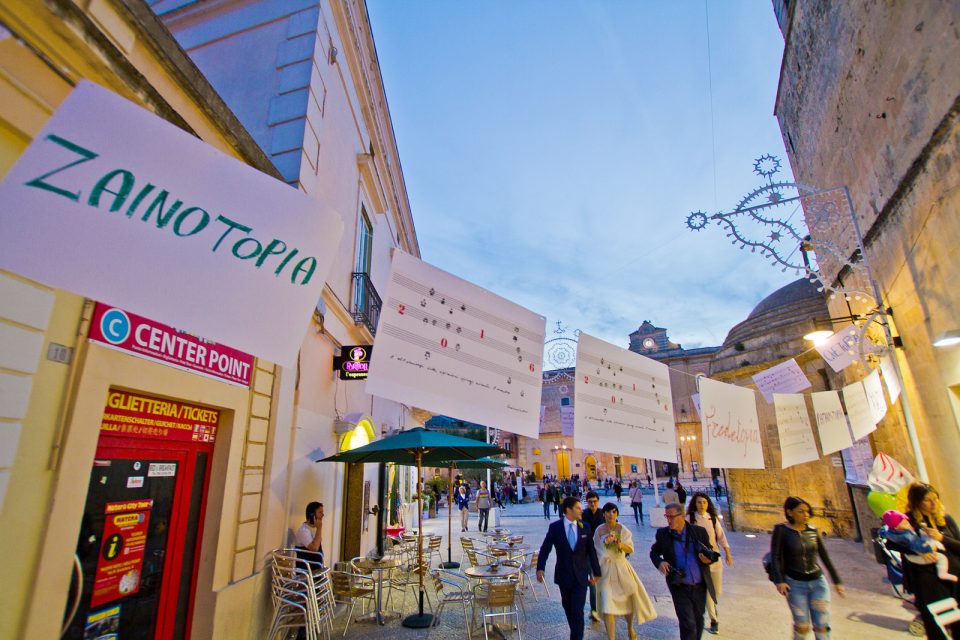 U-Topia, the lemmas distributed along the street in Matera

In parallel an equipe formed by Materelettrica (here reperesented by Antonio Colangelo and Marcello Laquale, under the supervision of prof. Fabrizio Festa), AOS/La Cura (Salvatore Iaconesi) and Concrete425 (Tommaso Cappelletti and Guglielmo Torelli) designed from scratch a projection mapping and a soundtrack for the ritual. 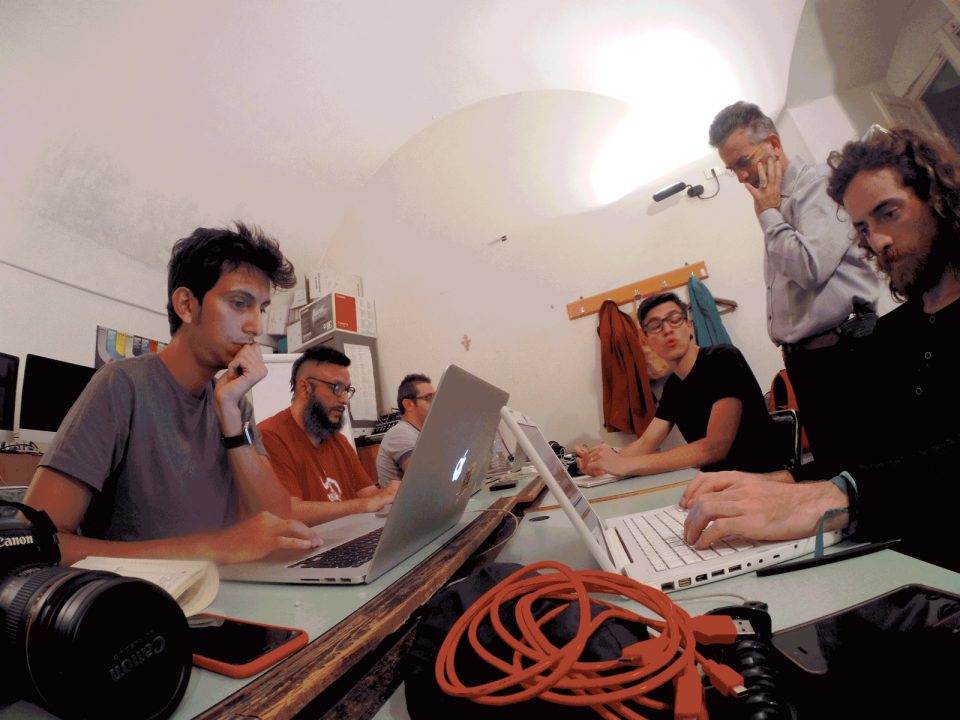 A mission impossible, successfully completed in less than 6 days . 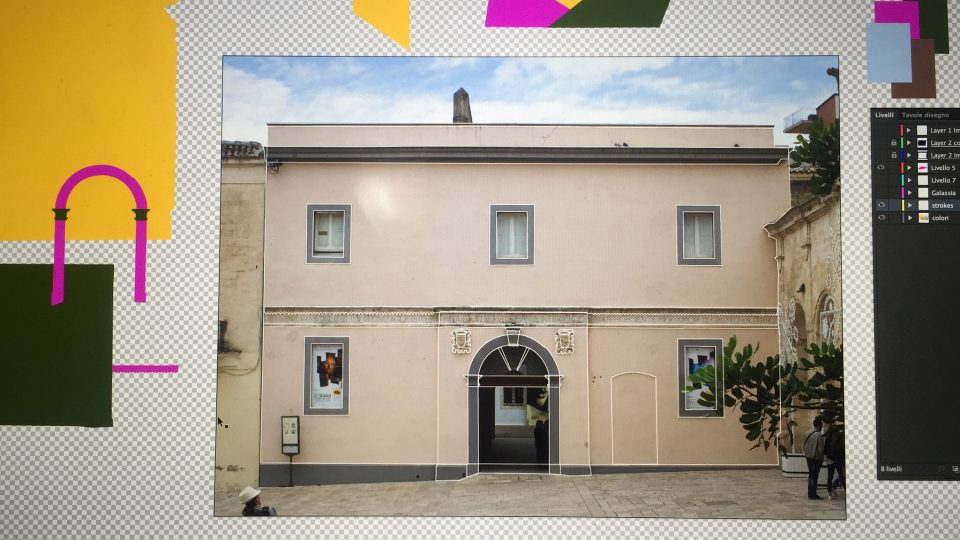 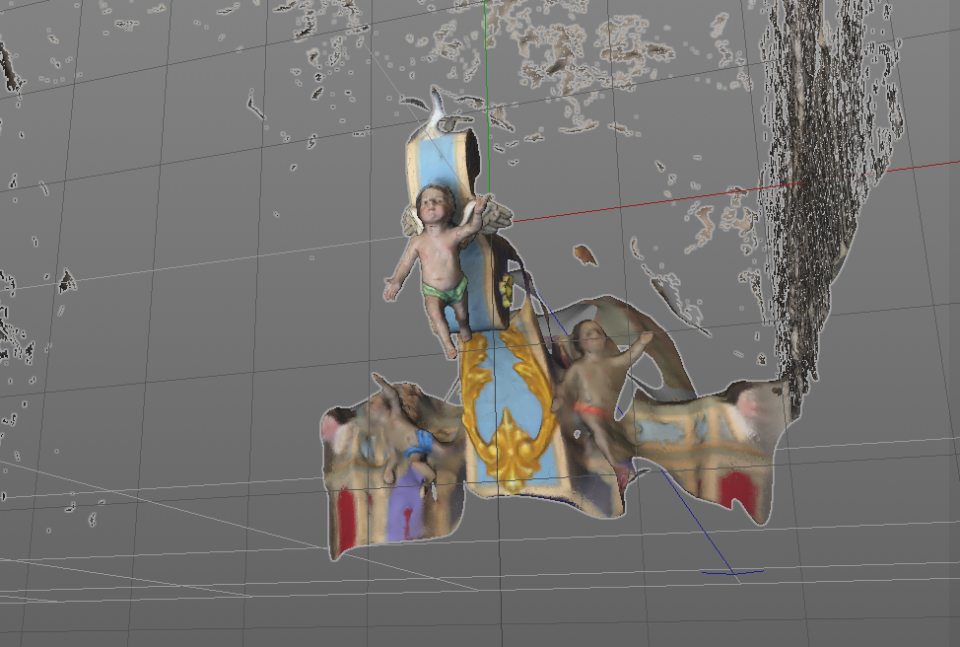 U-Topia, projection mapping: designing the 3D model for the “U” 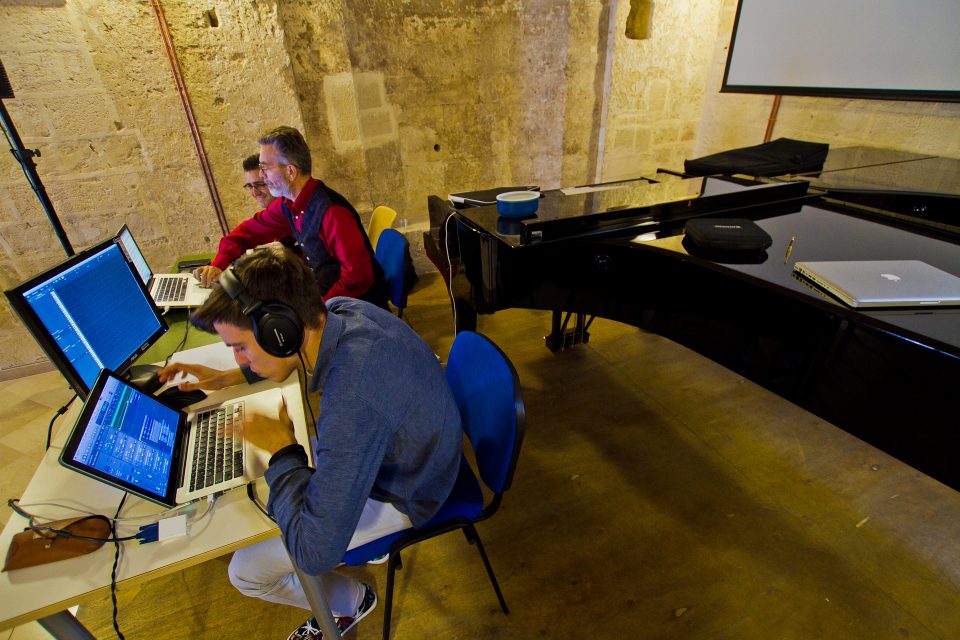 The ritual took place in Piazza S.Giovanni on September the 24th.

In the first part a procession – which we renamed as the “U” Parade – accompanied the sculpture from Museo Ridola to Piazza S. Giovanni, involving people across the street. 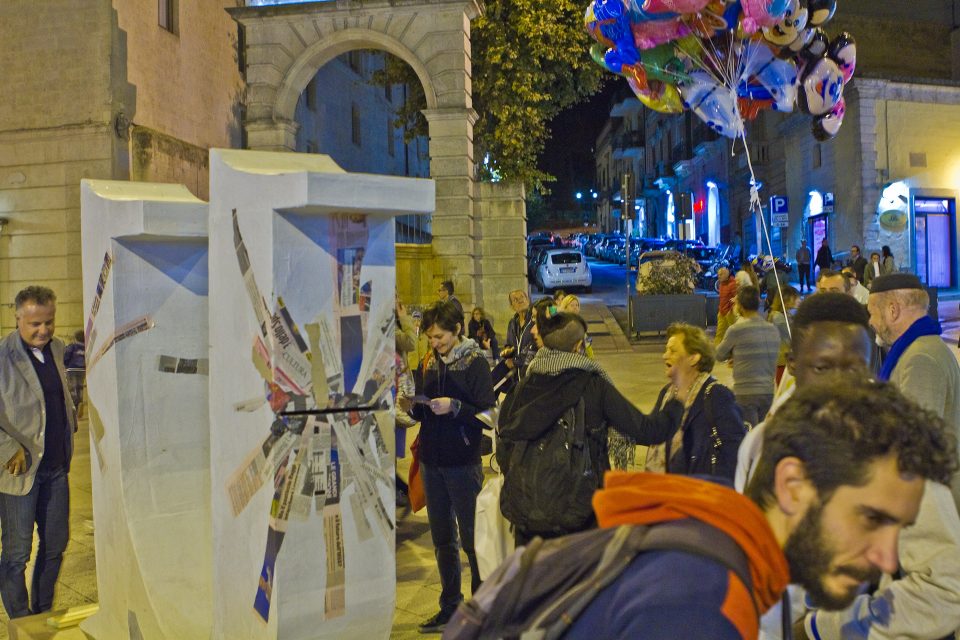 The giant “U” was in front of the main entrance of S. Rocco, an ex hospital and ex jail – now a cultural center – whose facade was choosen for the projection mapping 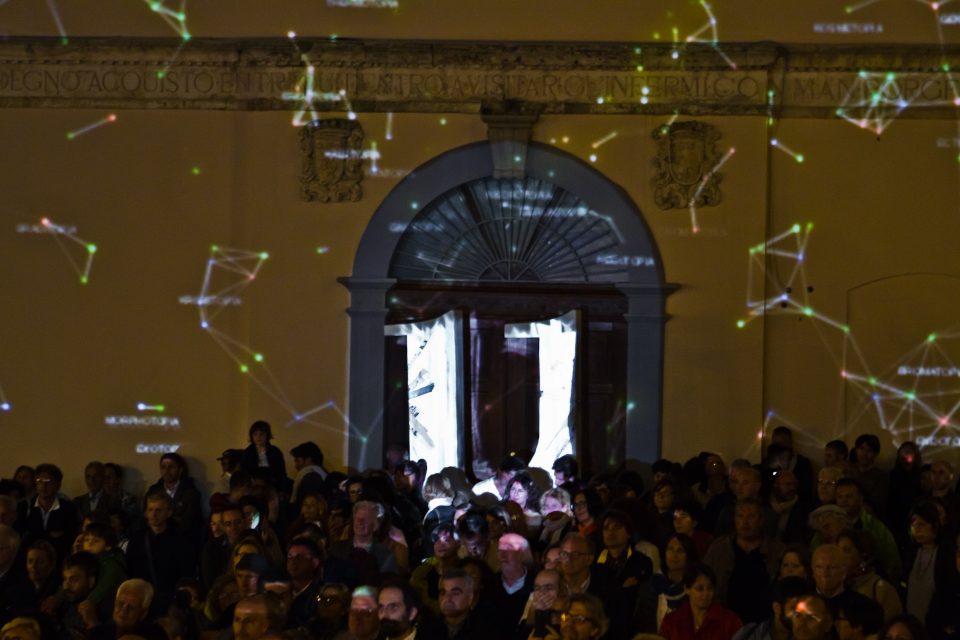 U-Topia: the “U” in from of the main entrance of ex-hospital S. Rocco

The “U” manifests itself in the world. It gradually grows disrupting the balance of his own universe: a sky of words made up of the new lemmas. 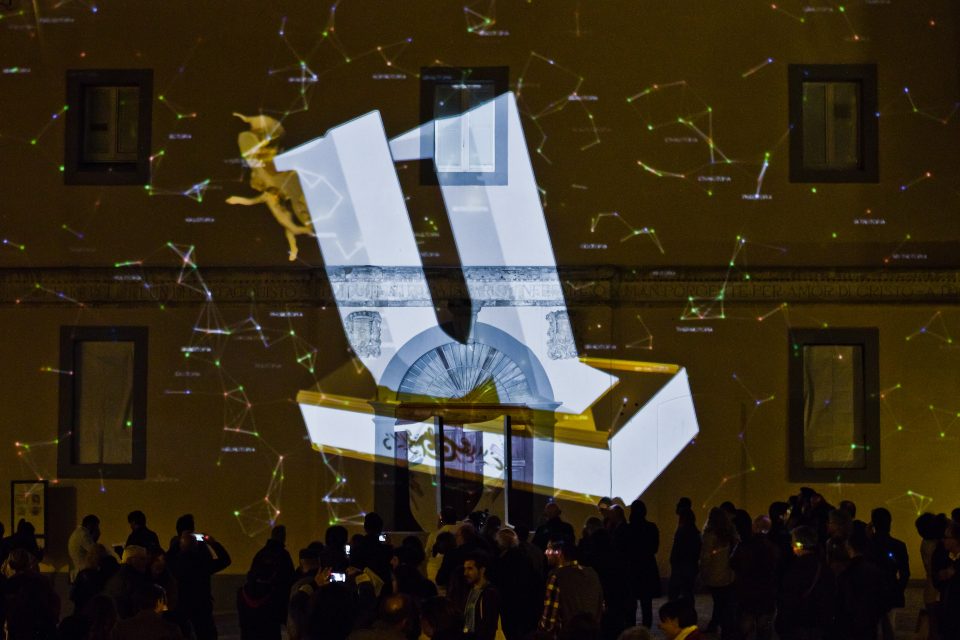 U-Topia, projection mapping: the “U” appears and grows in the universe, a skye made of words

The constellations of words begin to crumble … 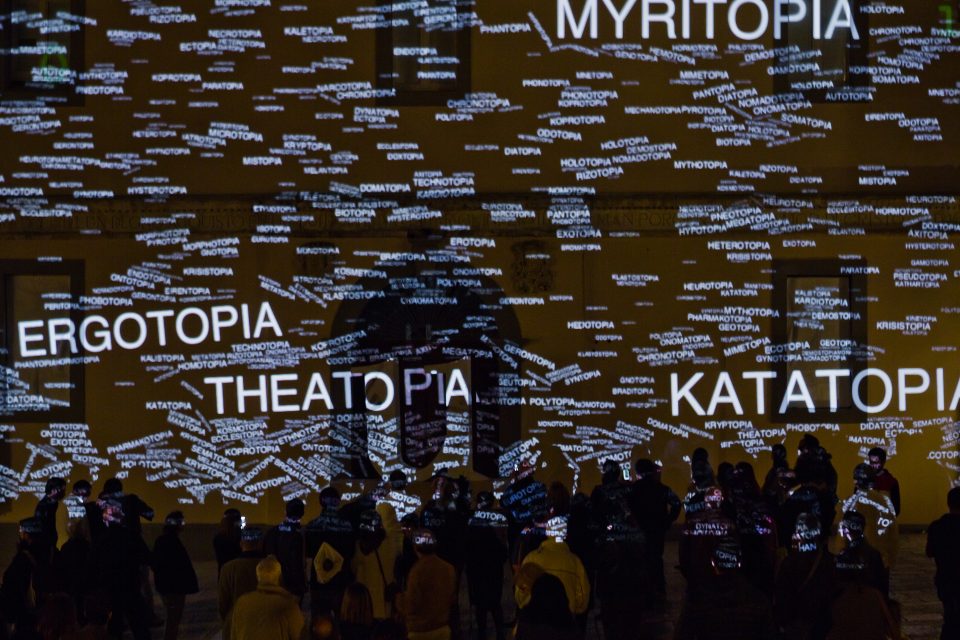 U-Topia, projection mapping, act 2: the constellation of words are crumbling

Until it comes into the picture “Topia” (the “place”) which raises and fight, creating a new generative language contrivance. 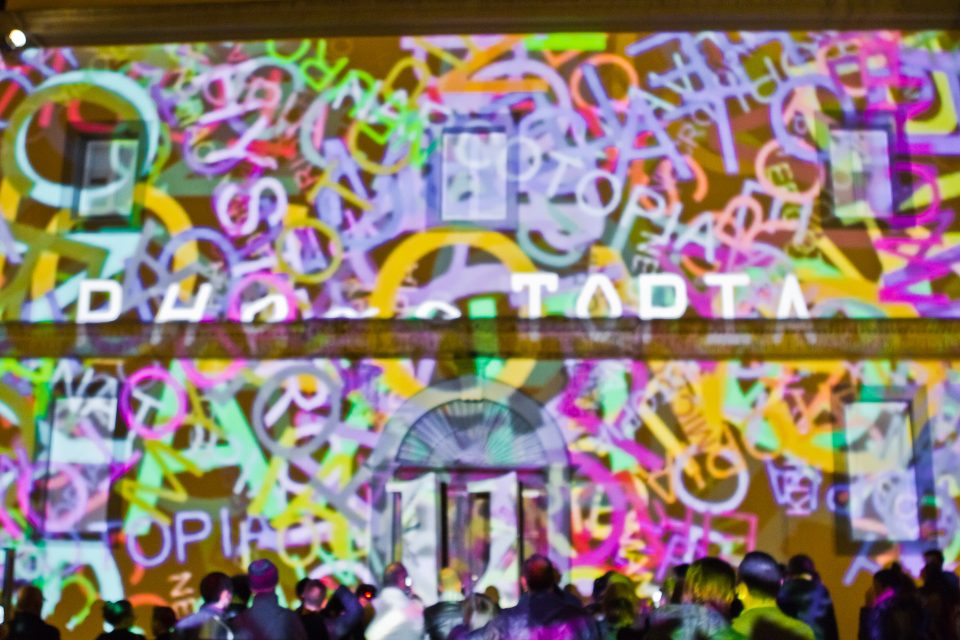 U-Topia, act 3: the raise of Topia

For the “U” is the end, but it is also a beginning.

Moved from its pedestal, the “U” makes its way into the square; people create a circle around the sculpture.

A brief silence before the blast of a trumpet. 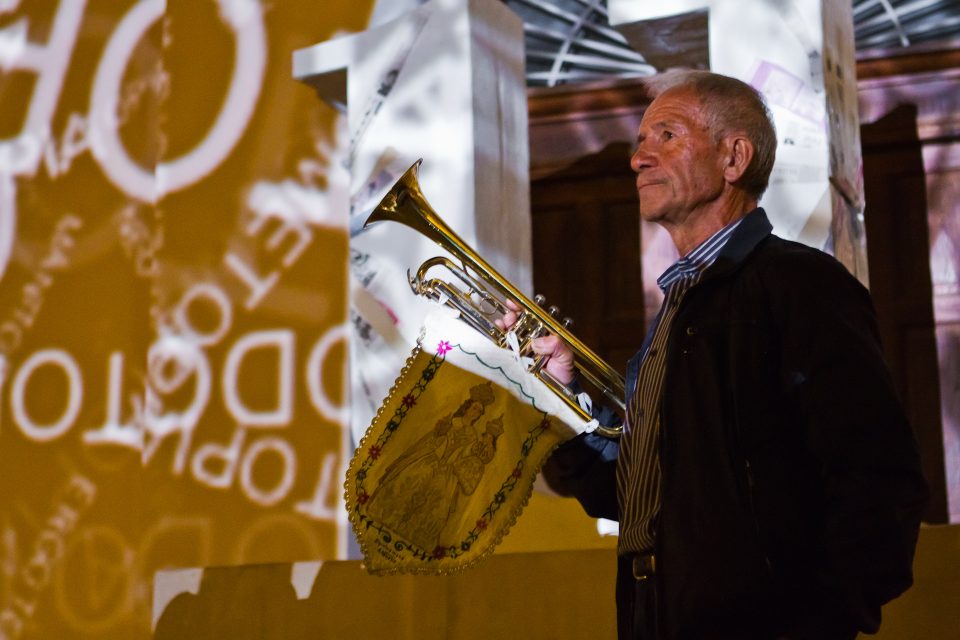 U-Topia: Eustachio Barbaro and the trumpet

Eustachio Barbaro, who for 30 years gives way to tha traditional “strazzo” of the “Carro della Bruna” with the same trumpet, celebrates the destruction and rebirth of Utopia.

The square’s mood immediately changes: the call is readable, the act perfectly decipherable for Materans, although no one has ever seen the “U”.

You just waiting for the trumpet upholds the moment: “strazzare” (to rip up).

We pounce on the “U” from when they start to leak out the cards with words written in those days. Utopias of Matera students who slip from hand to hand, murmuring, stolen. Someone seeks his own to take her home. 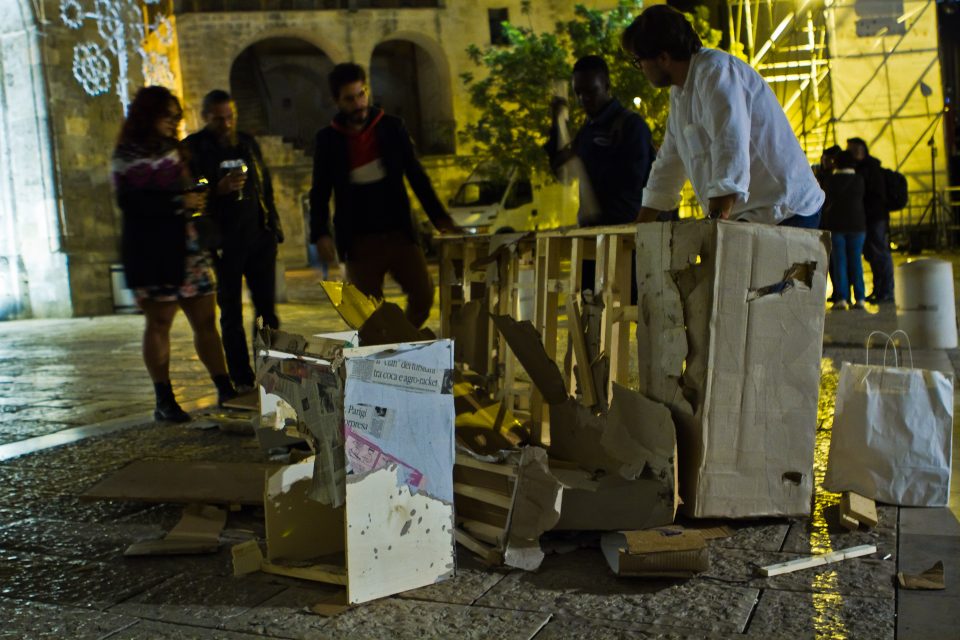 U-Topia: the “U” destroyed after the “strazzo”, Piazza S. Giovanni (Matera)

18-minute performance that mixed images and sounds, technology and popular traditions, old and young, Matera and the world, by welding the linguistic and digital body of the dictionary to the human and architectural body of the city.

A ubiquitous and syncretic ritual that can live, evolve and regenerate each year, making Matera the capital of recovered utopias.

Or, stealing the incipit of Utopia dictionary, “the place of desires and meanings built by the community.”

Meanwhile, wherever we are, we can add new entries to this connective and collective work.

Utopia on the news