Augmented Sensibility: a Summer School with La Cura and the interconnected life on the planet 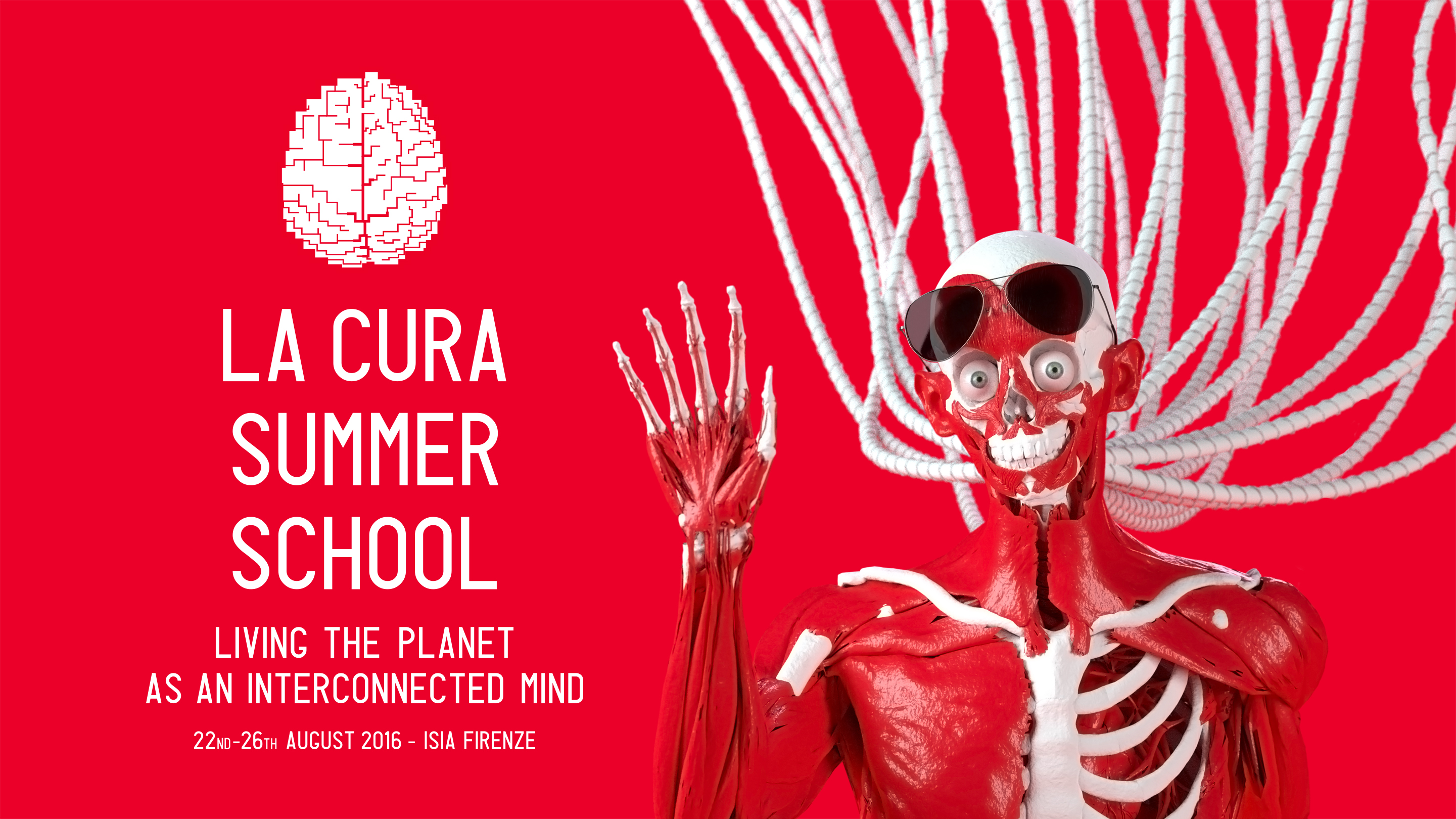 La Cura, with the collaboration of Nefula, ISIA Design Florence, La Triennale di Milano, Condividi la Conoscenza, Artribune, FabLab Toscana, Scuola Open Source, Human Ecosystems, Parcodiyellowstone and VideOfficine, will hold an international summer school on the possibility to create an augmented sense which is able to interconnect people and their expressions about how they live the planet. The results will be exhibited at Milan’s Design Triennale for the Condividi la Conoscenza event.

This is the website of the Summer School: http://la-cura.it/summerschool/eng/

Look on the website for the program and HERE for a complete press kit.

More information about the concept can be found further below. 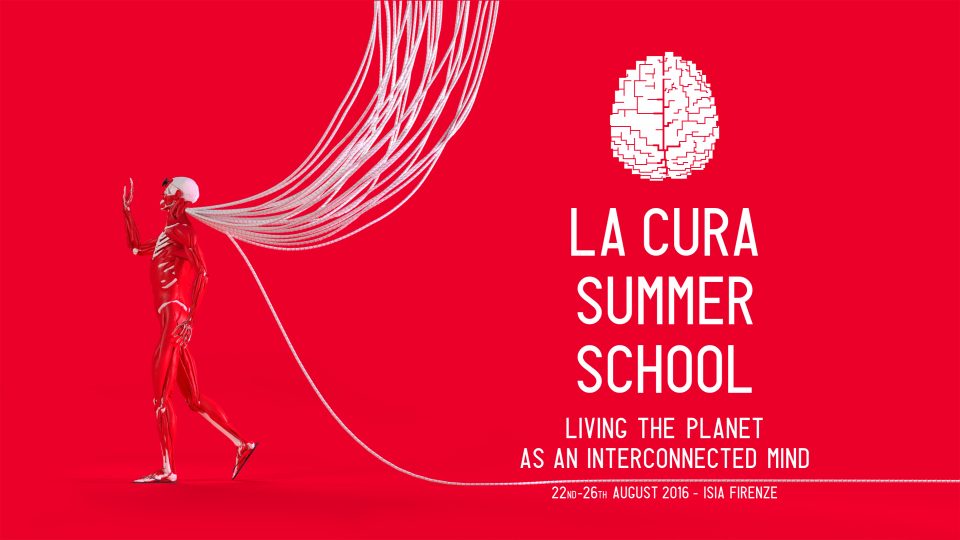 Concept of the Summer School

The Summer School acts within the framework of La Triennale Di Milano’s theme of “Design After Design” and of this year’s theme for Condividi La Conoscenza’s: the exploration of how we “inhabit the city, inhabit the planet”.

We will create a wearable open source technology through which we will be able to collect planetary expressions about how people inhabit the planet and materialise them on our bodies, as a new tactility. What are the emotions, issues, worries, desires and expectations which people express when talking about “inhabiting the planet”? How can we “feel” them on our bodies? How can we transform this novel tactility into a meaningful experience? How can we make it into an experience which we can use to promote our rights and freedoms? How can it become an active experience, through which interconnection goes both ways?

We will create the wearable technology, an installation which will materialise this sense in the public space, and a series of real-time information visualisations which are designed to bring this sensibility into the public info-scape.

All three components (wearable tech, installation, information visualisation) will be exhibited at La Triennale di Milano in its ExpoGate location, during the Condividi la Conoscenza event.

Ecology is the scientific analysis and the study of the interactions between organisms and their environment. It goes well beyond environmentalism, and it is a science with deep connections with Systems Theory. Starting from the analysis of the relations between organisms, things, processes and behaviours it produces understandings and knowledge about the balances, diversities, dissonances and dynamics which manifest themselves while living the planet. Ecology studies ecosystems: natural, urban, organisational, technological, informational, communicational and their intersections, influences and tensions.

Ecosystems are ecology’s fundamental dimension, as is the understanding that comprehending how they work requires the capacity to syncretically traverse and interconnect disciplines, approaches and points of view.

As profound is the connection with Cybernetics, the science which studies the phenomena of self-regulation and communication, which finds one of its most interesting applications in Ecology: to study how diversity and plurality can co-exist and how the life of ecosystems is possible through their presence.

To live the planet, becomes an act of observation and experience of the ways in which diversity creates the information and communication which are able to activate the mechanisms of self-regulation which are needed for the survival and the dynamic health of the ecosystem: in natural and urban environments, in people’s lives and the ones of organisations.

Both sciences, Ecology and Cybernetics, pose fundamental questions on the essential interconnection between subjects and their environment. When it becomes clear how the survival of the “single” depends on its possibilities to establish interconnections with the rest of the ecosystem, it becomes evident how concepts as “identity” go into a state of crisis, describing a scenario in which boundaries become blurred and in which discerning where one subject ends and the other one begins becomes progressively problematic.

This is an effect which is visible in the contexts researched by ecology and cybernetics, as shown, for example, by Francisco Varela’s and Humberto Maturana’s definition of autopoiesis, or by Gregory Bateson’s concept of Ecosystem of Mind: the ecosystem is, to all effect, relation, dynamic interconnection.

These few concepts become fundamental for our objectives. The Ecology of Mind and, thus, the ecology of ideas, where evolution is a process aimed at ensuring the survival of the system through the performance of complex relational networks whose information exchanges through communication are the homeostatic media which maintains the dynamic equilibrium of the system. Communication is the means through which connections and relations form, and, thus, the system’s evolution and transformation.

In the era of hyperconnectivity this notion rises to even further importance.

For the first time in the life of human beings we are able to establish global connections which are able to embrace the whole planet, through digital communication and information.

Therefore, it becomes potentially possible to interconnect with the whole planet.

We are currently naked, skinless and defenseless: we don’t have any control on the ways in which we interconnect digitally, leaving the management and control of our connections and relations to a few large operators.

On the other hand, those same technologies and networks can be used to create actions which are able to represent us and through which we can determine ourselves, as individuals and as participants to society.

How is it possible to create new sensibilities and aesthetics which enable us to perceive planetary interconnectedness?

How is it possible to create communicative dynamics which interconnect bodies, environments, objects, processes and the expressions of human beings, tendentially implementing the Ecosystem of Mind at planetary level in ways which we can determine and which promote our freedoms and liberties?

How could these possibilities influence the ways in which we actively inhabit our cities and our planet?

This is what we will experiment during the Summer School of La Cura: to create an augmented sense, to use technologies to explore the possibilities to collect the planetary expressions about how people live their cities and planet, and to transform them into a new sense, a new tactility, a new sight, smell, which can interconnect.

And, thus, to explore what Bateson mentioned talking about the Ecosystems of Mind and about the ways in which it is possible to catch the opportunities which they make available: creating a new aesthetic, a new concept of beauty, the beauty of that which interconnects.