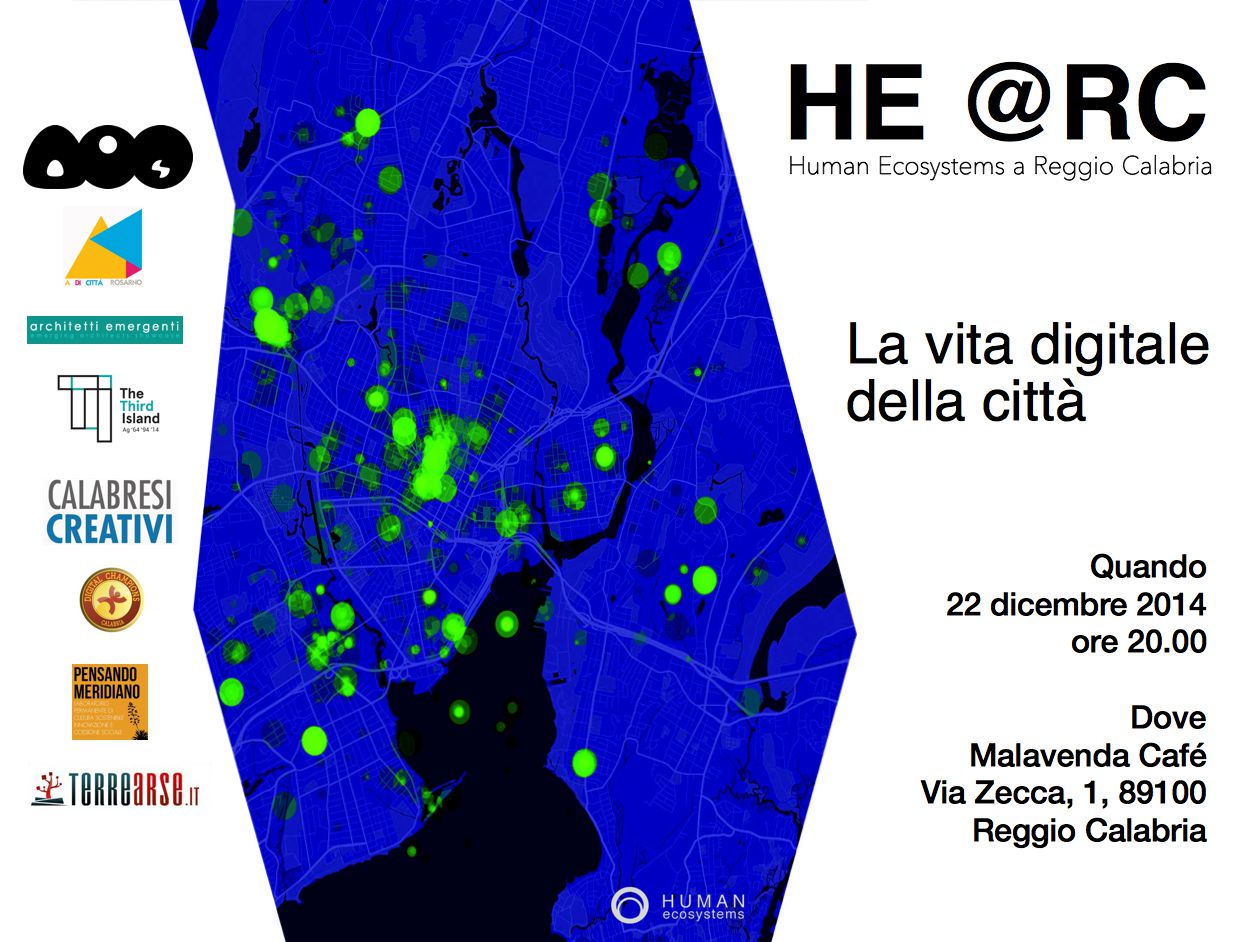 The Human Ecosystems project is landing in Reggio Calabria, the beautiful city at the tip of the boot of the Italian peninsula, full of history and culture.

Here we will explore the opportunities which can be found by gaining more understandings about the digital life of the city, together with citizens, organisations, city based associations.

Here below are the Press Release and the biographies of the participants to the event (doc format, in Italian):

What shape does the relational ecosystem of Reggio Calabria have? Which nodes constitute it? Which emotions do citizens express on social networks? How do they interconnect? What could happen if a real time source open data would be made available to show the meeting places in the city of different cultures and communities; their influences; their bridges, hubs, experts, boundaries, connecting and separating them across themes, opinions, places and times?

They may look like questions coming out of science fiction, but in some cities of the world (such as Sao Paulo, Toronto, New Haven) they are already a reality.

We will talk about all of this on Monday December 22nd at 8pm at the Malavenda Café together with Oriana Persico, digital communication expert and co-founder – together with Salvatore Iaconesi, robotic engineer and hacker – of the Art is Open Source network, which created the Human Ecosystems project.

Human Ecosystems enables smart cities and smart communities observing the relational ecosystems of cities in real-time, to promote citizen participation and activation, as well as peer-to-peer and ubiquitous innovation processes. The project captures in real-time citizens’ public conversations on major social networks, in 29 languages, visualises them through info-aesthetic representations and generative sounds, and transforms them into a source of Open Data which is available to anyone, to make digital public space accessible and inclusive: an Ubiquitous Commons.

In fact, at the present time, it is only large operators and the managers of the large social networking platforms who have access to this citizen-generated data, to be used for their sole strategies.

Since its launch in 2013, Human Ecosystems has been used to create participatory policies, new forms of governance, urban planning, research, education processes, art installations and performances.

Back from Yale University, where Iaconesi held a fellowship, Persico will open up a dialogue with some of the major associations and startups of the city, who confront on a daily basis with the issues of urban regeneration, participative design, open data and social innovation: Letizia Cuzzola, president of Terrearse Lab, the association which promotes the “Sud Altrove” project; Giuseppe Mangano, co-founder of Pensando Meridiano, the Laboratory for Sustainable Culture, Innovation and Social Cohesion which is implementing the Reaction City project; Angelo Marra, who has just been nominated Digital Champion for the city of Reggio Calabria and, thus, the ambassador for the city’s digital innovation; Antonio Ottomanelli, artistic director of The Third Island project, starting from Calabria to create an observatory on the major public works in Italy; Domenico Rositano, president of Calabresi Creativi, winner of the MIUR 2012 grant with the project Smart DMO; Giuseppe Rudi, co-founder of Architetti Emergenti, winner of the Culturability 2013 grant; Eleonora Scrivo, territorial responsible for Action Aid, constantly active on the issues of transparency and participation through Open Data.

The A di Città Rosarno association collaborated in the realization of the event, in its effort to use participatory urbanism as a tool for citizen awareness.

The moderation will be performed by Josephine Condemi, Reggio Calabria born journalist (on Nòva – Il Sole 24 Ore), passionate about online and offline networks, and about social innovation.

Thanks to the support provided by the Laboratori Creativi.net it will be possible to follow the event live in streaming and in live-tweeting using the #humanrc hashtag.

Virtual is potential. Making it become real is our responsibility.