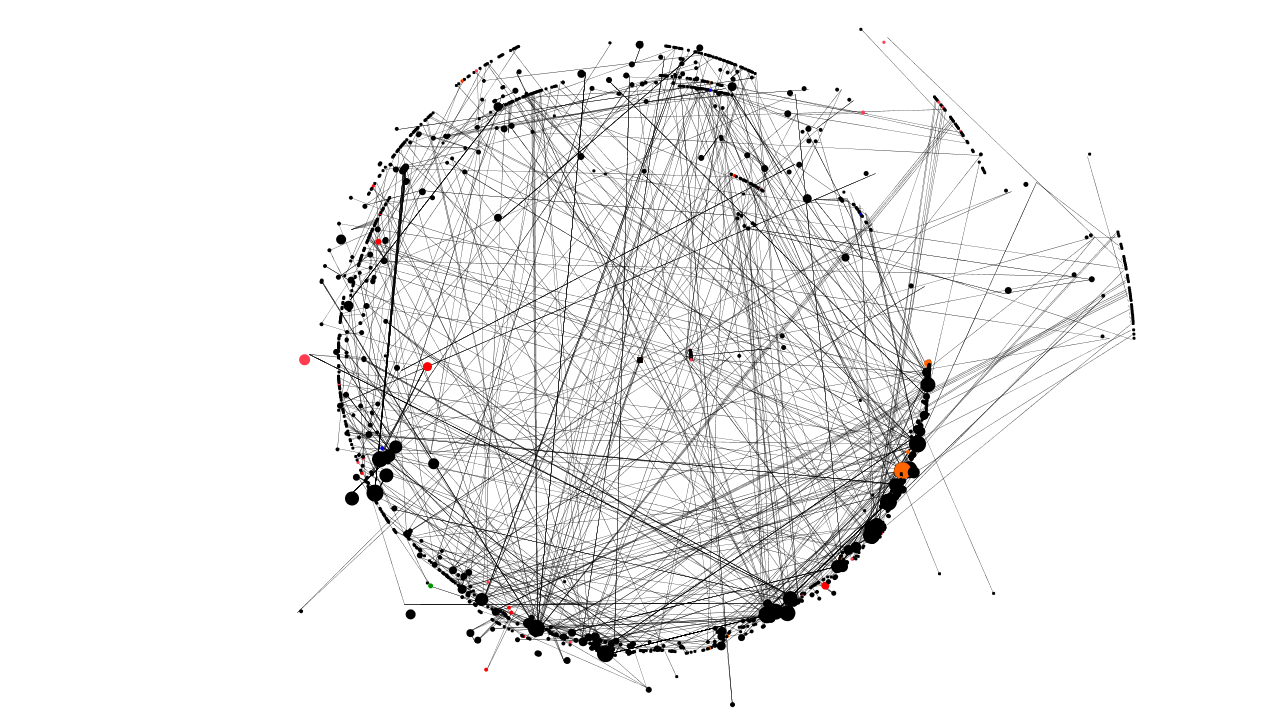 An information visualisation built using the Human Ecosystems will be featured at the Gallery Project, in Detroit, for the Unseen exhibit.

10 Minutes in Detroit captures all the social networking activity in the city of Detroit on June 30th 2014 and visualises it in a series of different ways, using the Human Ecosystems ( http://human-ecosystems.com/home/ ).

Unseen is curated by Rocco DePietro and Gloria Pritschet

The quest to see lies at the heart of human urgency. To breach the barrier between the visible and the invisible is compelling, emotional, informative and even magical. This process of discovery has always driven thinkers and image makers: artists, scientists and philosophers, from astronomers to nanotechnologists, from documentarians and data analysts to planners and prognosticators. As the unseen becomes seeable and seen, a pivot occurs, revealing and demanding irreversible change. No one who has seen is ever the same.

The invisible may be unseen for many reasons. It may be purposely covert for socio-political or military reasons, or to hide corruption or actions contrary to the public good. It may be inadvertently unseen because of the limits of technology or its applications, or the limits of human perception or comprehension. It may be willfully unseen from lack of curiosity, imagination, salience, awareness, or limitations of perceptual processes.

Many contemporary artists and scientists are dedicated to expressing the unseen and to making the invisible visible. They may be motivated to advance their disciplines, or may be fascinated by the prospect of discovery, or the challenge and adventure of harnessing emerging technologies to express ideas. They may believe it is important to uncover secrets, to disclose purposely hidden information, some of which strikes at the heart of democracy, personal privacy, individual well-being, individual freedom, the public’s right to know, and the health and survival of planet Earth. They may seek to awaken consciousness to initiate conversation about outcomes, implications and possibilities.

This exhibition invites the participants to visualize and express the unseen, and to comment on the impacts of the transformed vista.

In Unseen, participants’ work may express a range of conceptual dimensions. For example, they may be disclosing the purposely hidden or the inadvertently unseen. They may seek out significant and impactful information or simply delight in the creative, visually beautiful or surprising. Participants’ work may also express a range of thresholds of visibility. For example, they may be exploring micro, meso or macro levels of invisibility, from microbial and sub-atomic worlds to social, global and universal phenomena. Several examples follow:

The Hubble and Kepler telescopes are discovering evidence of earthlike and superhabitable planets, whose conditions for sustain carbon-based life surpass those of earth. However much of space is unseen by us, for intentional covert reasons or because we lack the means to perceive it.

In his book Dark Skies, Trevor Paglen, uses time-lapse photography with super sensitive equipment to capture images of military spy satellites streaking across the night sky. Photographed over a landscape reminiscent of Ansel Adams, the images are chilling reminder of what’s up there unseen.

Remote sensors and sonar probe deep within the earth and below the ocean floor in places like the arctic (where over 90% of Russia’s natural gas is located) mapping caches of gold, uranium, and rare earth minerals. Private corporations often own the proprietary maps. These same technologies offer crucial information to science, for example, in marine and desert archeology and research.

Environmental pollution related to deep earth mineral and gas extraction, and droughts; ancient aquifers are drained, the land debased, the water supply is poisoned and behind the guise of efficiency and technological advances.

Disadvantaged individuals and groups that are invisible due to personal attitudes, social policy, and a history of neglect, e.g., the elderly and incarcerated black youth.

Architects and artists are working to reinterpret space in cities. Art is Open Source depicts the layers formed by people who uniquely shape the space through their use of mobile devices, ubiquitous technologies, and social networks.

Genetic research and engineering have enabled modification and selection of traits in foods, opening broad argument about health, safety, the power of chemical companies, and international meddling.

Google Earth Outreach is mapping indigenous people around the world. The project protects 600,000 acres of the Surui of Brazil from exploitation, illegal mining and logging Photographer Martin Schoeller, with National Geographic, is bringing the issues facing lost tribes to global attention. Impact of such projects on their way of life is uncertain.

Animal research has revealed highly differentiated sounds and as yet untranslated complex language among elephants, dolphins, and other mammals. Increased understanding of animal language, emotion and culture challenges narrow preconceptions of animals as lesser beings, as food or objects for our entertainment.

American intelligence gathering is largely covert and secret. Edward Snowden, in revealing the extent of information collected about ordinary citizens, awakened awareness and initiated a change in generally held assumptions.

Cyber warfare, increasing in sophistication and run by rogue and government sanctioned hackers, challenges the security of nuclear facilities, financial systems, and personal data. There are no visual maps for understanding cybercrime.

Secret drone strikes in Yemen or Pakistan are supported by networks of underwater fiber optic cables, military satellites and command centers, remote sensing and vision systems, and superfast computers. Congress’ decision to continue their control in the CIA, rather than to transfer it to the Defense Department insures that they remain secret.

HAARP (The High Frequency Active Auroral Research Program) is an ionospheric research program jointly funded by the Defense Department and private contractors. HAARP analyzes the ionosphere and investigates the potential for developing ionospheric enhancement technology for radio communications and surveillance. Some say one of its goals is to transmit electricity wirelessly. Based in Gakona, Alaska, some experts say that HAARP is capable of modifying weather, disabling satellites, causing air crashes, earthquakes, droughts, storms, floods, and even disease.

There is a whole category of contemporary art this is full of technical and creative surprises. These works might involve hidden images, inference of the presence of the objects and content when they are not there, and movement that alters the visual and perceptual field. Some can only be fully realized with the participation and imagination of the viewer.