Micro Histories of cities and Ubiquitous Commons, at #visualize in Lecce

Join us for #visualize, more than one week of data, in Lecce (Italy) from May 8th to June 18th 2014, in the Palazzo Turrisi-Palumbo (via Marco Basseo 1), for an incredible series of workshops and lectures about visual journalism and data, in which we will create one full project of our own.

Here is the program for #visualize: http://www.gliadditivi.org/visualize/program.php 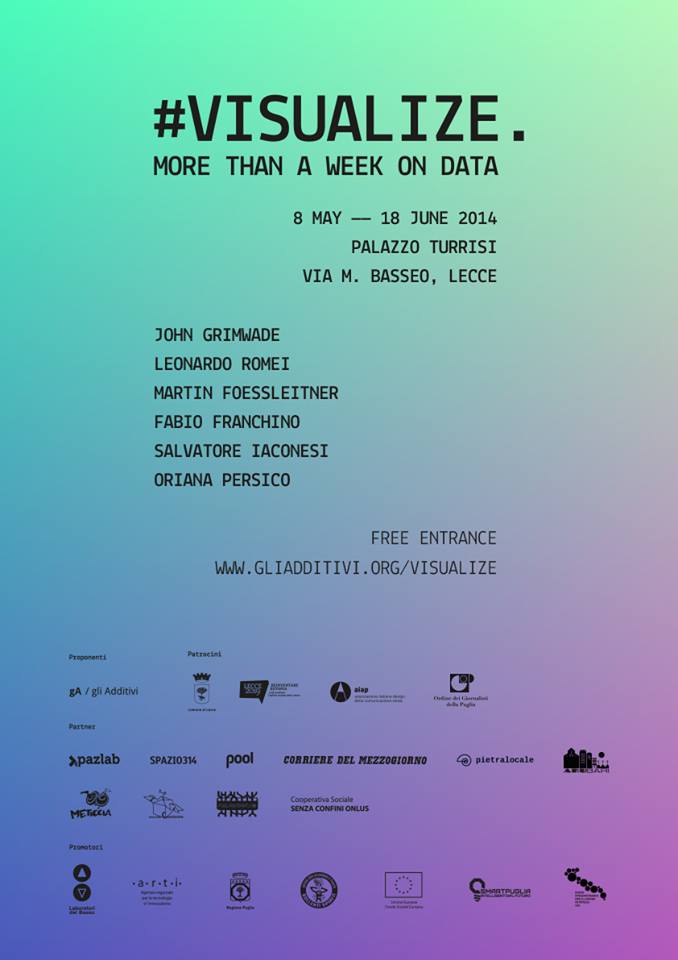 Visualize, more than a week on data

Our talk will be on the 16th of June 2014, and it will be mostly based on the Human Ecosystems project, and on the idea of using the real-time, human-generated infoscape of the city to create a novel form of Public Space, which we call Ubiquitous Commons.

In the workshop, running from  June 16th to June 18th, we will use the Human Ecosystems to build an actual project.

You can use this link to subscribe to the workshop: http://www.gliadditivi.org/visualize/iscriviti.php.

Here below is some info about our intervention at #visualize:

Each day, we generate thousands of information elements through electronic transactions, interactions with digital systems and social networks. Often we don’t realize it.

This mass of information constitutes the millions of micro-histories of our cities, in real-time, manifesting themselves during our everyday lives, while we shop or communicate using social networks.

Micro-histories unite to form macro-histories, the story of the city in which multitudes of people take part to an enormous data-symphony from which citizens’ changes, desires, emotions, vision and expectancies emerge, as well as the ones of organizations and administrations.

Through the Human Ecosystems project we observe in real-time citizens’ public expressions on social networks to describe the relational ecosystem of cities: the emergence of communities, of the themes which they discuss, and of their emotional expressions. This information can be interweaved with other sources of Open and Big Data, and with the flows of news and information, to enact a system in which cities – and their citizens – express themselves, and, most important of all, which can be used as a tool for participation, organization and planning, by everyone. A new common: the Digital Public Space of the city.

During the talk we will introduce the Human Ecosystems project, and the concept of Ubiquitous Commons. We will show how to harvest public information from social networks to describe cities’ relational ecosystem: the emergence of communities, the issues which they discuss and their emotional expressions.

We will confront with the legal, political, conceptual, theoretical, technical and technological scenarios according highlighting the opportunities raised by enacting processes of this kind.

We will introduce the current operative scenarios of the Human Ecosystems, and the ways in which we are using them in the cities of Rome, S. Paulo, Malmö, Montreal, Toronto.

We will show how this information can be published as a form of real-time Open Data, and how it can be used in conjunction with other sources of Open and Big Data to obtain results which are relevant for citizens, administrations, enterprises, artists and designers.

Strategic and narrative usage scenarios for the Relational Ecosystems of cities.

We will start from a practical issue (public transport, pollution, the job market…) to setup a working scenario for the Human Ecosystems, from the point of view of one of the possible subjects involved (citizens, enterprises, administrations…).

We will show how to interweave the data from the relational ecosystem of the city with other data sources to obtain peculiar and relevant information.

For simplicity, we will use the data that has been harvested in a specific city across a 6 month period, without getting into the implementation details needed to create a system for real-time observation and for natural language analysis. Nevertheless, these techniques will be explained and proper references will be given, together with the possibility to use the Human Ecosystems.

The harvested information will be used to obtain the two outcomes of the workshop: an info-aesthetic, complexity-oriented, visualization, and the description of a possible strategy for intervention onto the selected issue, using the Urban Acupuncture technique.

Desired skills for the workshop:

During the workshop we will use: