Anthropological Innovation: observing and understanding the mutation of human life 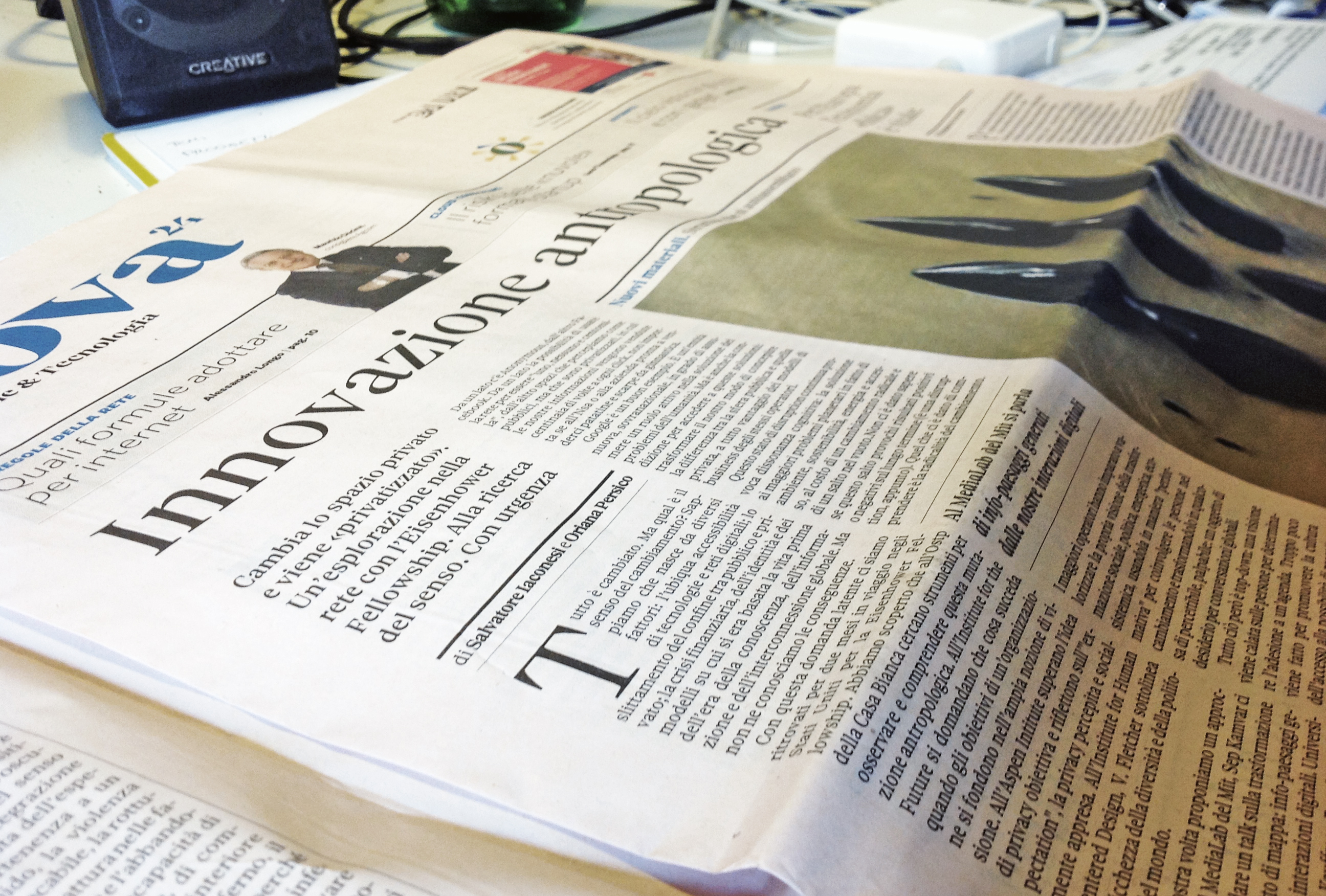 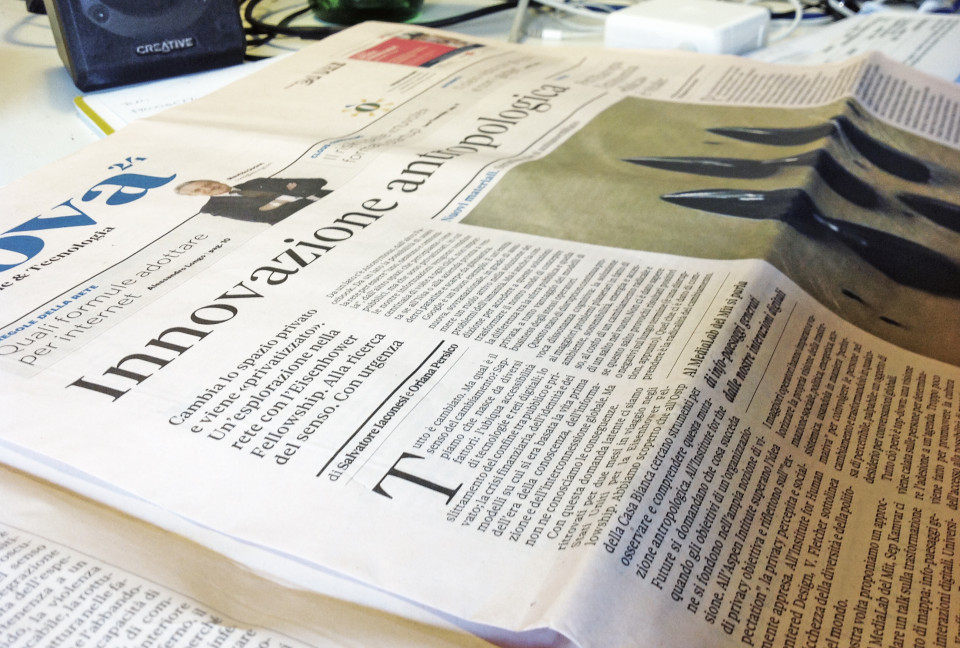 Our article about an Anthropological view on Innovation appeared today on Nòva24, the inset of Il Sole 24 Ore, Italy’s most influential financial newspaper. Our impressions after the 7 weeks on the Eisenhower Fellowship.

Here it is, below, translated in English and with some information and links added.

Private spaces change and they become “privatised”. A network exploration withe the Eisenhower Fellowships. Searching for meaning. With urgency.

By Salvatore Iaconesi and Oriana Persico

But what is the meaning of this change?

We know that it starts with the emergence of different factors:

But we don’t know the consequences.

With this latent question in mind, we set off for two months of travelling in the United States for our Eisenhower Fellowship.

We discovered that at the White House Office for Science & Technology Policy they are actively searching for tools and methodologies to observe and comprehend this anthropological mutation.

That at the Institute for the Future they are asking themselves what happens when an organization realizes that their objectives can be filled only by establishing a wider perspective on what it means to have a vision about the future.

That at the Aspen Institute they are starting to go beyond the idea of objective privacy, reflecting about the concept of expectation, our perceived privacy, the one that we have learned to recognize around us through society and culture.

That at the Institute for Human Centered Design, Valerie Fletcher highlights the importance and richness of the diversity and poliphonicity of the world.

We act as engaged observers, taking part in the conversations.

At the MIT MediaLab Sep Kamvar invites us for a public talk about the transformation of the concept of map: generative info-scapes (informational landscapes) created by harvesting ubiquitous digital interactions.

Organizations such as the University of Texas, the Kauffman Foundation, KCNext, Stanford, Harvard and Carnegie Mellon show deep interest when we offer to promote joint efforts to design and implement anthropological observation environments based on social networks, sensors and networks, to highlight recipes, emerging rituals, errors, opportunities and mutations.

But our search for meaning is not the mere sum of all these research approaches.

We now can benefit from the availability of many of the tools and methodologies we need to confront with the present, such as BigData, Open Data, the Cloud, social networks and infinite ways to share informations and knowledge.

Despite this, we all really have a hard time in promoting a transformation which is not about “consumption”, and which represents a real opportunity for the development and well-being of humanity.

A large part of the meaning that we were searching for can be found by observing the mutation of the ways in which perceive public and private spaces.

Hundreds of years of cultural development have taught us to establish reasonable expectations about the effects of our behaviour in public and private spaces. In the digital era everything changes: identity becomes a floating, fluid concept, expressing itself through spaces that we perceive as public or intimate, but which are really a privatized something else.

On one side is Anonymous, on the other is Facebook. And a whole lot is in between.

On one side is the possibility to use the network to be “uno, nessuno e centomila” (“one, no-one and one-hundred-thousand“). On the other side are spaces which we perceive as being public, but which are truly privatized, in which our information is sold hundreds of times each time we click, it doesn’t matter if to the NSA or to the companies trying to sell us french fries or sneakers.

Google is a good example for this. A new, super-national, entity which is able and willing to assume an active role in trying to find solutions for humanity’s most pressing problems (just think about the Google Cars project, assessing energy and transport, or Project Loon for digital divide).

But Google is also a representation of the condition which is needed to access these solutions: to completely transform the ways in which we perceive the difference that runs between the public and private domains, to adhere to a vision which is in total favour of business objectives of the service provider.

This state of continuous disruption causes cognitive dissonance: the solution to the world’s largest problems and issues – such as environment, sustainability, energy and access – at the price of a radical transformation and what is, to all effects, a jump into the void.

We are in no way able to predict the long terms effect of this jump into the void (it is a disruption, after all).

What is given is the possibility to comprehend the radicality of the transformation.

Large operators have learned to highlight and to valorize their vision about their proposed social, political, energetic and ecosystemic transformation, using it in “performative” ways to engage people in this mutation, thus making it perceptible and palpable: an object of desire for global conversations.

It is important to understand that this is a top-down process: a suggestive vision is made available to people to try and determine their active participation to a certain agenda.

Too little is being done to promote the cultures whose objective is to create the perceptive access to the possibility for joint efforts to design the present and the future, to comprehend and desire that this process takes place at civic level, to establish the practices of coexistence and participation.

For example, the practices of Open Innovation – in which challenges are published onto which wide communities gather to collaboratively find solutions and answers – don’t have a whole lot to say about the Hows and Whys that will enable those same communities to let their own challenges emerge, with the objective to improve the practices for coexistence among human beings.

The dynamic interweaving of the relations in human ecosystems goes well beyond what can be obtained by counting hashtags on Twitter.

It is about perceiving and using the anthropological complexity of communities and societies.

And it implies the possibility of conceiving radical transformations that will enable and support the opportunity for coexistence of the recombinant communities which constitute the digital era.

And this is a reflection on which the Mediterranean, with its mix of cultures and approaches can have a lot to say, share and give. 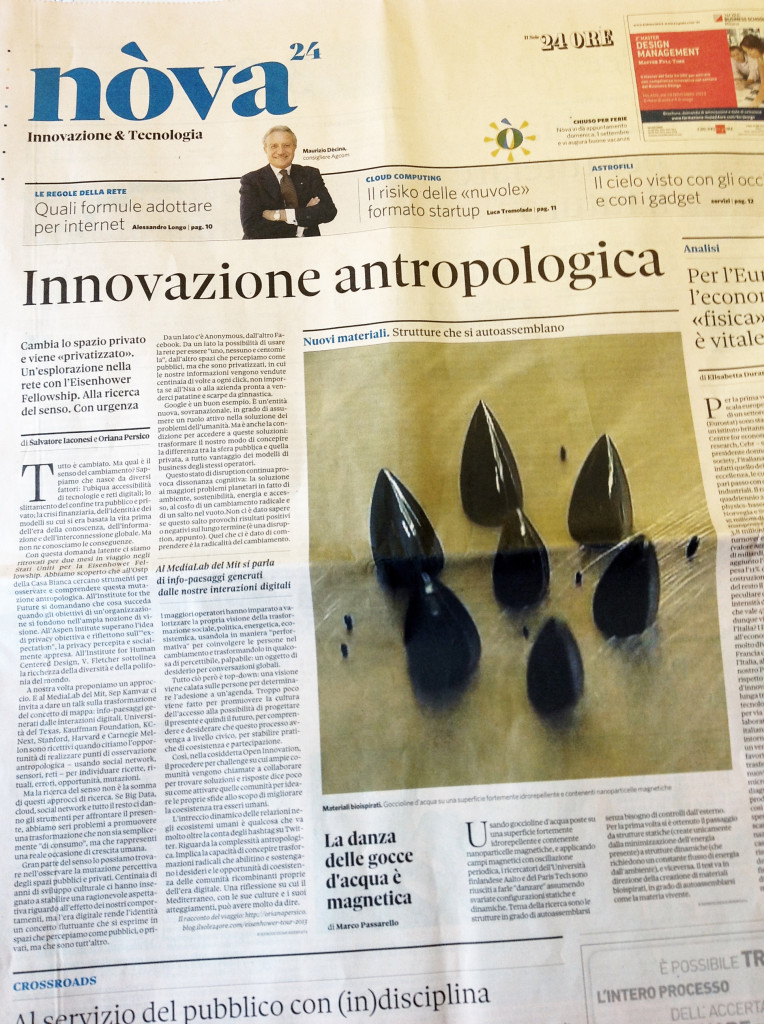