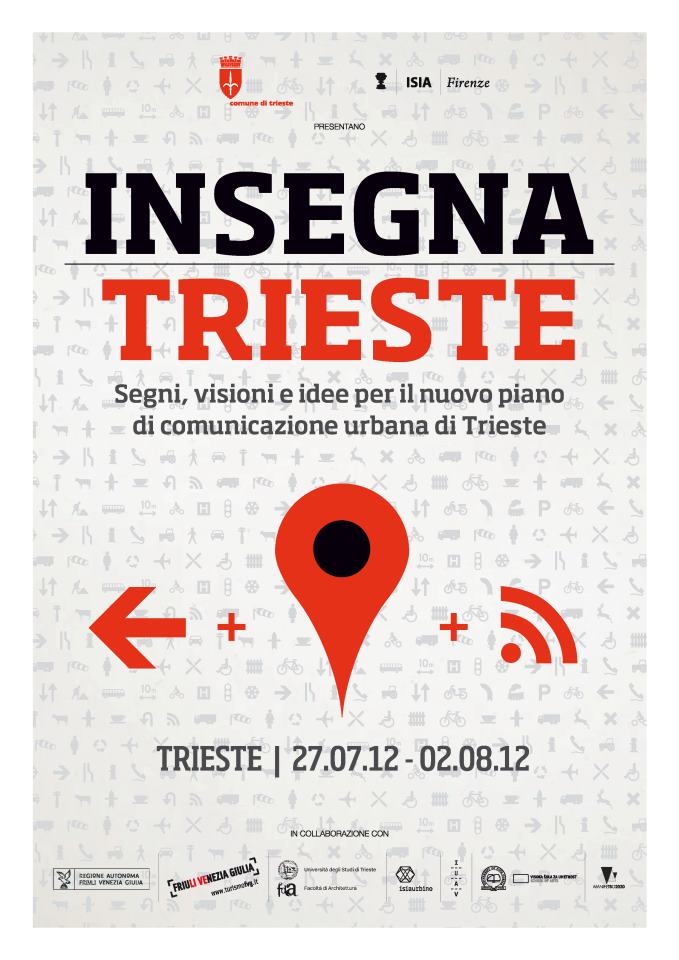 a workshop in trieste

We will be in Trieste from July 27th to August 2nd for “Insegna Trieste” a workshop to imagine and design the future of urban information and communication for the city.

Organized by the City Administration of the City of Trieste and by ISIA Design Florence, and with the collaboration of the Regional Administration of Friuli Venezia Giulia, the Faculty of Architecture of the University of Trieste, ISIA Urbino, IUAV University and the University of Nova Gorica the workshop will gather students to explore the city of Trieste from a new point of view, and trying to answer the question: “What is the information architecture of the city, as interpreted from a variety of cultures and points of view? How is it possible to define strategies and methodologies to design a system of signs, technologies and methodologies to represent it in meaningful ways? What is the future of urban signage?”

Urban signage is the street-interface for the city’s Information Architecture.

Information Architecture is a heterogeneous combination of different processes, including organization, categorization and the creation of navigation schemes in an Information System.

In the current scenario we can imagine to extend the set of techniques, methodologies and technologies which were classically used to design urban signage, and to include a wider, holistic, set of considerations into the discourse.

Ubiquitous technologies, tagging, augmented reality, urban screens and other technologies can be used to radically transform our experience of cities, as we navigate through streets, landmarks, businesses and opportunities for socialization, entertainment, culture, information and relation.

It is possible to embrace a holistic approach by taking into consideration the passage from Data, to Information, to Knowledge, to Wisdom.

from data to wisdom

Data, in city navigation, is composed by the positions of landmarks, streets and buildings, by the opening times of venues, by the presence of toilets and services. Or, in general, by discreet elements telling us what we know about the various things which are found in the city.

We can analyze elements of data to find relations among them. By interconnecting data in network of relations we can describe information. Information is a structure of data, a set of relationships among its elements, forming a network according to a certain strategy.

But we can go further. We can observe how data relates to other data to form information according to a series of recurring patterns. This is a valuable process, as it allows us to become aware of these patterns and to have a more useful point of view on reality, being able to understand information. This process is commonly defined as knowledge.

By understanding the principles according to which these patterns occur, we gain an even deeper understanding of reality, which we common refer to as wisdom.

Usually, urban signage refers to the domain of information. A series of scenarios and use cases are envisioned and, thus, the needs, desires and wishes of different types of users are evaluated to try to understand what information is more useful, and how it can be conveniently visualized onto signs, in accessible, usable ways: “A tourist is on the street in a certain city location, searching for the next landmark to visit.” Signage is designed in order to be visible, perceivable and understandable, allowing users to visually navigate the information domains of the city (mobility, environment, tourism, services, administration, regulations etcetera).

Now, specific technologies and methodologies can be used to assess the other two, valuable, scenarios of Information Architecture: Knowledge and Wisdom.

For example, in the touristic scenario, Knowledge could be represented by patterns of information, such as “the network of best landmarks for contemporary art lovers”, or “the accessible city”, or “the city’s venues, prioritized according to how my Facebook friends rate them”.

And Wisdom could be about understanding how people having similar cultures, contexts, tastes and needs have achieved their goals (for tourism, business, entertainment, sociality) in the city, and providing this as a service.

In our navigation through cities we mostly operate through visual queries.

What we see and experience in the city – and the way we interpret it according to context, culture and personal history – defines affordances for the use of public space.

Wether we operate in a task-based mode or wether something we see/hear/smell/touch in our environment synchs with our culture or sensibility of the moment, we perceive symbols, colors, shapes, and spatial layouts which suggest what is possible/impossible, suggested or advised against, promoted or prohibited in public space.

Affordances in public space are defined at visual, cultural, administrative and political levels, allowing us to experience a very complex set of stimulations coming directly from the urban environment.

Mobile, ubiquitous, devices – such as our smartphones – radically transform our experience of space. Though these devices we constantly experience a potentially infinite number of different, augmented, layers of information which fill the environment. Wether they come under the form of a call or a text message, through a geo-located social network element, via augmented reality, via the internet of things or via other digitally active object/space/architecture present in our surroundings, spaces transform in our perception thanks to the situated availability and perceivability of these elements of digital information.

Furthermore, these layers of information can be related to complex experiences, inventing entire new usage grammars to read, experience and perform public space.

This is what we will explore in the workshop.

The possibility to integrate Ubiquitous Publishing, Urban Sensing, Social Networking, Knowledge Ecosystems with Visual Design, Urban Design, Visual Thinking – and not forgetting to assess issues such as Digital Divide and Digital Inclusion – to reinvent the ways in which data, information, knowledge and wisdom are created, disseminated and shared in public space.

We will explore the city and try to understand people’s diversity and needs, and, thus, the information domains which are more relevant to them, as well as their needs for visual navigation systems at global, local and contextual levels.

We will then explore the ways in which digital technologies and networks can be used to go one step further, making richer forms of information accessible and usable, and also making Knowledge and Wisdom accessible, participatory, engaging for citizens and other forms of city dwellers.

We will turn all these insights into a proposal for a new Information Architecture for the city of Trieste, and for its interface: a novel, innovative signage system, across visual design and Ubiquitous Publishing.

Stay tuned for a report after the workshop.