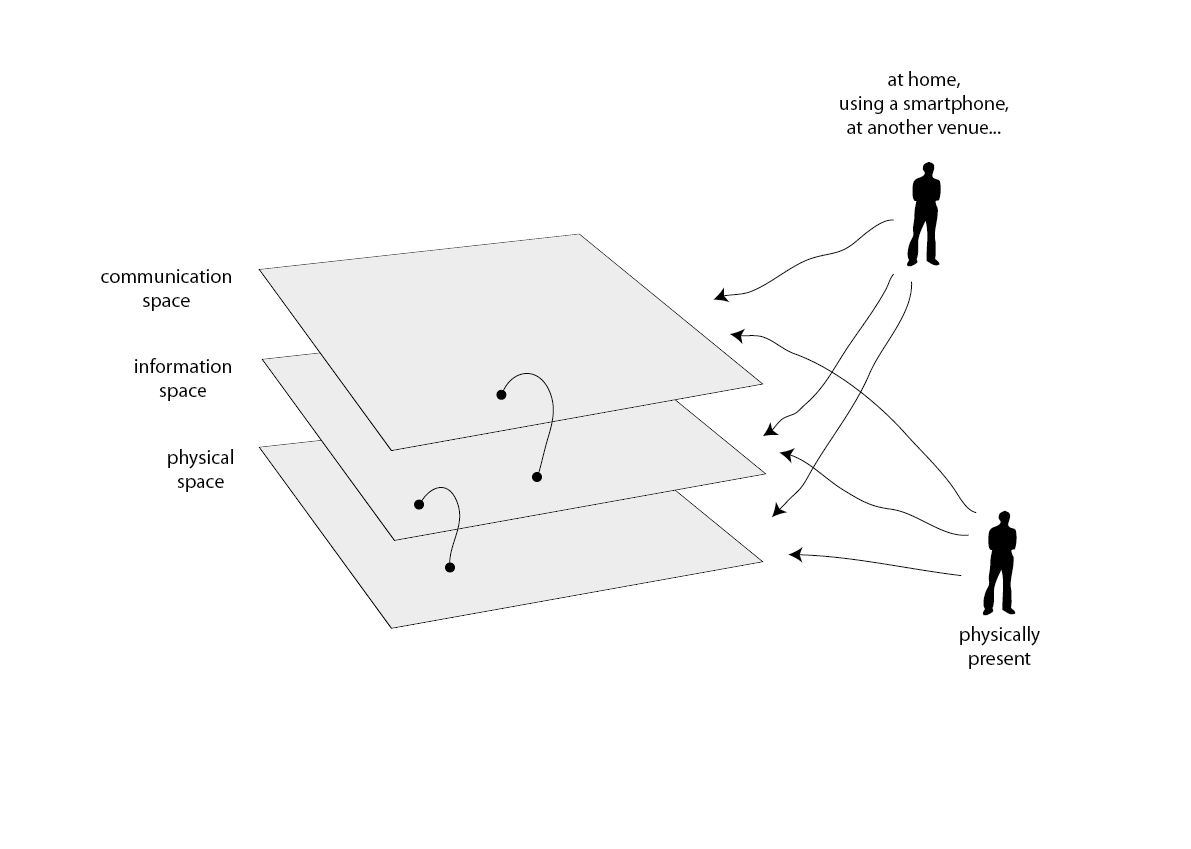 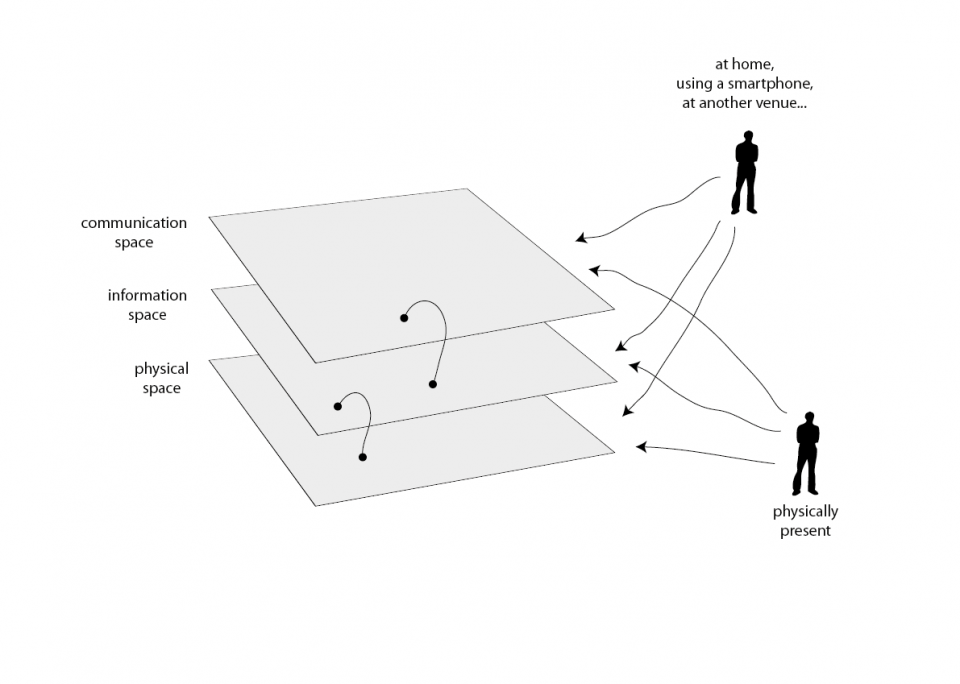 We can consider our ecosystem as an interlinked stratification of different contexts.

While designing an experience (or a series of different experiences) we can choose to focus on different layers of our living ecosystem: we can decide to focus on one, two or all of them. Wether we choose to focalize our attention on one domain or on multiple ones, we have to make sure that we traverse these domains in ways that make sense, with a purpose, creating experiences which put to good use the possibility to operate according to multiple modalities.

Here, we choose to make a distinction according to three modalities:

This is not the only way in which it is possible to classify the things which characterize our experience of the world, but we chose these ones as they will serve a specific purpose in the following activities.

While using these types of classifications it is important to remember that they are porous and fluid, and things often change their classification whenever you change the perspective according to which you look at them.

Physical space is where the body is. We can describe physical space according to what our senses [1] allow us.

Even here a note must be made: there are 5 classically recognized senses (sight, hearing, touch, smell, taste). Yet there are different additional ones which the researchers who operate on neuro-sciences have identified. One, for example, is proprioception, [2] the sense of being present, of being in a certain place; or the internal senses which allow us to perceive when we are hungry, or cold, and more.

Multiple researches have discovered the ways in which all these senses work, how they allow us to experience the world, our bodies, our presence, and the places in which we stay [3] [4] ,  and how we use them to gain insights and understanding from the world  [5] [6] [7].

In short, it is possible to say that through the physical experience of the world, as mediated through our senses and our possibility to move and to enact mechanical processes, we are able to explore and gain understanding of the environment in which we are in, as well as of ourselves and our role within the world [8] [9] .

Physical space is not the only way in which we can observe the world.

Information space is where we experience information.

In its strictest definition, information is is an ordered sequence of symbols that can be interpreted as a message.

Information can be recorded as signs, or transmitted as signals. It is any kind of event which affects the state of a dynamic system. [10]

Information is everywhere, in fact. Each thing we see, each odor we smell, each texture we touch, everything conveys information: we live in a state of continuous interpretation of the things we experience in the environment which surrounds us. And each of these things can be interpreted in multiple ways, according to our personal approach, to our cultural background, to our personal history. And, thus, each place, object, sign, sound can bear different types of information for different people, from points of view that are emotional, cultural, symbolical.

The encounter and and possibility for interaction of multiple interpretations of the world, giving rise to different information for the same elements of the environment, is of specific importance: it is where two or more interpretations meet that intersubjective, collective experiences take place, at the border, in the interstices of our spaces where cultures meet and engage each other.

Colors, shapes, layouts, patterns, can incorporate meaning which are significative for us alone or for entire communities.

In each of these interpretations, each time that “something” comes to form meaning according to a certain perspective, information is formed.

Information, with the act of being recognized, changes the state of systems, where with the term of “system” we can allude to any simple or complex dynamic process, such as a human being walking down the road, a party, a work session, or a lesson at the university.

When an individual walks down a road and arrives at a crossroad, the traffic light visually communicates bits of information, thus causing the person to mutate behavior.

When we place our hand near a flame, the heat becomes information, causing us to quickly change the direction of our hand-movement.

All our environments are fully coded with elements whose role is to convey different types of information, from signage, to lights, to the shapes of urban furniture, to our dress-codes, to the ways in which products are laid out in the aisles supermarkets, to the music we unconsciously listen to in airports.

During these last decades, the role of information has drastically changed in our societies. Information is produced in massive doses on ubiquitous technological systems in a variety of ways, involving a multiplicity of types of different subjects, from enormous multinationals and their gigantic information systems, to the small, continuous bits of digital information which we all generate nowadays while performing our daily activities, from purchasing products in stores, to using our mobile phones, to participating to social networks.

Digital information has become ubiquitous, causing our world to mutate: everything can now possibly be transformed into a screen [11], and the possibility to interconnect people, objects, architectures and places to each other using digital devices and networks has brought the concept of “hyperlinking” from computer monitors into our cities and into our daily lives [12].

We can, thus, augment our design processes to include digital information as an ubiquitous building material.

This, of course, has always taken place: if, for example, we focus on the concept of affordance – the concept which describes how form conveys information about the possible, suggested usages of objects, places and processes – we will see how even the most physical forms of design are deeply aware about information.

In ways which are becoming completely similar to the ones we use while designing the visual meaning of objects, signs, buildings, clothes or rooms, we can now design the ways in which digital information is linked and accessible from those same elements.

In designing for the information ecosystem, we must confront with three fundamental issues:

Information Architecture allows us to express a model or concept of information used in activities that require explicit details of complex systems. [13] [14]

Through Information Architecture we interpret information and make distinctions between signs and systems of signs.

This requires the classification of information into a coherent structure, preferably one that the intended audience can understand quickly, if not inherently, and then easily retrieve the information for which they are searching. [15]

Information Representation requires us to conceive the metaphors through which it is possible to communicate information. This activity finds its origins in the ways in which information is represented in different cultures, and requires the understanding of the targets of the information, the cultural backgrounds and the goals to which we wish to make information accessible, understandable and significant.

Multiple techniques and approaches are possible for this activity, and they all require to gain understanding of the mental models of the targets of information, as originated from culture, history, interests and personal approaches [16] [17] [18] .

Information Visualization proceeds from there, designing the ways in which information is visualized and experienced, taking into account aesthetics, accessibility, usability, complexity, and the multiple ways and purposes according to which information can be used, including the optimization of its visualization according to the device or other fruition technology through which information is experienced (from small devices, to smartphones, computers, urban screens or media facades which occupy entire architectural spaces), and its narratives, purposes, aesthetics and symbologies [19-26].

Communication and Interaction Space is the place in which all the action takes place.

We can describe any part of the world that surrounds us as a space for communication and interaction. We communicate through the ways we speak, dress, look, touch, and event through the things which we avoid doing, saying, wearing and touching. Our gestures, expressions, body positions communicate.

Communication is the activity of conveying information.

Communication can be seen as processes of information transmission governed by three levels of semiotic rules:

A constructivist interpretation of this process exposes how the parties involved in communication are actually interrelated, and the ways in which they express information, thus performing the act of communicating, is to be considered as transformative of the way in which the information will be received and understood.

All these elements should be taken in consideration  when designing communication experiences:

The definition of Interaction is closely related to the ones described above, and it involves  interconnection, information, communication.

In fact, Interaction is a concept which is more general than the one to which we think about when we analyze “interactive systems” like websites, videogames, mobile applications. The concept of Interaction exists in multiple domains, like physics, chemistry, social sciences, and more.

Interaction is a kind of action that occurs as two or more objects have an effect upon one another. The idea of a two-way effect is essential in the concept of interaction, as opposed to a one-way causal effect.

As a general rule, it is possible to define the term “interaction” in more than one way, according to scopes, areas of interest, disciplines and sciences. Yet the main idea comes out from all of them: two elements (individuals, devices, games, chemical compounds, software components…) exchange some sort of signal/stimulation (a click of a mouse, an electron, a bit of data, a signal…) and, thus, interrelate for a defined amount of time, altering their condition in some way, possibly producing some perceivable effect (information, change in interface, different molecule forms, a device activates, something appears on a screen, a sound….).

It is clear how Interaction is, in this definition, a form of communication.

And just in the way in which our spaces/processes – physical, digital, hybrid, localized or ubiquitous that they be – are filled with multiple flows of communication which, according to our perception, describe “what is going on” in that space/process, the same can be said about interaction.

Interaction Design is “the practice of designing interactive digital products, environments, systems, and services”, and it has a specific focus on the understanding of behavior (of people, things, processes) and on the satisfaction of the desires, expectations and conditions for well-being of the people using the products, environments, systems and services which are the object of design.

He defines Interaction Design as a question a series of “How to..” questions:

This definition has been rightfully considered a foundation for the disciplines which relate to Interaction, but we can imagine how to expand it by taking into account the contemporary transformation of human beings and of the ways in which we interact with others and with systems. This article [link], for example, starts from Verplank’s drawings to include the ways in which our knowledge has become more social, the novel ways in which we desire to share our emotions and expressions with other people, the innovative ways in which we can and desire to know the effects of our actions across time and space, and the fact according to which our interactions are not isolated in space/time, but form an ecosystem in which knowledge, information and human interrelation play crucial roles.

So we go from this:

In THIS ARTICLE [link] some other fundamental theories are investigated, to describe the design of experiences in a bit of more detail.

The incipit is obtained by observing this image by Nathan Shedroff:

All the issues analyzed in this lesson form a basis according to which we will analyze Interactions and Interaction Ecosystems in the next lesson.

[3] Knoblich, G. (2006). Human body perception from the inside out. Oxford University Press.

[29] Forlizzi, 2004, Towards a Framework of Interaction and Experience as It Relates to the Design of Products and Systems. Retrieved October 2004, from http://goodgestreet.com/experience/home.html