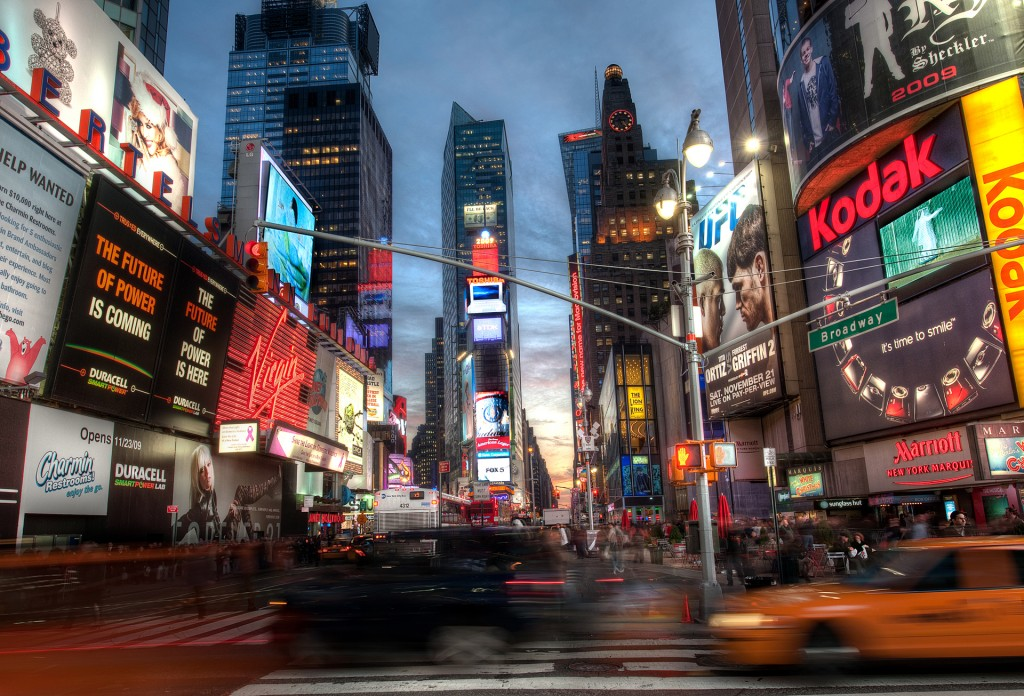 AOS (Salvatore Iaconesi and Oriana Persico) have started to teach at the Master of Exhibit Design at La Sapienza University of Rome.

Our contribution will engage the possibility of designing large-scale events using methodologies which allow to create seamless experiences which join together physical and digital environments to achieve multiple objectives. 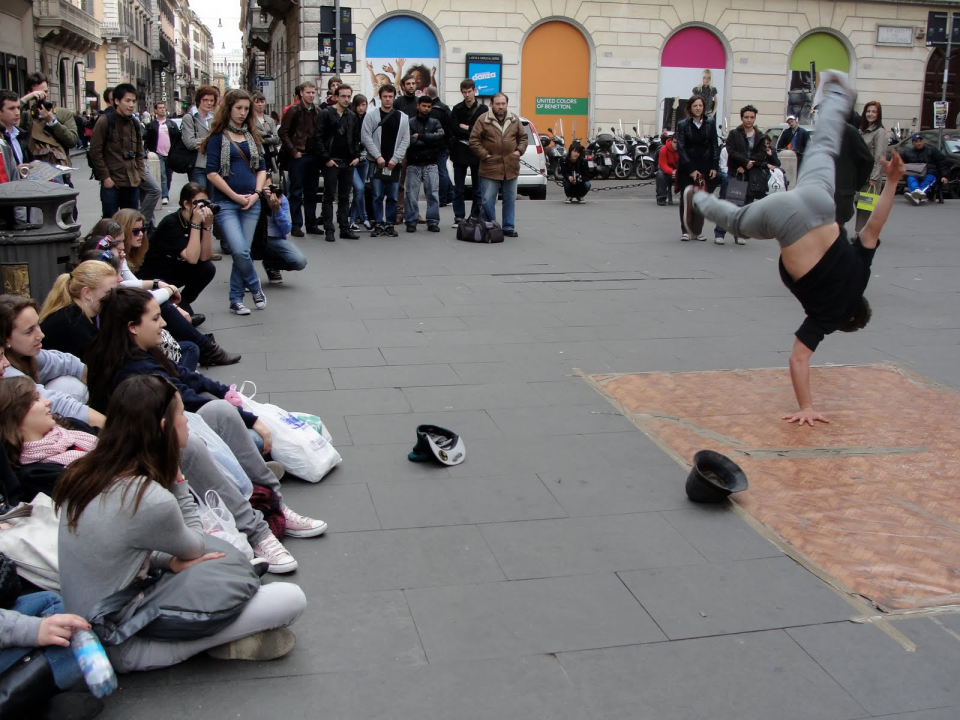 breakdancing in the street

In the first introductory lesson, we started by analyzing the image above. It shows people watching a breakdancing show in via del Corso in Rome.

What we did was to imagine what was going on beyond the appearances. If we look at it from a specific perspective, all the people in the picture are busy generating ubiquitous digital information. Each of them probably has a mobile phone in their pocket. Some of them are taking pictures, which will possibly end up on social networks and probably be even geo-tagged to associate to them the information about where the shots were taken. Maybe some of them will publish something like “great breakin’ street show in Rome today!” on Twitter. Each of them probably has some sort of digital means of payment, such as ATM or credit card.

From such observations, we figured how multiple layers of activity are simultaneously going on in a single space, and we could imagine representing them visually or in some other form, for example using Augmented Reality, to have the perception of something which goes beyond our “natural” vision of the world we live in, beyond the landscape.

What we envisioned is that it is now possible to transform each physical space into an augmente space, in which ubiquitous technologies can be used to stratify digital information and interactive experiences onto the ordinary reality.

This produces an entire new vision for our cities and, more in general, for our physical spaces, which now are able to embed digital information creating novel scenarios for the activities  of our daily lives.

We interpreted this as a generalization of the term Screen. 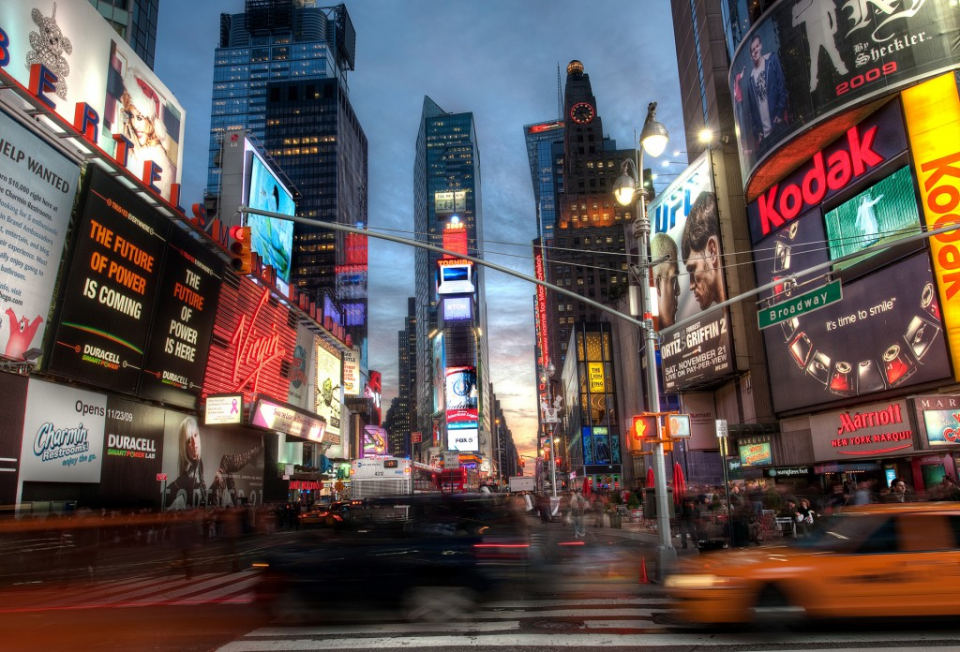 We are used to seeing screens everywhere in one way or the other.

Each advertisement, each led display, each timetable at the train station, each menu outside a restaurant, each weather and temperature display, each microwave oven. Multiple things in our environment show information in ways which we would have no problem in defining as “screens”: surfaces of some kind showing information and/or narratives.

Some places are more explicit in being filled with screens, such as Times Square (NY), shown in the image above.

Yet it non difficult to imagine how it is possible to transform virtually any surface into a screen designed to show information and offer opportunities for interactivity.

Through Ubiquitous technologies, mobile devices, augmented reality, location based systems, near field computing, sensors, electronics, wearable devices, electronic gadgets, smartphones and multiple types of display technologies, each space, each surface and even thin air can become a screen, radically augmenting the physical environment by layering onto (and interweaving into) it multiple digital experiences.

We noted how this approach radically changes the definition of public space.

In its classical definition, public space is somewhat a description of borders, of boundaries, which we, public administrations, cultures, common practices, symbols and temporary agreements define as such.

In this new scenario, public space becomes a simultaneous compresence of multiple definitions. By adding an Augmented Reality layer to a space I can transform it into a public space for discussion, for example. In that same space I can add other opportunities for public, shared interaction, which may or may not be related to one another. Furthermore, people from diverse locations can converge into a single digital public space and, thus, into a physical space, as the information and narratives which they generate materialize in a single location regardless of where or when they have been generated.

This approach transforms space/time into a read/write framework for multiple simultaneous forms of expression.

Such possibilities drastically interact with our notion and perception of place.

In his book “The Image of the City” Kevin Lynch describes the ways in which we recognize places, the elements which we use in our perception of place to identify it: aesthetics, materials, lights, configurations of buildings and streets, signage, people’s walking patterns… In the consideration of an augmented place (Digiplace,as Zook & Graham describe it) we experience a different geography: emergent; ubiquitous; multiple; open-ended; capable of hosting at the same time multiple perspectives, layers of information, narratives.

This issue calls for new methodologies in designing space and the processes which take place in it, across time, geography and ubiquitous digital presence and interaction.

The need to positively design this new idea of space, which fluidly mixes physical and digital domains, requires modifications to our practices.

This is exactly our approach in our contribution to the Master of Exhibit Design:

During the lessons we will focus on the following approach: 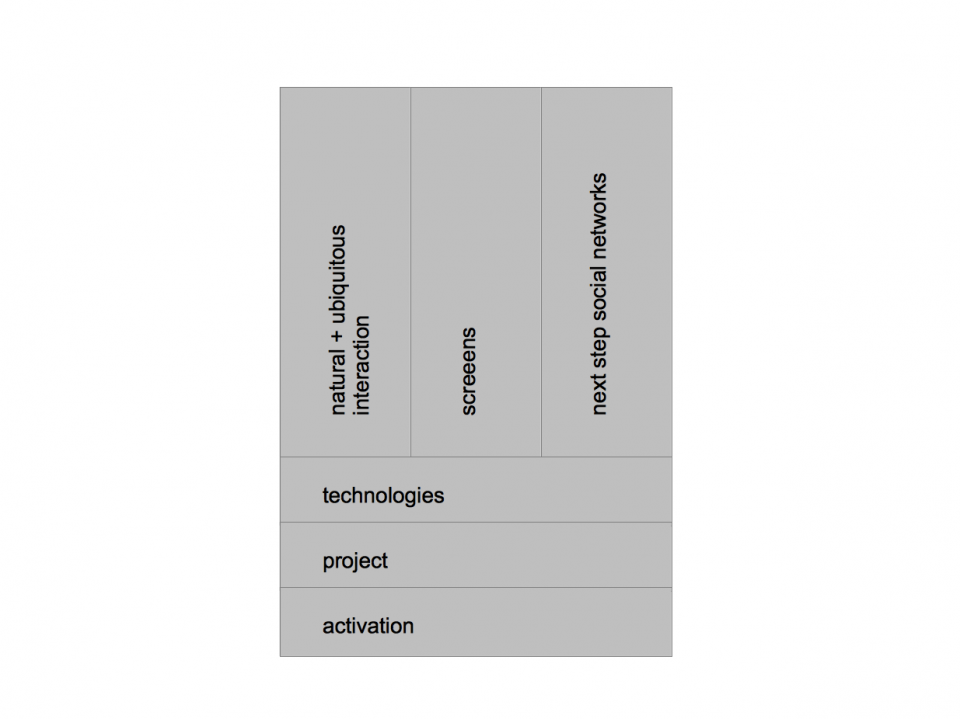 There will be a horizontal and a vertical classification of the themes discussed in the lessons:

We will do all of this starting from the idea of the Great Event.

A Great Event, such as the Olympics, major conventions, city-wide happenings, film festivals and things like that, are peculiar in the fact that they create important processes in the city for the length of their duration.

A city is a specific type of place, as in its territory multiple processes, of large, medium and small scales, constantly interweave, engaging society, administrations, companies, groups of citizens, and addressing major issues such as health, security, mobility, environment and pollution, energy, law, regulations, cultures, commerce.

The creation of a major event in a city requires multiple types of action, and the design of the event itself is only one of them, the others being the search for a suitable location; the establishment of relationships with local administrators, companies, citizen representatives; the request for licenses and permissions; the assessment of issues related to health and security; the dialogue with organizers, sponsors and territorial subjects. This type of overall activity describes a Great Event as an ecosystem of practices with great impact on the urban texture of the place it is organized in, from points of view which are economic, commercial, social, cultural, communicational, and requiring different types of interventions on both the territorial configuration and on the administrative, bureaucratic and civic apparatuses of the city.

In the following lessons of the course we will focus on the ways in which a Great Event can be designed to incorporate the technologies and methodologies described above into the definition of a city-wide process which is able not only to realize an harmonious and effective interrelation between physical and digital spaces, but also to promote novel practices which are able to interconnect people worldwide, across cultures, languages and approaches.

The Great Event which we will describe will take place in a physical location, but it will also interconnect in real-time people from all over the planet. In the physical space natural interactions, ubiquitous screens and networked processes will allow people to produce and experience real-time information and to relate, learn, and participate in novel ways, suggesting new scenarios for entertainment, citizenship, commerce, knowledge, culture and awareness.

Here below you can find the slides used in the first, introductory lesson.

Here Below are some of the videos used during the lesson: