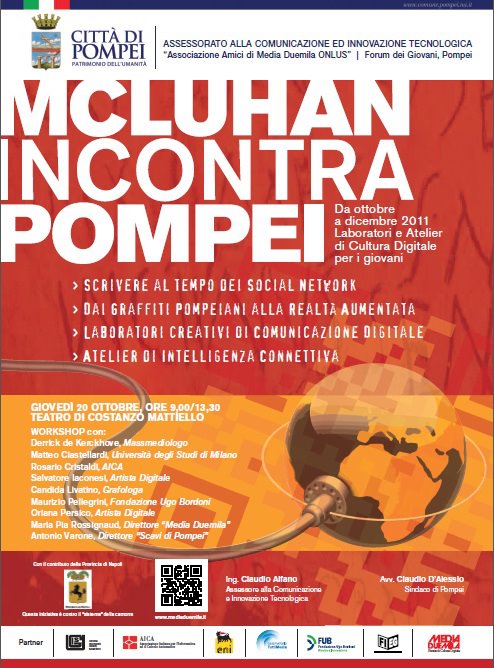 McLuhan meets Pompei. On October 20th 2011 we will be in Pompei for an event in which we will engage the new forms of writing enabled by ubiquitous technologies and augmented reality.

Organized by MediaDuemila as an event for the centennial celebrations of the birth of Marshall McLuhan, the event will feature the official launch of a project dedicated to knowledge, education and scientific experimentation dedicated to the students and young generations of the city of Pompei: “McLuhan meets Pompei: writing in the times of Social Networks. From graffiti to Augmented Reality”.

Derrick de Kerckhove, MediaDuemila’s scientific director, will lead the project which will have its official start

and will present the fundamental contributions by:

The project will continue in December with a Connective Intelligence Atelier and with the creative laboratories for digital communication titled “The Electronic Man and the Digital Wall”, promoting the acquisition of knowledge and skills on ubiquitous technologies and media, and the reflection on global society, characterized by the continuous interconnection of human beings, cultures, nationalities and languages, just as forecasted by McLuhan.

Here on MediaDuemila you can find a short text that describes our intervention in the event and in the project.

Here are some extracts, translated in english:

“Ubiquitous technologies materialize new and fascinating forms of writing as well as new forms of sensibility and planetary awareness, in a scenario which sees our perception of the world radically mutated.

The impacts of this mutation have effects on the ways we work, learn, communicate, relate and spend our free time. Digital networks and technologies are at the base of this mutation and determine a drastic change in out models for thought and expression.

In ‘The Electronic Man’ a suggestive and effective narration shows these new spaces for possibility and opportunity, and makes them observable.
A global performance forms the foundation of a research project which has been able to enact a new form of planetary writing and sensibility.
Thousands of QRCodes have been disseminated by internet users in their cities, and are forming the access portal to participating to this global experiment: the creation of a connective body and identity, and the acquisition of an externalized, added sensoriality, through a technological device.

As of today, around 50 thousand people all over the world participated to the performance/experiment, creating a scenario which bears very high interest for scientific and cultural research, due to the material possibility to observe and experience these novel possibilities: accessible ubiquitous technologies, relating people across multiple cultures and social contexts, on a planetary scale; augmented reality, ubiquitous publishing, natural interfaces and geo-referenced systems which are able to create and enable usage of new forms of writing, new sensibilities and tools for awareness and communication.

In Pompei the technologies used for the Electronic Man project will be explained and given to students and teachers. Together with them we will create a performative workshop in which these methodologies and techniques will be used in practical scenarios, inventing new forms of citizenship and processes which are able to narrate the story of the territory, people’s identities, the value of the production and the richness of the culture of the land and of the people who inhabit it.

Appropriating these languages, creating usage grammars for them, freely activating them in our daily lives: these are becoming the conditions and toolsets of the global citizen and of a new form of citizenship which is truly capable of transforming human beings into active agents of our societies, more aware, tolerant and conscious of the value of its territory and of fellow human beings.”