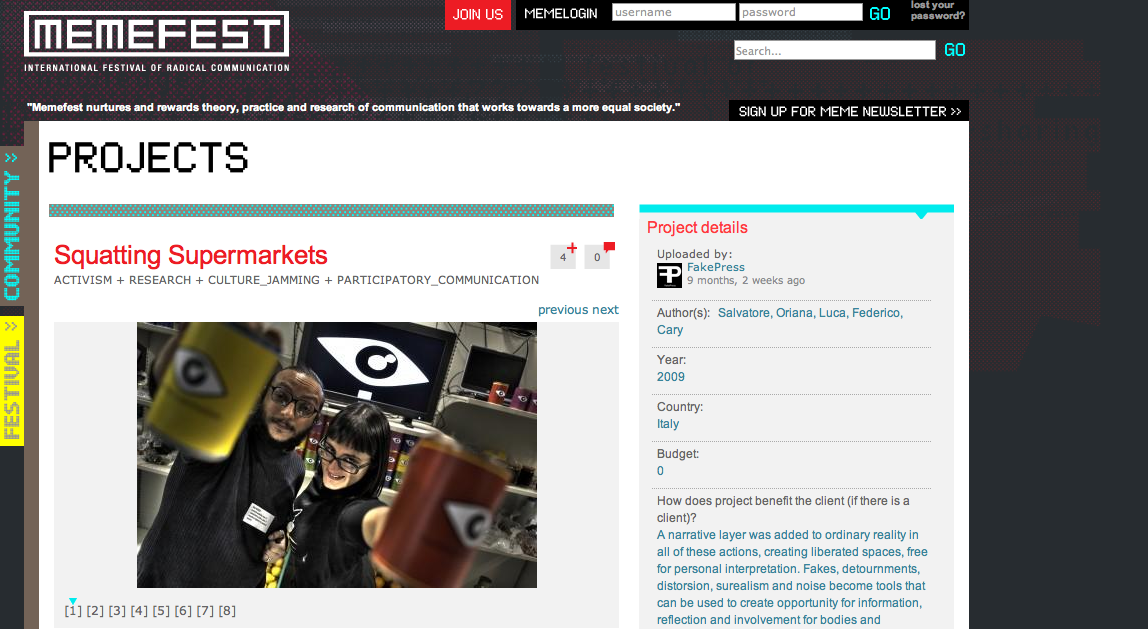 An update from a little while ago: Squatting Supermarkets and REFF have been featured at the Memefest. 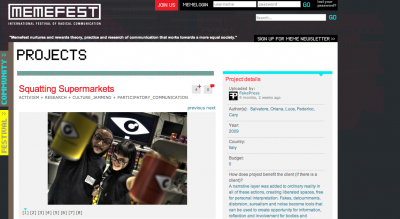 REFF and Squatting Supermarkets at Memefest

Memefest is a international network of good people interested in social change trough sophisticated and radical use of media and communication. We create, think, research, educate and work on the intersections of art/science/communication profession/activism/theory and practice.

As a platform Memefest has two main dimensions. It is a festival and a collaborative community.

In this scheme we proposed our projects Squatting Supermarkets and REFF, RomaEuropa FakeFactory.

Squatting Supermarkets as described on Memefest:

“Buying, wearing, eating, using. Our lives are full of objects of which we know very little about.

Shop’s and supermarket’s shelves only tell partial stories made from companies, efficient productions, happy farmworkers laying down coffee boxes on trucks with the logo of Nestlè, solar panels amidst fields and atop the roofs of factories who seem to have really stopped vomiting their foul toxic wastes in rivers and air, replacing them with new by-products of production that smell like straw and wheat.

All this happens if we look in one direction. And if we look in the other we see the aisles of the supermarkets spreading messages telling the tale of happy families (politically correct ones: a man, a woman, possibly mixing races and continents, with children, with the only possible alternative to be found in the images of career boys&girls, replacing family with business and fitness) buying things using credit cards, placing sincere trust in the ear of wheat almost protruding from the box of the product X that they throw into their shopping cart. Just as they trust the words biological, sustainable, ecologic showing up in products of all kinds.

Great commercial distribution points take narratives to an architectural level, designing our experiences up to the deepest levels of detail: the sequence of racks, shelves, themes, suggestions, colors, turns, tight spots; the reassuring sound announcing incredibly special offers; social, ecologic and economic themes, by which all bread is that of the old times, every shampoo has low ecologic impact, every automobile reduces polluting emissions, and any pack of coffee is produced by locals living on cheerful mountains upon which everyone peacefully smiles.

Visions that are partial, designed, mono-directional. Not all of the time. We must say that: luckily we can choose among many producers that have made the transition towards sustainability, ecology and the respect of diversities and of fragile populations. What we need to state is that for everything concerning these issues the possibility to access knowledge and information is an element of primary importance.

Art and creativity often confronted these points of view. The Supermarché Ferraille comes to mind with their improvised store displays, their surreal advertisements, their distorted products. Or the AdBusters, their subversive and detourned communication campaigns. Or the performances by Banksy, National Cynical Network.Or, in Italy, the ones by Candida TV, Serpica Naro, Anna Adamolo, Luther Blissett, Liens Invisibles. (… and loads of others. So much that it would be truly interesting to list and map all f the actions of this kind)

Squatting Supermarkets combines several platforms: iSee, an iPhone application used to create information and communication systems localized on logos and symbols; Ubiquitous Publishing, a set of open technologies that can be used to create location and architecture based contents, accessible directly from the places tht we walk through by using mobile phones and devices, together with simple, affordable augmented reality techniques; architettura rel:attiva, DpSdC and OneAvatar, a series of technological platforms that connect bodies and architectures to the internet and to virtual worlds.

Cold and words, in front and behind. Requests for information, calls to other aisles, requests for consensus, children getting lost.

A small accident takes place behind me, just as I lift a package taken randomly among others: two shopping carts collide, pouring out cardboard boxes, synthetic fibers holding together oranges that look all the same, bottles labeled in geometrically psichoactive ways. The fast bureaucracy of the accident ends and everything orderly starts back up : people start following their directional vectors, dictated bi habit and special offers.
I grab the pack back up, simultaneously extracting a smartphone from my pocket: a rapid automatic swipe of my thumb on the touchscreen unblocks it.

Colored icons in one hand, a cold, wobbly package in the other. I run through the icons, finding one with an eye insistently staring back at me, white on black. I activate the application and immediatly frame the package in the viewfinder: red, white, blu contour, thick typeface, readable. A short wait: “Product recognized: XYZ”. Options on the screen “Available information: ecological footprint, social responsibility and sustainability, alternative products. Or you can access the public discussion”.

On one side, to systematyze practices and technologies, creating an open framework that can be used and evolved to instantiate augmented reality (or, berret, Virtual NeoRealist) spaces, connecting bodies and information, implementing accessible, relational and natural interaction schemes.

On the other side, to act, starting multi-author, diffused, emergent narratives.”

REFF as described on Memefest:

“Romaeuropa FakeFactory is an act of artistic and technological hacking, a platform for global discussion and a performance that, beginning in 2009, has dealt with the themes of active, critical and creative innovation, confronting the management of cultural and technological policies related to these areas. The story begins with the opening of the Romaeuropa WebFactory, a digital art competition launched in 2008 by the Romaeuropa Foundation (Fondazione Romaeuropa) and Telecom Italia. Oppressive copyright conditions, such as the unilateral transfer of the rights to the works submitted and a ban on the use of techniques like mashup, cutup, remix but conversely giving the Romaeuropa Foundation and Telecom Italia the right to remix the works, inspired the creation of a Fake capable of becoming a point for multi-disciplinary analysis of the possibilities offered by freely available knowledge, contents and resources: a chance to reverse the logic of the competition and bring to light the contradictions, limits and implications of such a typical, reactionary cultural policy.

“Remix the world! Reinvent Reality!” is one of the principal themes that has inspired the REFF, from an act of détournement and cybersquatting – that brought to life the creation of a remix skills competition determining in 2009 a reversal of the Romaeuropa Foundation and Telecom Italia’s policy on the management of intellectual property rights – to the presentation of REFF’s instances and methodologies to the Cultural Commission of the Italian Senate (Commissione Cultura del Senato della Repubblica Italiana), up to the current production of the REFF book, as a global effort to create a working business model that implements the concepts and demands expressed by the RomaEuropa FakeFactory. Supporters of the REFF are found all over the world: over 80 partners among universities, artists, academies, associations, hackers, researchers, designers, journalists, politicians, magazines, networks, activitst, art critics, architects, musicians and entrepreneurs together with all the people who share a belief that art, design and new technologies can unite towards a critical, yet positive vision of a world that can create new opportunities and new ways of being, collaborating and communicating.”

The projects will be featured in a publication produced by Memefest in the next part of the year.