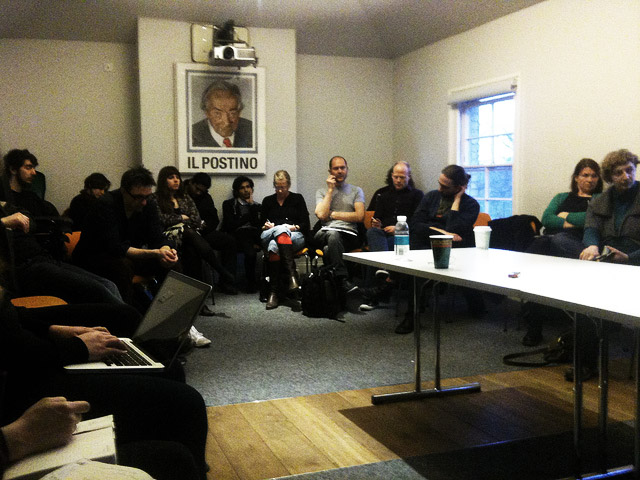 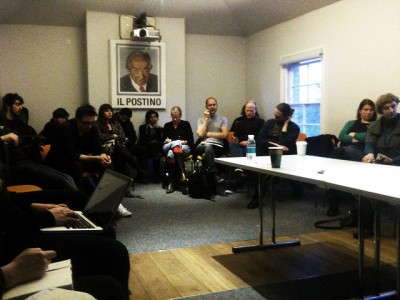 REFF at Queen Mary for Self Org, workshop

Collecting all the documentation from our recent visit to London, here are some considerations on our presentation at Queen Mary University for the self-org series of meetings.

The meeting was specifically focused on the interesting intervention by David Vercauteren (Micropolitiques.net, Brussels) explaining the history and dynamics of their initiatives with le collectif Sans Ticket, promoting free public transportation in Busselles by creating a fake ticket and travel card through which people were invited in bringing up dialogues with the operators on board of buses, bringing the discussion on personal levels, explaining how and why they wanted to travel for free, since they were students, unemployed and with no money or with precarious jobs. The initiative was really successful, and it also featured an interesting invasion of the institutional sphere, as the members of the collective have in some way been recognized as experts in public transportation policies and invited at conferences and meetings.

The discussion on the dynamics of a group like the Collectif Sans Tickets was really interesting, and the issues that touched me the most were the ideas of the possibility to evaluate the energy of the group, in understanding if actions were possible or even feasable, and on the ideas about  how it is at all possible to understand the (natural) roles of people in a group to not only get things done, but also to ensure satisfaction and, most of all, a feeling of live cohesion, thus enabling next steps.

When it was our turn in presenting REFF, RomaEuropa FakeFactory, we were in a bit of a philosophical dilemma: our actions are not a lot about organizing people into groups, but more about creating examples, tools, and methodologies (and also stamina and inertia) that would make it easier for people to organize themselves.

Our objective with REFF, our fake cultural institution, has never been to create a community, or even a group. We have always been focused on the performative side of it, and on the possibility to create emergent synergies that passed through art, sciences, technology, activism, business and hacking so that the result was not “a group”, but knowledge, imaginaries, visions, possibilities and empowerment.

This is exactly the reason why we choose to operate under the metaphor of the fake cultural institution. Because this is actually the exact thing that a ‘real’ institution could be: an infrastructure; a set of tools; a meta-brand that anyone moving along the strategies of the institution should be able to use to their advantage, possibly bringing in more knowledge, empowerment, examples and imaginaries.

This is what we try to do with REFF and, for example, with its education program and the technologies we are producing.

We speak a lot about augmented reality: this is what we mean when we say it. Being free and autonomous in the possibility to write onto the world, creating additional layers of accessible, open, free information, expression, imaginaries, poetics, politics, aesthetics, knowledge, visions. And to create multiple ecosystems in which this happens, establishing a dynamic of exchange and mutual involvement, disseminating information, knowledge and practices ubiquitously using performative actions and pervasive technologies.

The discussion was really interesting and lively, and we thank everyone that was there for it: we look forward to engaging this kind of dialogue with you all! It’s really important and insightful.

and Thanks to  Arianna Bove and Erik Empson  at Generation Online for creating this wonderful occasion for discussion.