REFF in London with Furtherfield

on Feb. 22th 2011 REFF (with AOS, Art is Open Source, and FakePress) held a workshop in London at Westminster College
The theme of the workshop was the reinvention of reality through critical practices and ubiquitous technologies.
During the workshop a short history of the REFF project was narrtes, quickly followed by a hands-on session in which the cross-media publishing tools released by FakePress under a GPL3 license have been installed and tested out:

MACME: a cross media publishing plugin for the WordPress platform allowing to transform any blog into an ubiquitous tool for publishing creating PDFs, ePub ebooks, QRCodes, location based media and augmented reality content.

KNOWNERS: a knowledge sharing ecosystem built on the wordpress platform

CoS, CONSCIOUSNESS OF STREAMS: a ubiquitous narrative first shown at the transmediale festival on 2011, through which FakePress created a global publication in which more than 35000 authors have created a realtime emotional map of the world 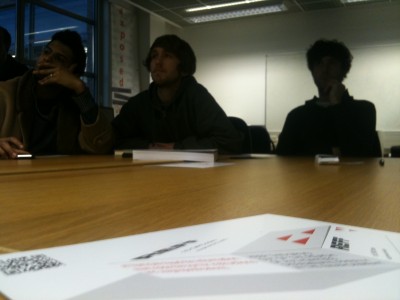 more info on REFF and the specific projects on:

the global vision of REFF project can be seen here: