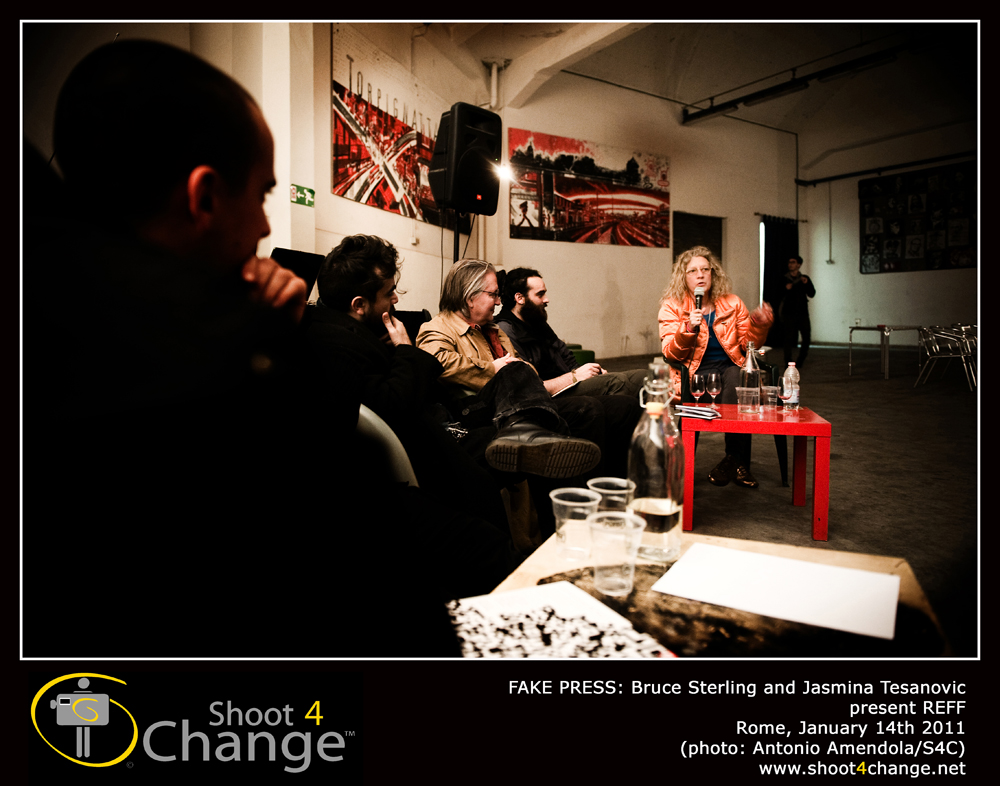 We just recovered from the intense two days promoting the REFF project in Rome with the lovely help of our friends Bruce Sterling and Jasmina Tešanović, and we’re ready to tell you all how it all turned out. 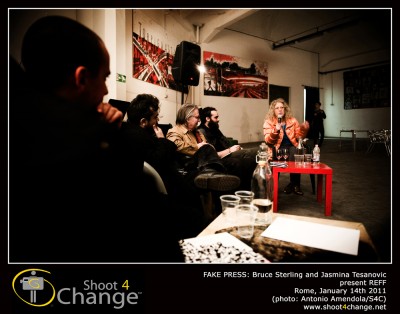 In this message and at this link you will find some of the wonderful pictures taken by our dear friends at Shoot4Change. You can also read here their impressions about the first of the two days of the event.

And here are some of out thoughts on what will be going on at REFF.

The two days of the presentations took place in two really characterized spaces: the Atelier ESC Autogestito and the Strike, with all the occupants of these two political squats and with our friend Andrea Natella helping us out with the interviews, and with our dear friend and companion Massimo Canevacci, connecting all the way from Brasil to join us in the discussion on the opportunities given by the possibilities to use tecnologies, fakes, remixes, mash-ups of the world. 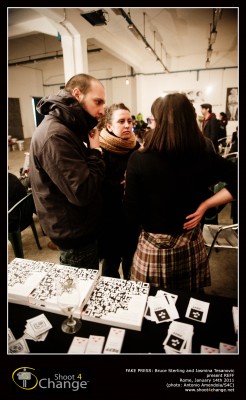 the book on sale, photo by Shoot4Change

During the presentations we actually spoke very little about the book and we, instead, moved our focus a lot across several subjects, including student movements, technological opportunities for freedoms and autonomy, feminism and the impact that technologies had on gender movements.

And there’s really nothing strange about it: we were in two political squats, together with the inventor of cyberpunk and one of the most interesting activist in the world, moving across feminism, networks, media and identity. And it was a really nice and insightful experience.

What I really wanted to point out is that there is a definite, perceivable, tension.

This is a time of rapid transformation.

As Bruce Sterling said many times during the discussions: we are living among things that we didn’t have words for even just a few years ago, using technologies that become totally obsolete in 1 year, with political scenarios that totally transform in 1 year, with media formats that become unreadable in about 4 years, with strategies, literatures, formats, perspectives, leaders, objectives and imaginaries that last about 1 year, at most. With attention spans that last about 2 minutes, and way less than that if there isn’t at least a nice picture to pull our focus across the 2 seconds barrier which is about how much time we look at things before we decide if they interest us or not. 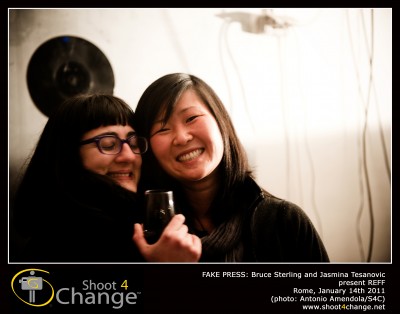 In this condition, precariety, nomadism, instability, indetermination, randomness and mutating identities are normal. They are our way of life. And we do have to find ways to make this kind of weird normality sustainable, enjoyable, livable, significant and, most of all, to guarantee ourselves with acceptable degrees of freedom of expression, with economic sustainability, with the possibility to determine our own vision on the future and with some power to try and enact it. 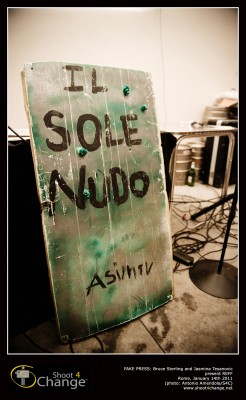 In this search for opportunity and imaginaries for the future, technologies play a very important role.

First of all because technologies are neutral and their “meanings” are completely defined by the ways in which people use them. So envisioning a use of a technology, or even simply making a thing up, inventing a scenario, creating a fake, a mash-up of technologies, is an action that assumes an enormous value. Because it creates a vision and, thus, a possibility that the envisioned scenario could come to life.

In a world that is completely encoded, vision assumes a major strategical role. Because the encoding of spaces, practices (ad uses of technologies) is an expression of authority. And the possibility (even only described by a fake, or by an imaginary scenario) to reinvent the possible uses of a technology creates a new space: unexpected, unruled, and empowered with the possibility to self-determine it. Vision creates interstices in the encoding of the world described by power and authority.

If a vision includes the sharing of the knowledge and skills to use the technologies that might be used to enact it, vision becomes a powerful tool. A tool that can be used to “Remix the world” and to “Reinvent Reality”. And, most of all, to enable people to try and remix and reinvent things their own way. To create their own Augmented Reality.

And so, in the end, i was really happy about these two days. And I was particularly happy about one thing :) During the first part of his intervention at Strike, Bruce Sterling said a couple of things that really struck me as being an evident, but little talked about, truths.

One of them had to do with a thing he called “Italian Augmented Reality” as it being obviously different from the regular one :)

I thought it was a brilliant observation, and I really enjoyed thinking over it and its implications. Basically, the main line behind that expression is: only in Italy someone could come up with the weird idea of trying to use Augmented Reality to support movements and, in general, to support people’s self-determination and freedom of expression. And it is completely true: Italy’s history of political movements, of autonomy, of squats, of raves and of countercultures is unique, and it constantly created situations like these, allowing activists in Italy to create entire movements based on cyberpunk, hacking, digital cultures, giving them meanings that are completely different that those found in most other countries.

And, summing things up, these two days have been wonderful and insightful. And now it’s back to our little, old, daily reinvention of reality….