New scenarios for education and action: back from Milan 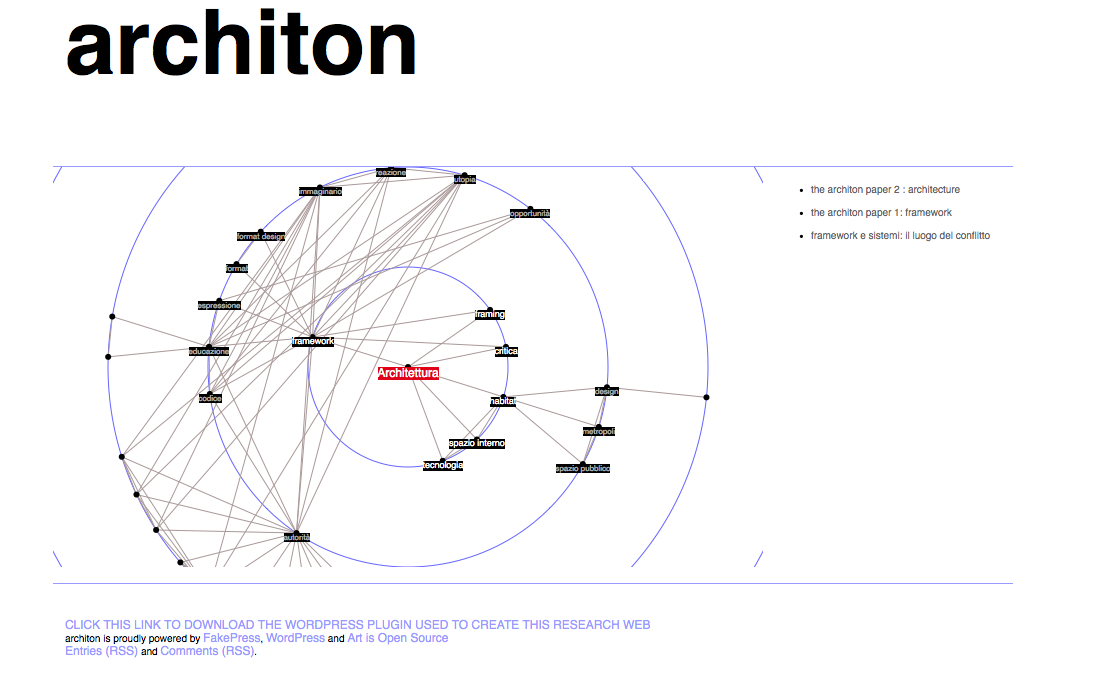 Just back from the Always Already New conference in Milan. (here the abstracts of the contributions to the conference)

The conference subtitle “Thinking Media, Subversing Feeling, Scaffolding Knowledge: Art and Education in the Praxis of Transformation” was pretty close to what took place there at the Mediateca S. Teresa, in which many artists, researchers, hackers and practitioners of arts and sciences gathered discussing and sharing their projects and visions with the rest of the guests.

The interesting topics were multiple, and I found one as specifically insightful: a possibilistic view on the models for education.

Together with Stefano Bonifazi we presented a project titled “Utopian Architectures and the dictatorship of the imaginary“, emerging from a discussion which arose on the AHA mailing list.(you can find the paper here )

The discussion started while analyzing the results of an architecture competition and noting how monumental, futuristic visions of architecture were the ones pushed as the drivers for innovation, to shape imaginaries and to create opportunity.

This discussion (obviously taking into account the endless discourses on utopias) ended up into really interesting domains, in which software and architecture mixed seamlessly. Language was pushed to some extremes, but similarities emerged among software and physical architectures, as definers of the spaces in which people’s lives take place.

Encoding the world’s spaces and times, in both their physical, cognitive and imaginary dimensions, is a powerful act of authority, and it is exactly the process which is at the base of Power’s most advanced strategies. Utopias are extensively used in this process, as well as a trend that sees the complete commodification of all domains of our lives, be them public or private, and of the practices of education, communication and knowledge sharing and diffusion.

There is a war. And it is a war on/of codes.

The idea of a meta-approach to this war of codes emerged in the discussion: if the scenario of this war is “the framework” (be it software or architecture, defining our world in bits and meters) this is where we will fight it.

We decided to build our contribution to the conference on the idea of a framework that would allow the composition of multi-voice, recombinant research paths.

The idea was to create a parallel, a layered view, a model for vision that could host multiple perspectives and re-encodings of reality: as authority wishes to encode, we wish to let multiple encodings co-exist and self-determinate.

We began with software.

What emerged was a model. A networked model.

We gave a first, simple implementation of this model. You can find it here. 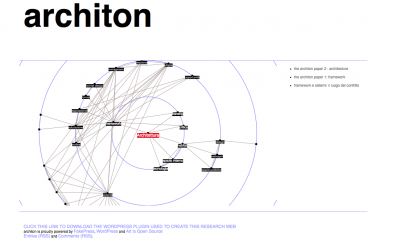 This first model implies the possibility for multiple subjects to participate to a networked discussion.

The discussion is produced by multiple interventions (ideally short, pill-like interventions on specific items of knowledge, but can be of any length/extent) including their text and multimedia documentation, and characterized in terms of subjects and areas assessed using simple, commonly known tagging/category mechanisms, defining taxonomies and folksonomies.

The system continuously observes the emerging taxonomies and folksonomies and generates interactive visualizations that can be used to non-linearly navigate through the dynamically generating networked-knowledge base: different perspectives on the world emerge by navigating along different paths on the graph, and contributions instantly alter the emerging graph, to include their points of view.

What comes out is an architecture that enacts the networked view on society, politics, relationships and knowledge which we have learned to understand while studying Foucault, Deleuze, Bateson, and making them accessible and transparent.

And, most of all, usable and simply researchable.

So: everyone is invited to join in the discussion on architon and, most important of all, to use, modify and imagine uses for the model described by it, by downloading the software, installing it and using it for their education and knowledge sharing practices.

Here are the next steps in the development of the framework:

You are all invited to joining in the discussion/development.

We are constantly using the platform under many instances for research, work and education with our students, already testing out some modules that enact many of these new development paths. If you’d like to join in or to know more about the evolution of the project feel free to contact Art is Open Source and FakePress.

Technical note: the software uses this wonderful javascript information visualization library, which I urge you to investigate on, as it’s a wonderful and really useful open source project led with incredible passion. (it has a BSD licensing scheme)