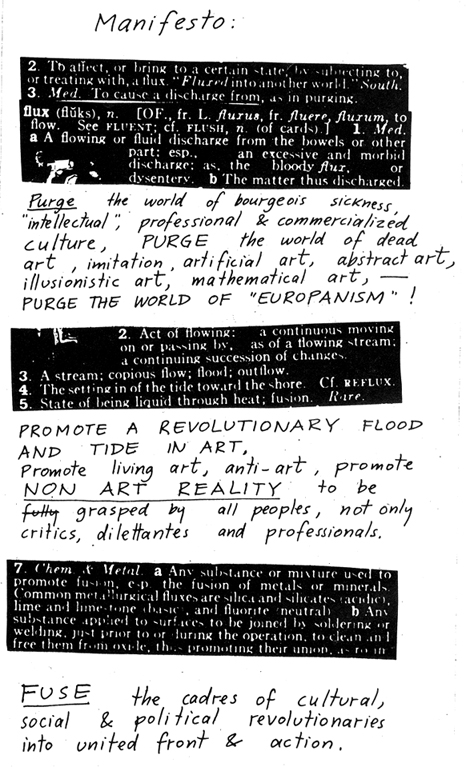 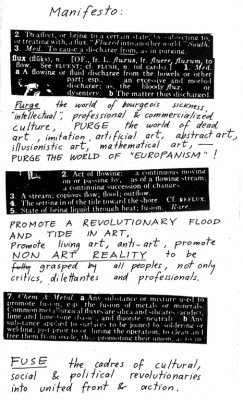 FLUXUS was a variable group of artists working in what has vastly been called Neo-Dada and visual arts, but really worked intermedially across visual arts, design, video, music, performance and architecture.

Vastly inspired by the work of John Cage and, in a way, organized by George Maciunas, FLUXUS was a natively networked movement of artists that were already working and collaborating along the same lines, internationally.

The term “intermedia” was coined by fluxus artist Dick Higgins to describe what, during the 60s, was a really innovative approach in which arts started moving across materials, practices, technologies and genres, defining entirely new ones or even incredibly significative hybrids.

FLUXUS artists worked with found materials with a DIY (Do It Yourself) approach, often establishing profund collaboration practices or experimenting the ideas of randomness and the recombination of everyday objects and events into artistic expressions.

Various kinds of materials and technologies were used to enact this approach, including the first video experiments by Nam June Paik and John Cage’s musical creations built using appliances, everyday objects, and things coming from offices or ordinary houses. The diffused tendency operated by fluxus artists was to both “open” the artistic process and to layer artistic visions onto the flow (fluxus) of ordinary life.

The DIY approach is typical of the first objective. Here, artistic gestures and approaches were disclosed, and the methodologies and techniques were described as something that could be accessible to people, for comprehension and reenactment. Even on the strategies of price: while “ordinary” artists produced very limited numbers of highly expensive works, fluxus artists (for example Maciunas himself) produced their works as if they were to be mass produced and made available at very low costs. Art was open, interactive, accessible and collaborative, as the person experiencing the artwork was required to intervene and act, or even suggested to replicate and diffuse gestures in other contexts.

As for the second approach, FLUXUS’ assemblage and recombination of everyday objects and practices transformed the imaginaries connected to ordinary daily life, creating through aesthetics, experiences and interactions, additional dimensions in which any object or space could be perceived. Objects acquired the magical aura of art by simple recontextualizations or juxtapositions, as sounds, visions and other sensorial experiences aggregated through performance and interaction.

Art flowed with daily life as one single environment with multiple possibilities opening up for world codification and experience.

This disruptive approach to art and life was crystallized across a series for practices.

The production of the so called Fluxus Boxes was one of them.

Fluxus boxes were a peculiar form of expression in which the artist gathered a series of objects, cards, materials and components and assembled them in boxes, suitcases or other containers. The assemblage was created with multiple purposes in mind: creating suggestions and tangible poetics by juxtaposing things was something that the cinematographic montage had learned since the beginning of the century, and it was also explored by musicians such as Cage, where the sounds of known objects acted on levels that are simultaneously physical, symbolic and referring to memory and cultures.

Just as cinema montage and music had learned, the orchestration of symbols, visions and other sensorial components was able to create novel scenarios. Interactivity and tangibility created a state of continuous recombination, multiplying interpretation and cognitively activating people, who became part of the artwork while handling, imagining and communicating. The connection with the ordinary flow of life created new dimensions in the world: stratified, recombinant and engaging.

In occasion of the 50 years of FLUXUS we have decided to research on this wonderful form of expression, both for the innovation it has provided in the arts and for its connection with many of the mutation processes that are going on with contemporary humanity and their ability to experience media, communicate and interact.

At the event Mercoledì da NABA series of events, on December 15th 2010, we will hold a workshop/performance in which we will build a Fluxus Box using Augmented Reality and other cross-medial techniques and technologies.

The ojective will be to research on the Fluxus Box approach, and to appy it at a “meta” level. The objects contained in the box will be tools through which the experience of multiple Fluxus Boxes will be holdable, remixable, juxtaposable, recombinable, enacting a meta-performance encompassing possibly infinite remixed reenactments of Fluxus performances, experiences and events.

The box we will produced will be donated to the NABA, and the custom software that will be created for the occasion will be released under a GPL2 licensing scheme, so that it will be usable by artists, students and practitioners worldwide, in a further level of the performance.