Going to the Publicamp in Bari.

Arriving at Stazione Termini, Rome’s central train station, this is the scenario we found. 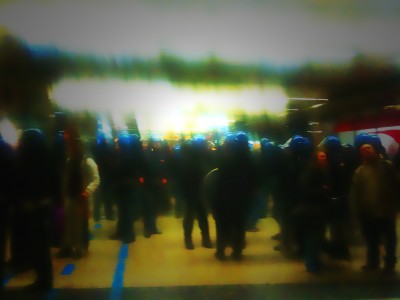 During the last few days students have been heavily proclaiming their dissent to Italy’s crisis in culture, economics and, specifically, education.
Situation is really complicated over here, in something that any external observer wouldn’t have any difficulty in defining a mediatic regime, or even a soft dictatorship.
Italy’s culture has been shaped through 20+ years of television, creating a ubiquitous numb, stereotyped, passive, crude middle class that is naturally inclined towards lament to the things they don’t like in society, envy of power, total engagement with the spectacle and complete egocentrism, absence of historical memory or the ability to blissfully look aside when things are harsh, but not for them.
This is the situation.
And it constitutes an incredibly fertile humus for this kind of power. Working on desire, imaginaries, visual seduction.

We were more than 1 hour late in Stazione Termini today. And during the wait we saw students protesting against all this.

This form of protest does not go anywhere. We know it. Masses of people screaming and protesting. But tomorrow there will be leaders once again, power once again, hierarchy once again. There is hierarchy now, inside the protest. And people who will make a career out of it.

This will not go anywhere.

But it’s right. There has to be a protest. Mouths must open, legs must walk out of houses, arms must wave flags and megaphones.

Against this power that is able to change information, to be vulgar, sleazy, filthy, who is able to lie and who has the power and resources to both pay and wait for things to happen, in a perpetual state of corruption, cognitive violence and creation of instrumental imaginaries and languages.

We were really late today. But it was worth it.

and now, on to Publicamp, in Puglia, in the south of italy. Where multiple interesting things are happening. Where some people actually feel they can call their land “a land of opportunity”.