Art is Open Source and Fake Press will be presenting an enormous interactive infoaesthetic environment at the Festa dell’Architettura of Rome, from the 9th to 12th of June 2010.

The interactive environment is named “Atlante di Roma” (Atlas of Rome) and it is an instance of a wider project which will be launched online on the website http://www.atlantedellevisioni.net . The project is curated by Paolo Valente, who practically made everything possible. The Atlas has another component which is called ABC Roma by Giuseppe Stampone.

Index Urbis, the logo of the Festa dell'Architettura

The idea is to create a display/interact environment that is able to let people experience multiple views on the city they live in or that they’re visiting, and to research and investigate on the visions that architects, artists, institutions and, in general, other people have had on urban spaces, through projects, actions, competitions, events, works, performances, research, institutional or political actions.

The system will be open to anyone and is designed to be reused, reshown and re-shared multiple times.

the brochure of the Atlante di Roma

The environment is built from multiple components:

on the projection 4 interactive infoaesthetic representations show the visions hosted in the Atlas and the interactions of the individuals choosing to be part of the experience:

In Linearity the visions take the form of mechanisms grabbing their life energy from the interactions among individuals and themes. Spheres represent visions and, while moving, they are constantly fed from the themes that they explore. 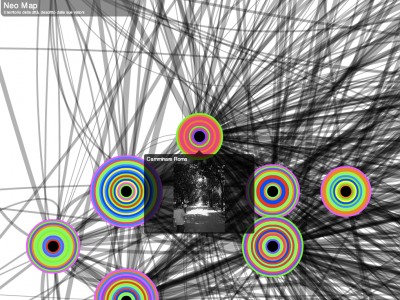 Neo Map explores territories bypassing their geophysical or toponomastic characteristics, and describes them theough the projects, actions and the lives that exist in them. In the visualization circles represent the visions, dislocated according to their reciprocal geographical locations and connected by subjects, thus creating a new visually semantic geography. 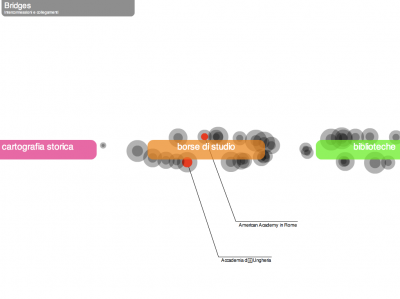 Bridges explores interconnections. Visions orbit around the respective themes, in a cyclic procession. Visions and themes dynamically show bridges and interconnections, according to he subjects and actions that they share. 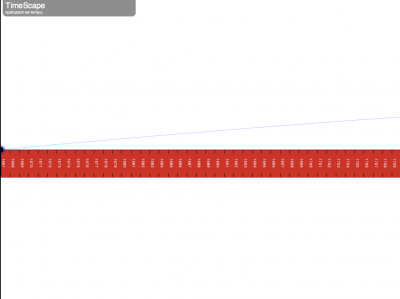 Timescape transforms the passage of time into a landscape. Visions are represented in their time dimension, occupying spaces that are proportional to their duration and sequence. A geography defined through time and correlation is made visible and interactable.

The sounds populating all of the visualizations are completely generated by the contents, interactions and from the emerging data, inferring new relationships among people and projects and representing them in sounds.

4 multitouch screens will allow people to interact with the environment, controlling interfaces that will materialize directly onto the large projection.

come join us at Index Urbis for the Atlante delle Visioni!