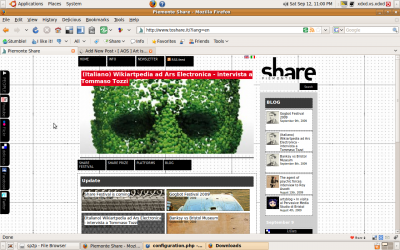 You can check it out here on http://www.toshare.it
We’re particularly happy both because it was a joint effort between Art is Open Source and because it is yet another beautiful collaboration that we’re bringing up with them.

The website has been in design for quite a while, as we planned for the creation of quite a complex setup. What we had in mind was to create a platform in which people could contribute to the contents of the website by enabling a re-blogging environment.

The ToShare team is currently getting people involved in the areas of design, new technologies, contemporary arts, circuit bending, robotics, and more. If you think you have something interesting to say, and can expose it through a RSS feed from your blog or website, write them a line or two explaining what you’re up to and chances are that you could join in the platform.

And, if you don’t already know about it, get ready for Market Forces, the 2009 edition of the ToShare Festival. Guest curator Andy Cameron joins the Share team to explore the contemporary world through complexity and crisis. And we’ll have something to say about that, too. But we’ll leave it as a surprise, for the near future.

In the meanwhile, we leave you with just a hint on what we’ll be collaborating on together with the Share Festival  team: Squatting Supermarkets.