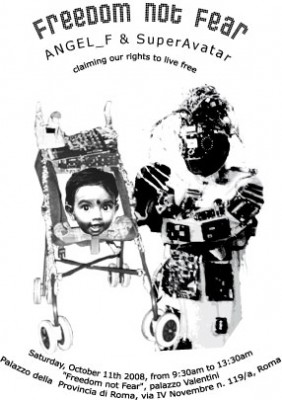 The lives of the young artificial intelligence and of the  avatar who escaped from virtual worlds have been endangered  more than once by the control, that is constantly perpetrated on people’s information, habits and identities.

Forms of surveillance that are progressively and obsessively  expanding through continuous control of our lives (and not  only of the ones of our beloved digital beings). Along the streets, in supermarkets, in public spaces, and even in our homes, through telephones and internet connectivity.  An enormous amount of resources are wasted to control people’s  lives in multiple ways: from cameras to armed forces, passing  through data retention systems spying on people’s personal  information.

Angel_F e SuperAvatar are feeling annoyed, alarmed and outraged by all of that and, therefore, decided to publicly show their dissent, together with their human friends.

The two digital beings will join the “Freedom not Fear”  event, and they will attend the conference that will take  place at the “Provincia di Roma” building on saturday,  starting at 9:30am.

Angel_F is the young artificial intelligence son of Derrick  de Kerckhove and the Biodoll.
It was born on February 2007. Since it started interacting with humans’ physical world it has been deeply interested about the international dialogue on digital rights. After a peculiar case of censorship, little Angel_F managed to attend the UN’s Internet  Governance Forum held in Rio de Janeiro all by itself.

Fatherboard – the SuperAvatar – is an avatar that escaped  from virtual worlds when its owner’s computer exploded in  a short circuit.  It looks like a cyborg, but it isn’t, as its body is built from the hardware parts of the computer from where it materialized.
Its relations with human beings are contradictory and intermittent: the SuperAvatar is a fugitive living a constant conflict with institutional control, either the virtual and the real ones!