When Salvatore Iaconesi was diagnosed with cancer he left the hospital and started La Cura, a global performance to reclaim our bodies an identities by creating a participatory open source cure for cancer

“La Cura” is a global art performance about the opportunity to transform our societies to become more active, aware, caring human beings by reclaiming information and knowledge, and by feeling the desire to be part of a society whose well-being truly depends on the well-being of all of its members.

La Cura started when Salvatore was diagnosed with cancer on September 2012. After that none of our lives have been the same: something incredible had happened.

Salvatore was not really satisfied with medicine’s approach to his illness.

As he said many times: “I felt as if I disappeared”.

Doctors are, obviously, the “good guys”: they are people who save lives every day, and who put professionality, intelligence, creativity, passion and dedication in what they do.

Yet human beings who are diagnosed with serious illnesses such as cancer often become part of a process which is too industrial. Medicine too often talks about them, not to them. The language doctors speak is not intended for patients, nor is the information that is generated during the illness. Images, exams results, lab values, are all things that do not speak to diseased person, who literally has to become a patient: to wait for something/someone to do something.

And this is only the tip of an iceberg whose essence is about the complexity of being human and part of a society.

Even the enormous advancements of medicine and its practices haven’t been able to address this complexity. People who are diagnosed with grave diseases disappear, replaced by the disease itself.

They become part of an industrial process (or neo-industrial, or post-industrial or crowd-industrial, in these times of digital change) which reduces human life to a set of protocols, procedures and to a series of services to access to benefit from things that feel like a vacuum in more than one way: the disease becomes the focus of one’s life (and of his friends and relatives), leaving out fundamental unanswered questions about the person’s life, sociality, emotions, knowledge and freedom to express, decide and be active in informed, positive ways.

La Cura is about this: is about avoiding loosing this fundamental perception of this complexity, about the fundamental need to avoid reducing human life to the simplicity of a set of protocols, procedures and services, and about the possibility to reclaim/rebuild a social/psychological/anthropological space in which all this complexity can happen.

It is a story which has deeply touched all of us, in exciting, emotional, sometimes dangerous, but always overwhelmingly insightful ways:

And, most of all, it is the story of the will and desire to live a free, informed, active, positive life, and of the need to feel part of a positive human society to fully achieve it.

It is an Open Source Cure for us all.

La Cura at the time of COVID19
BodyQuake. A Concert for Bodies + Data
La Cura and the Monsters in the Machine
Creating an Augmented Sense: ubiquitous bodies
Ubiquitous Bodies
BAOTAZ at Fondazione Neuromed
Interconnected Brain, Augmented Sense-ability
Augmented Sensibility: a Summer School with La Cura and the interconnected life on the planet
the encounter of two books, in Trieste: from mental asylums to La Cura
La Cura at ICEEFest in Bucarest
La Cura and The Festival of Creativity in Ariccia, to study the biopolitics of interfaces
La Cura, Erbe Indisciplinate: the report from the workshop at RuralHub
Erbe Indisciplinate, a workshop and a conversation on La Cura
La Cura at Perugia's International Journalism Festival
Hacking Melanoma
La Cura at Dreamers Day in Milan
La Cura featured on TED.com, and some exciting news
3 days in London with Human Ecosystems, La Cura and Ubiquitous Commons: report
An Open Source Cure for Cancer at King's College in London
The Participatory Condition: Open Source Cancer. Brain Scans and the Rituality of Biodigital Data Sharing
La Cura at Data Viz or Data Touch, in Paris
La Cura, at Wave, with Susanna Pozzoli
La Cura on Neural #47
La Cura at Participatory Medicine in Montreal
La Cura, after the presentation at Transmediale 2014: Afterglow
La Cura at transmediale: Afterglow
La Cura on Usbek & Rica
The Mirror and The Source @ Penny W. Stamps Speaker Series
La Cura on BigData
La Cura at GoodMedia in Genova, Italy
La Cura on Le Monde
La Cura on "Il Tirreno"
La Cura at TEDMED 2013
La Cura: Salvatore Iaconesi at TED Global 2013 in Edinburgh
AOS at NextFest in Milan
La Cura, an Open Source Cure for Cancer, at TEDMED 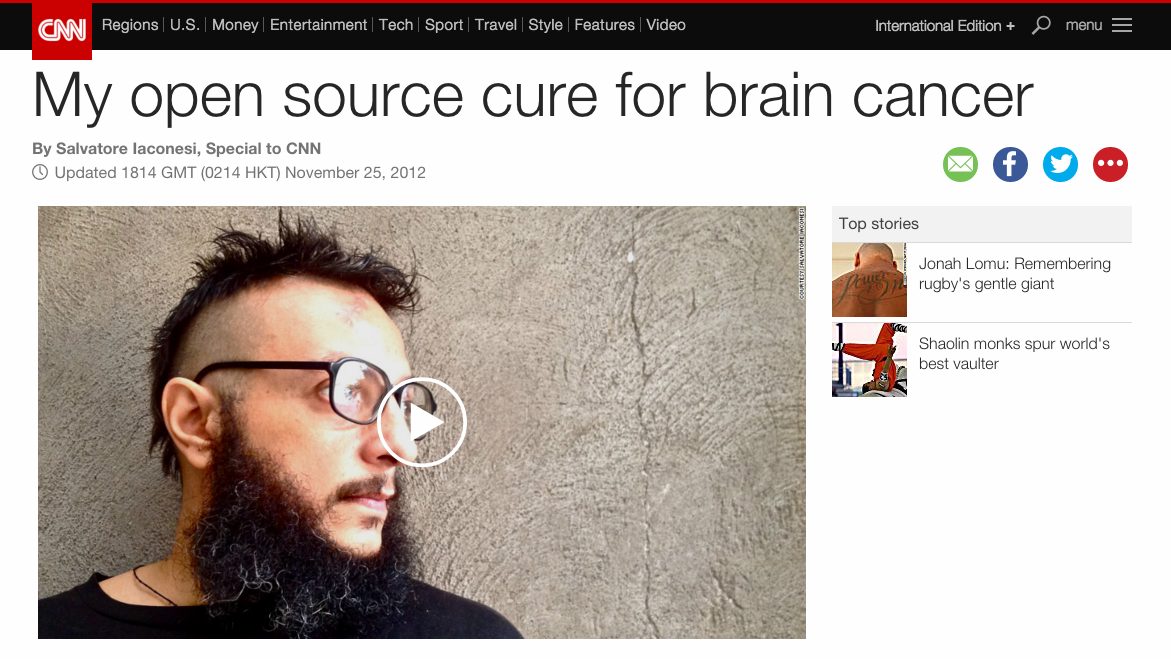 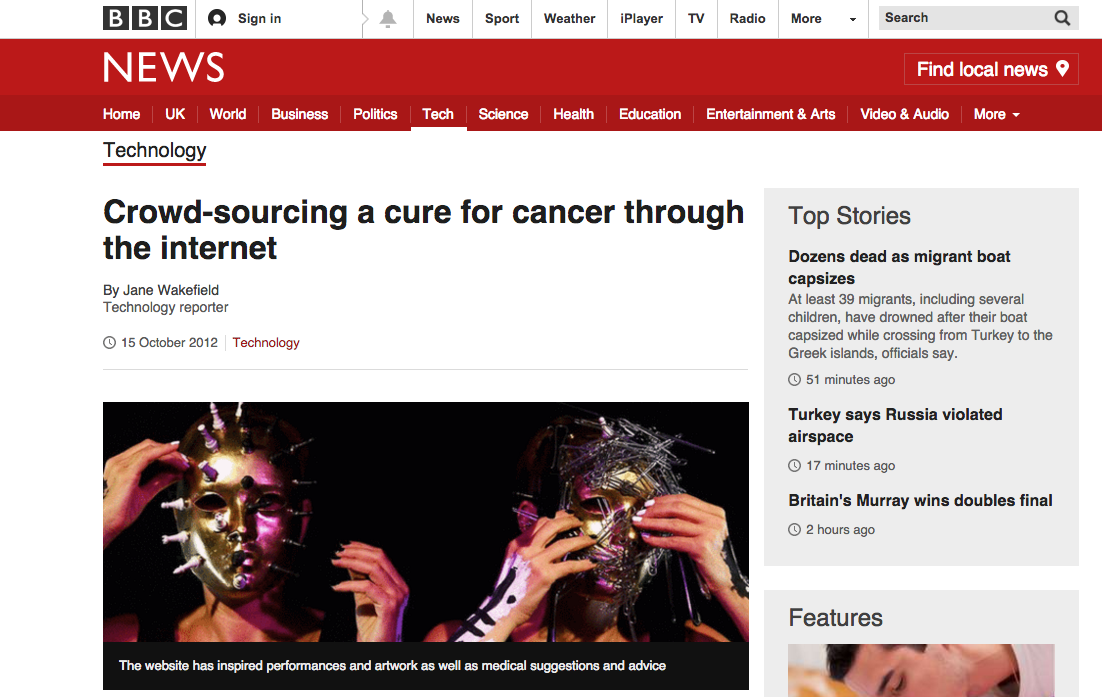 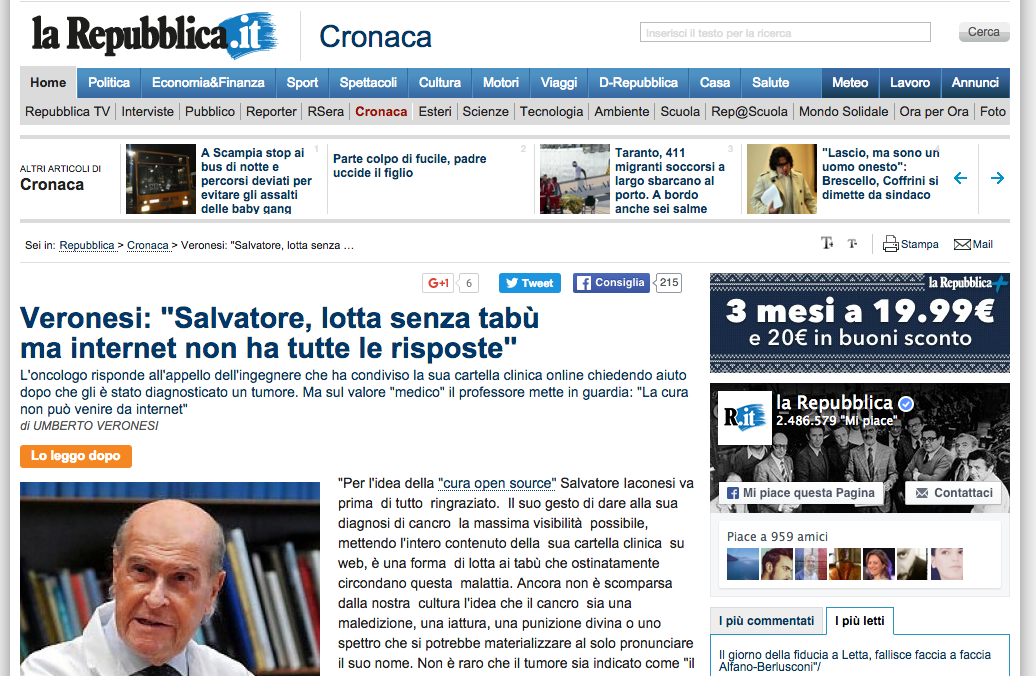 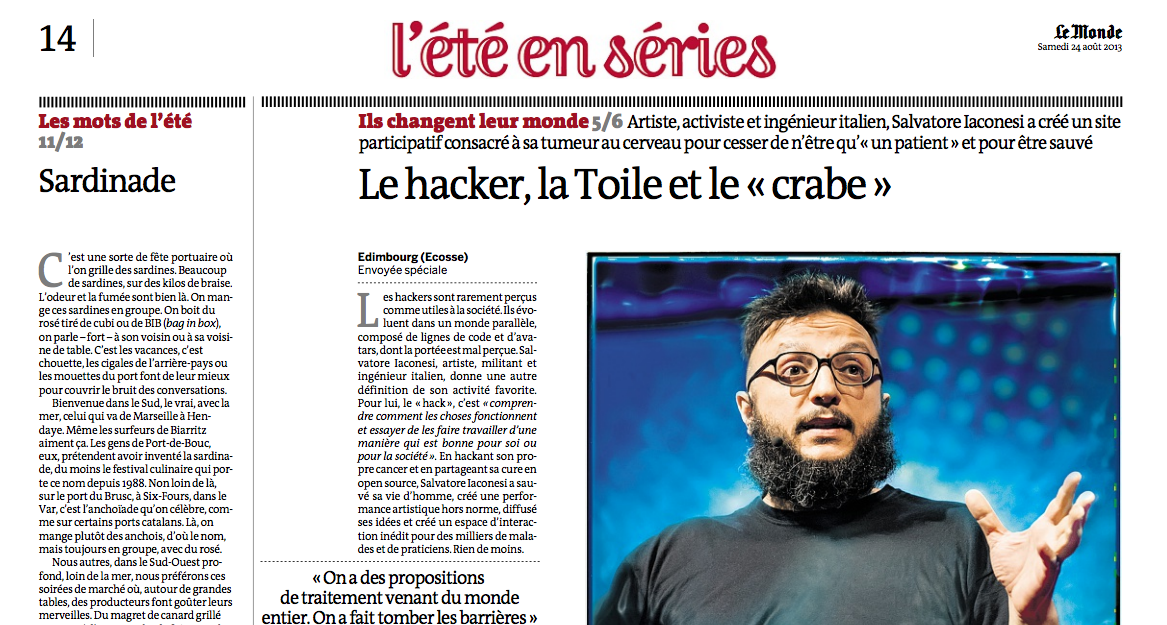 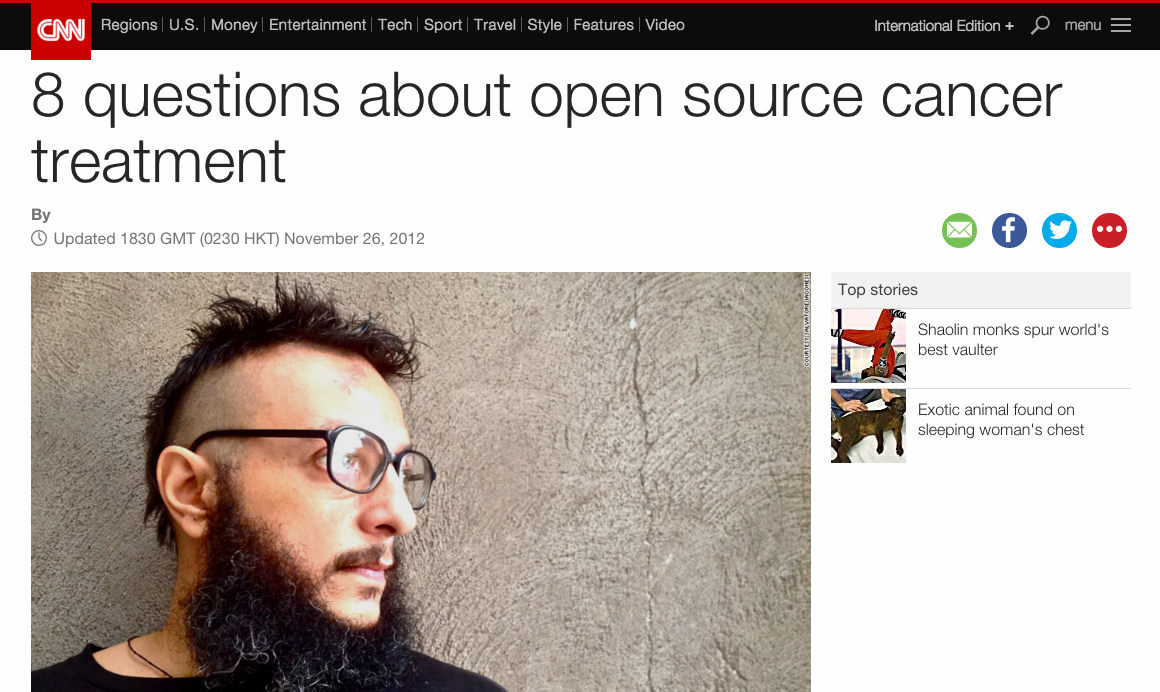 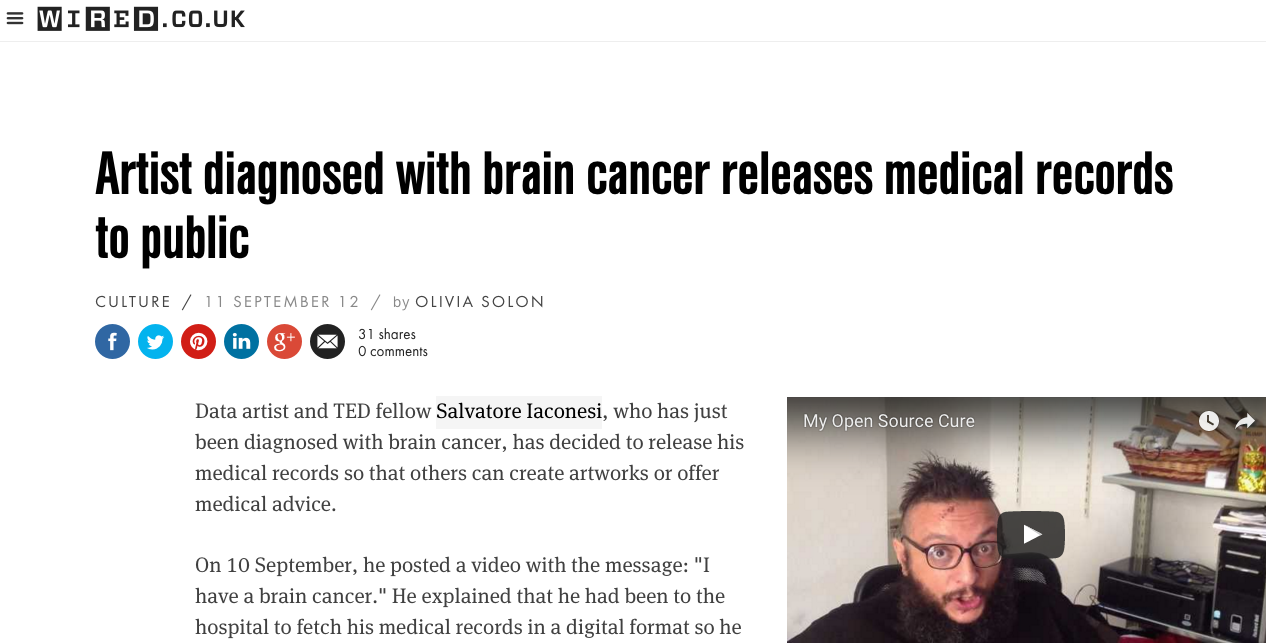 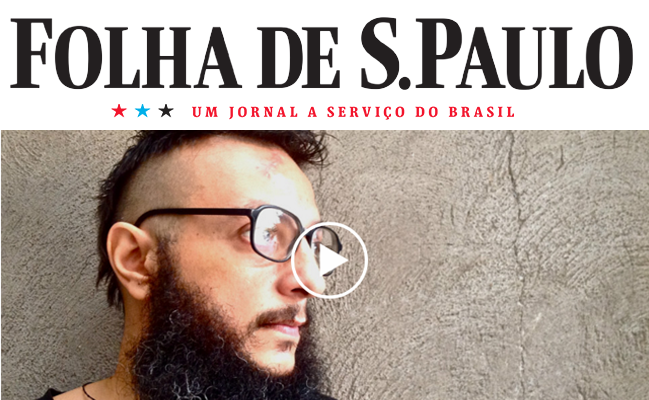 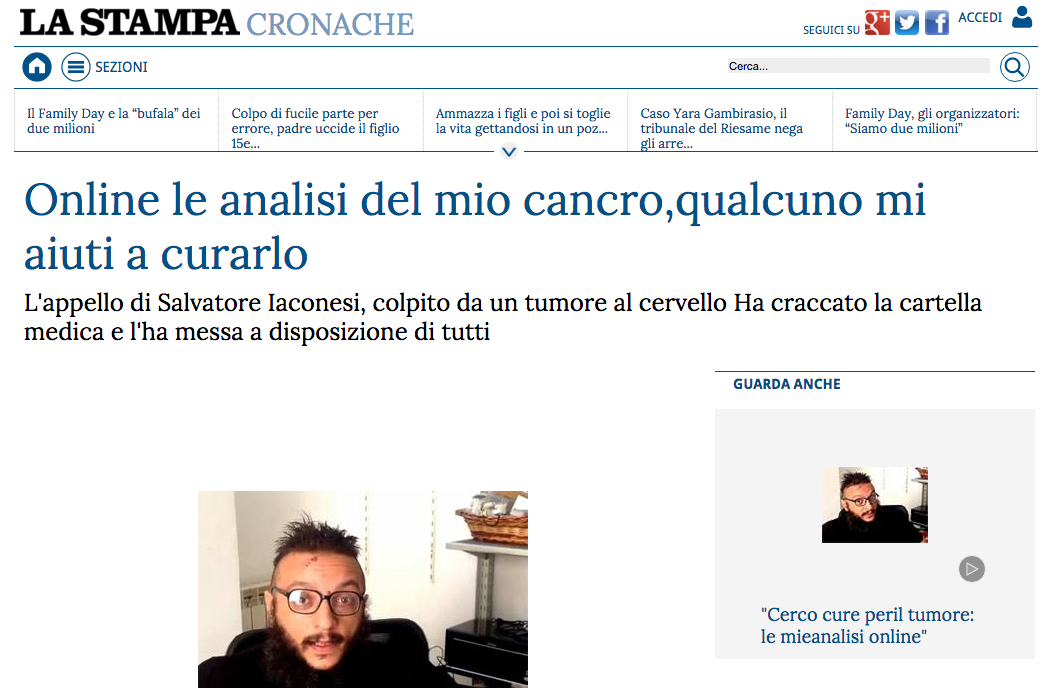 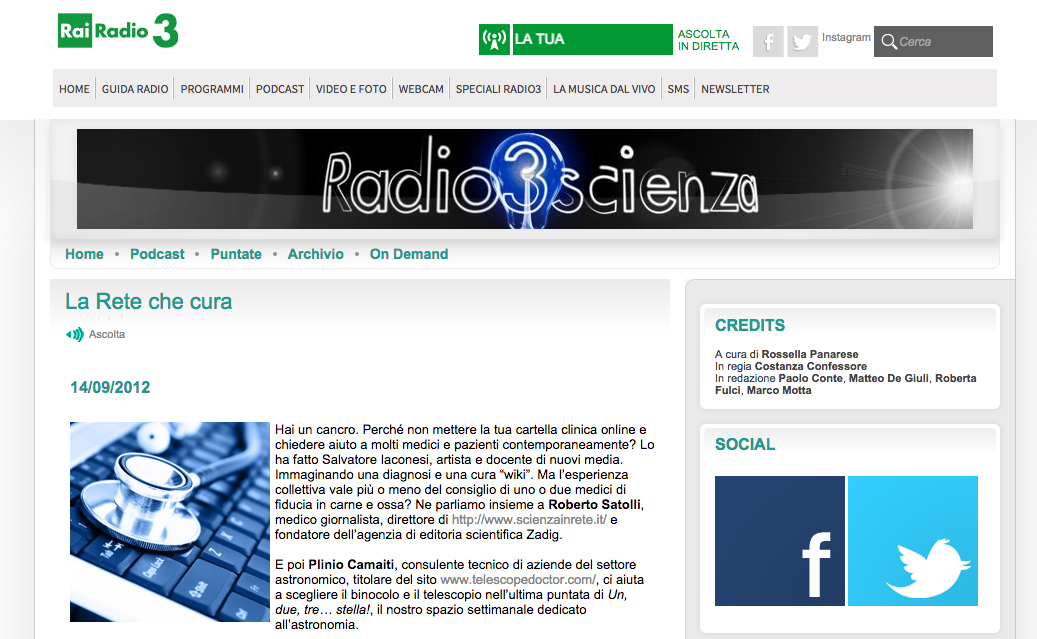 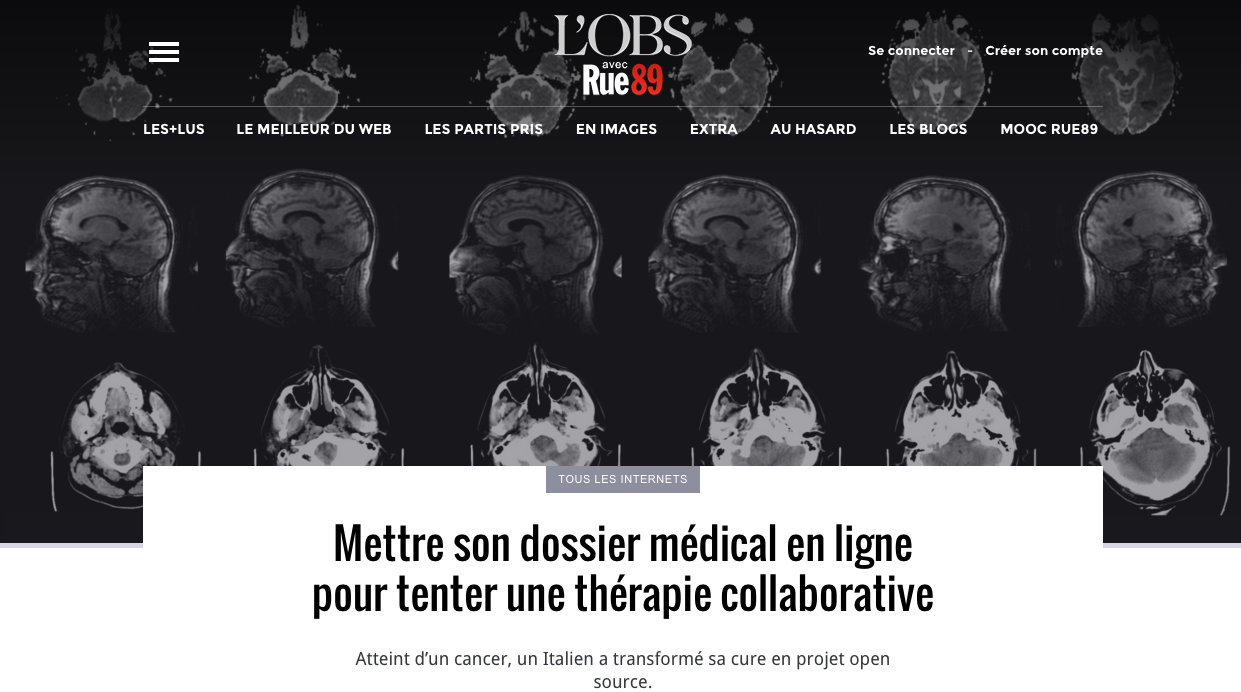 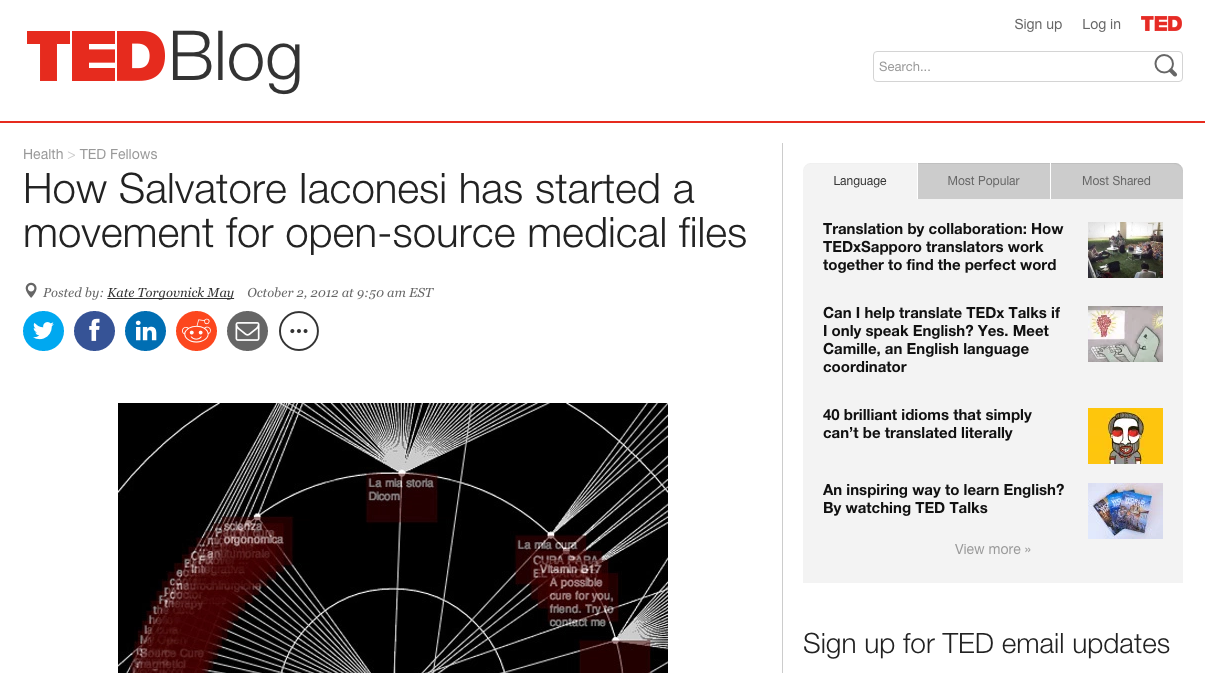 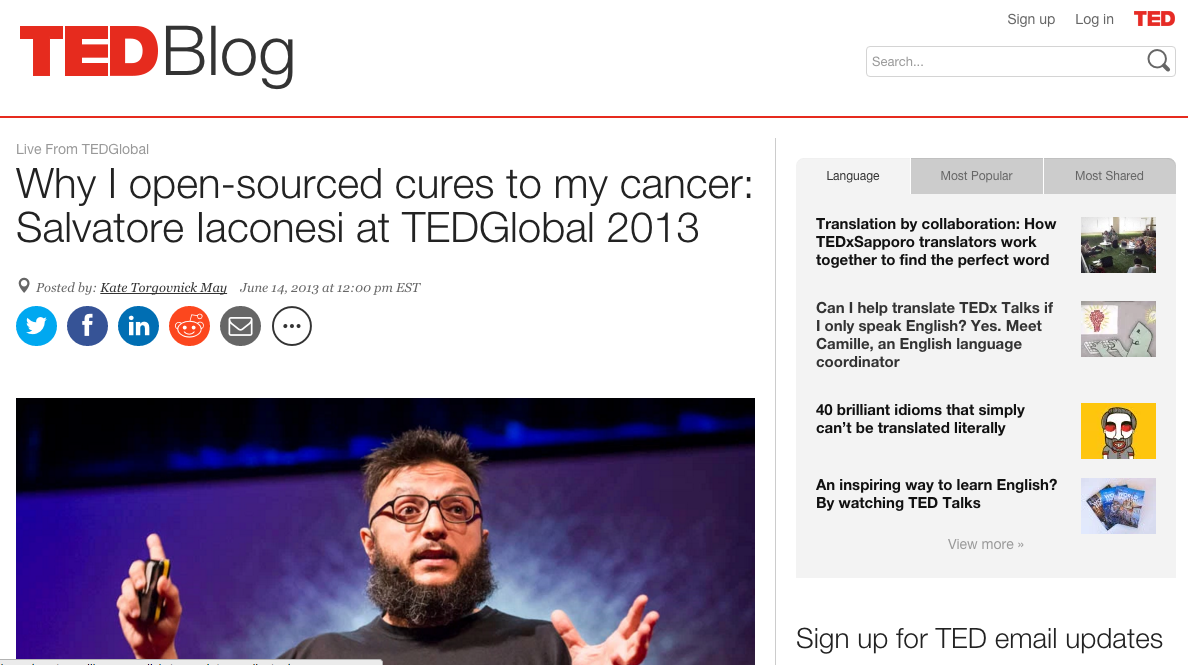 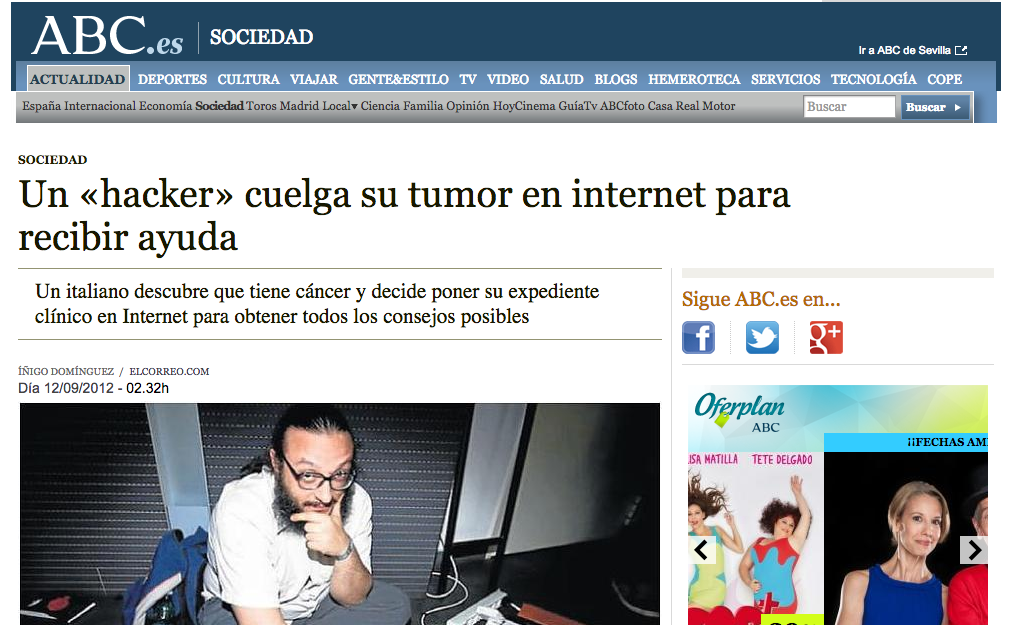 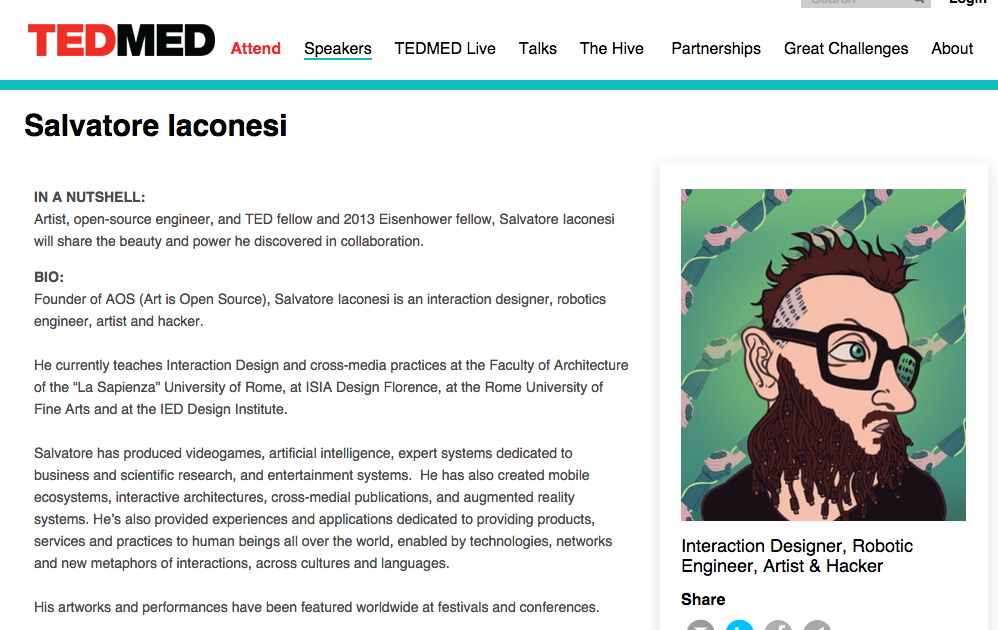 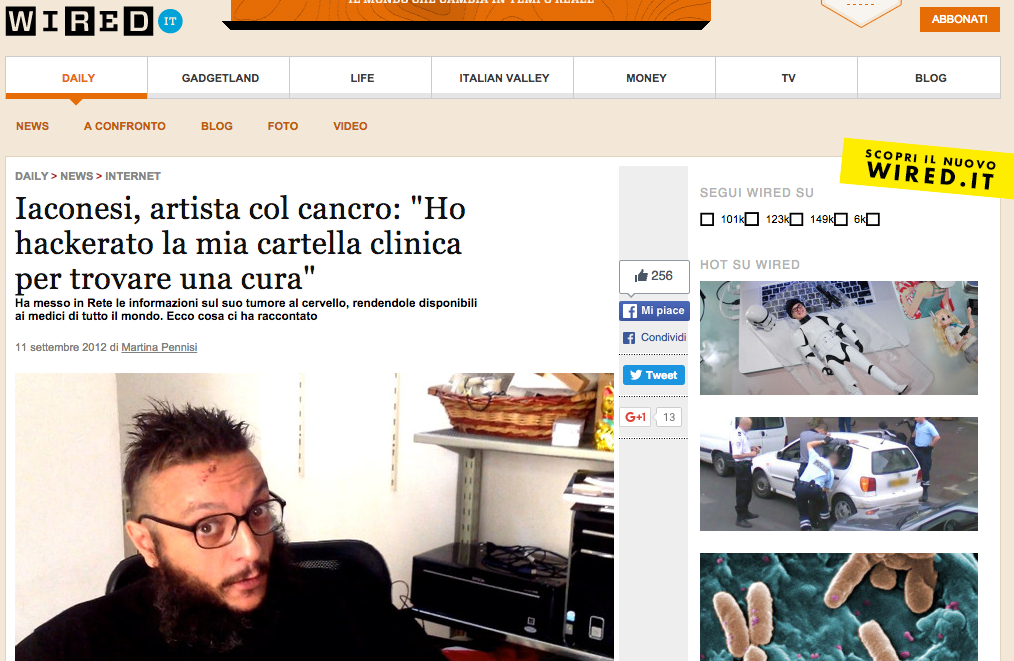 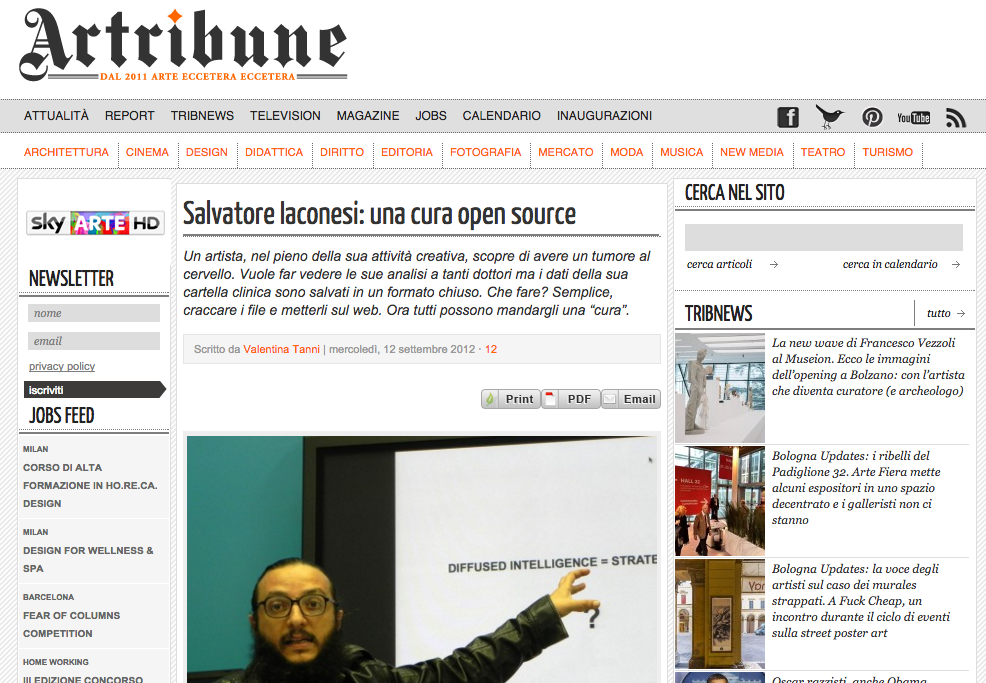 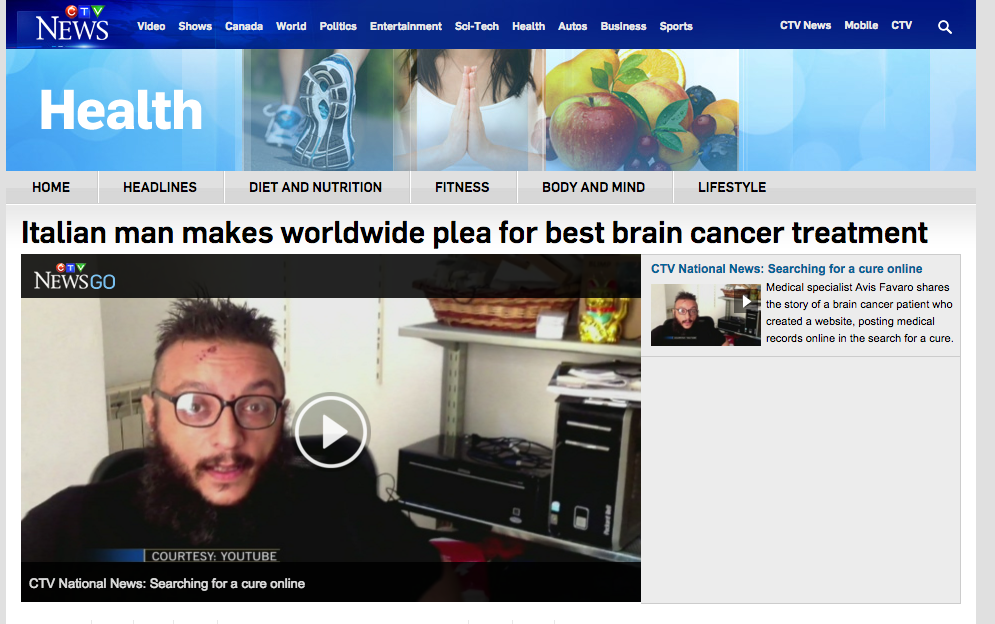 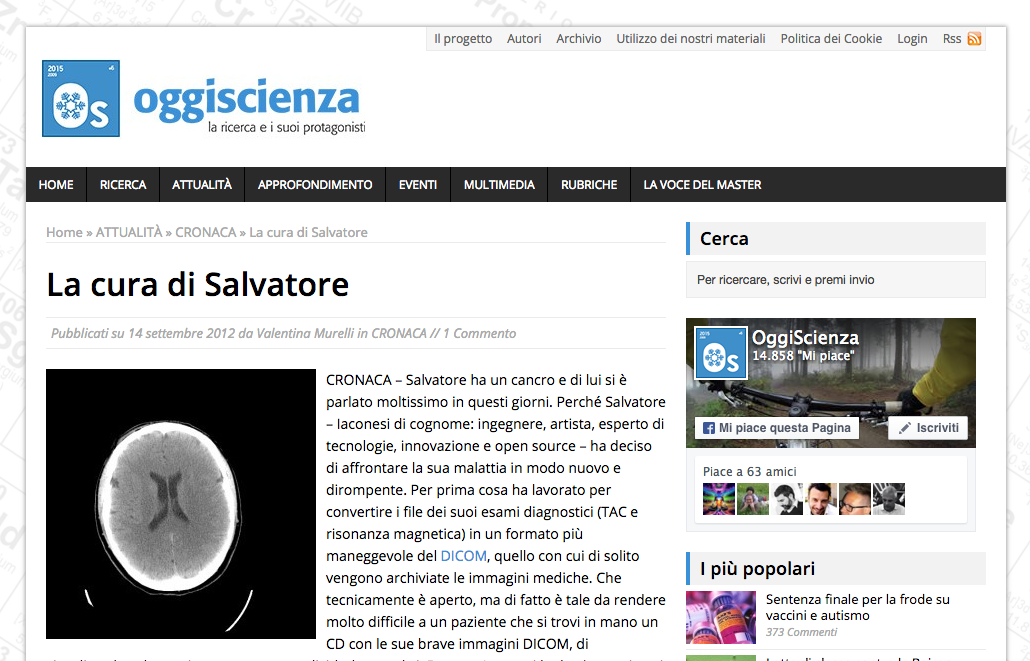 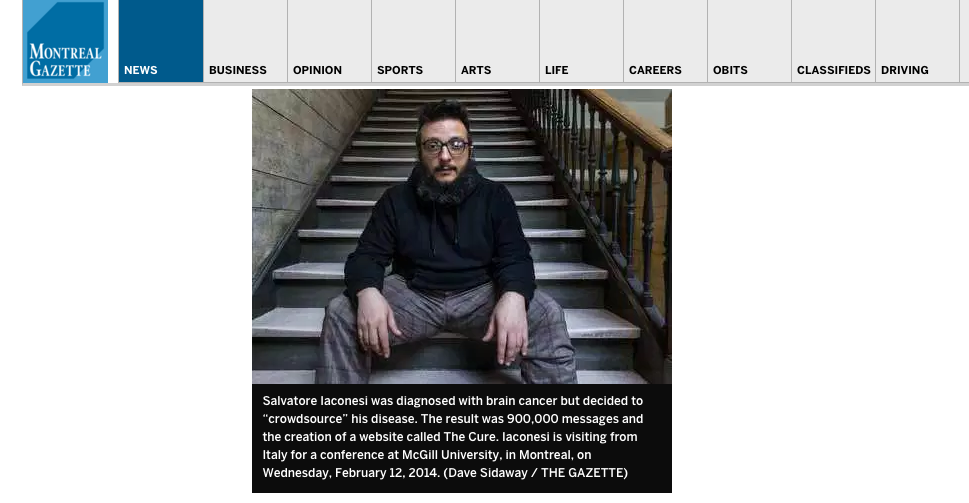 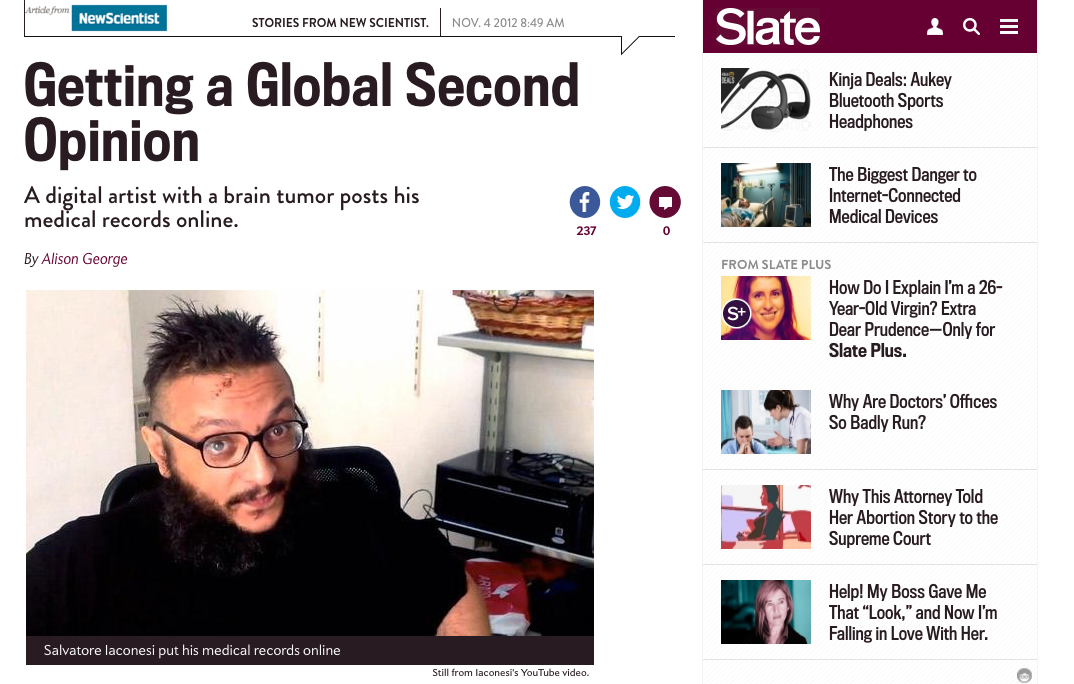 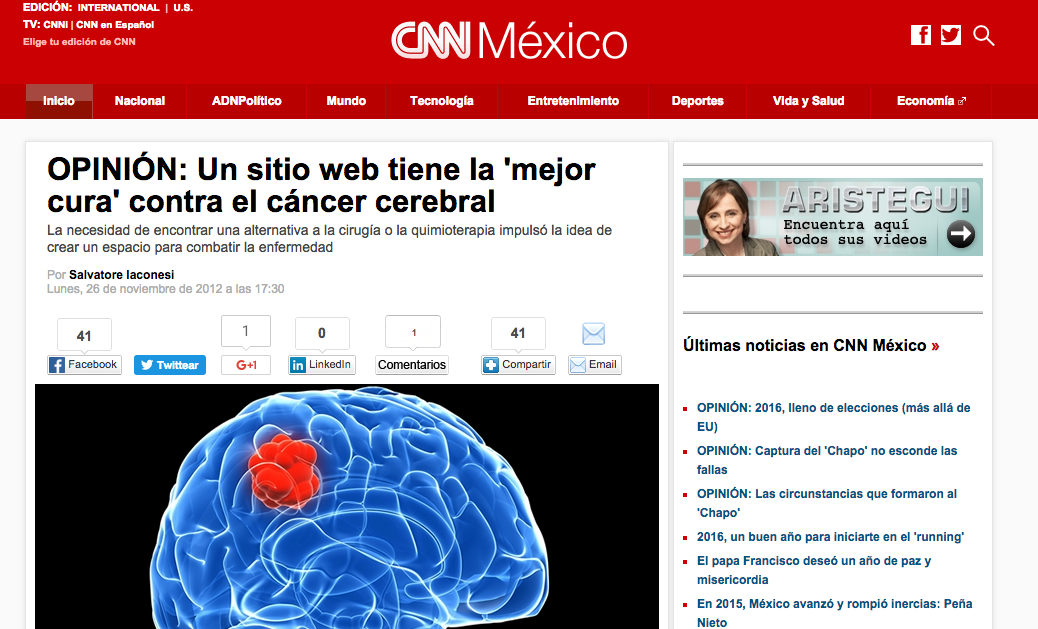 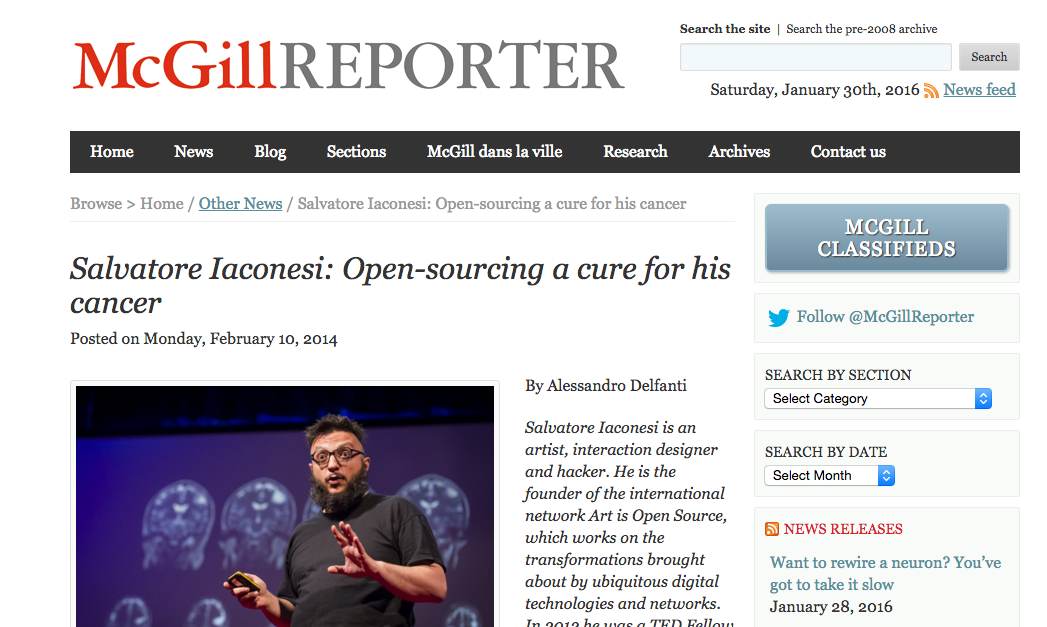 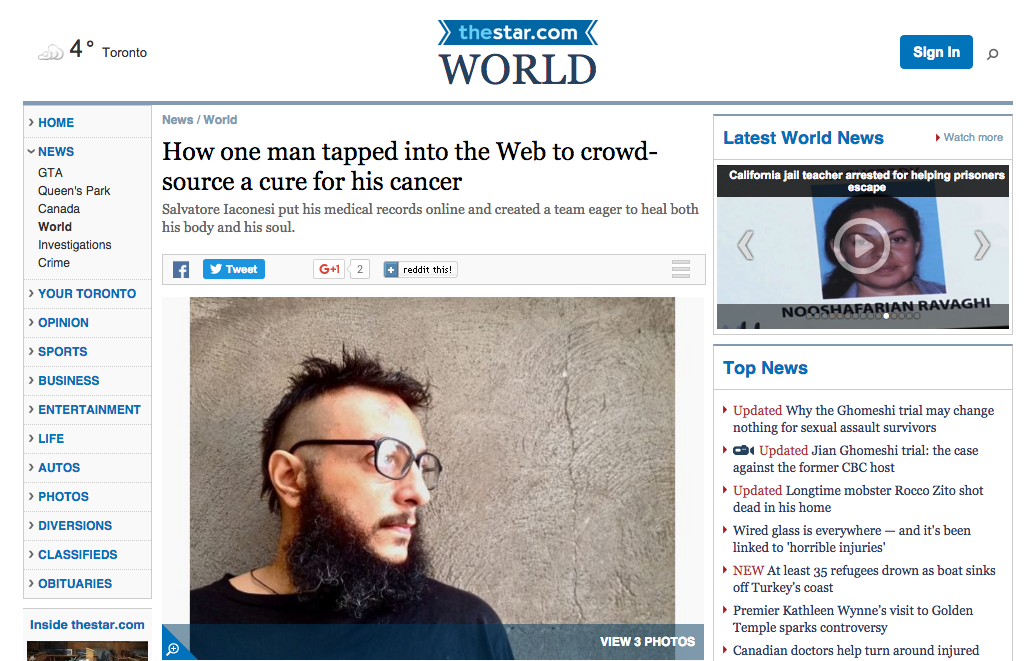 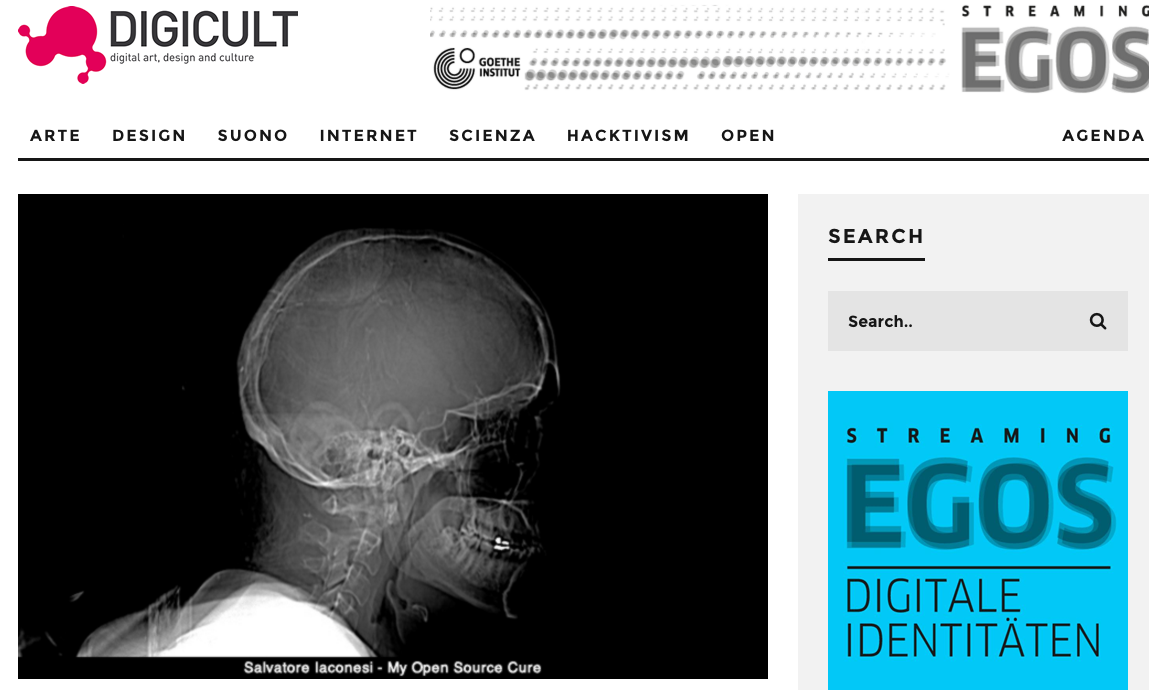 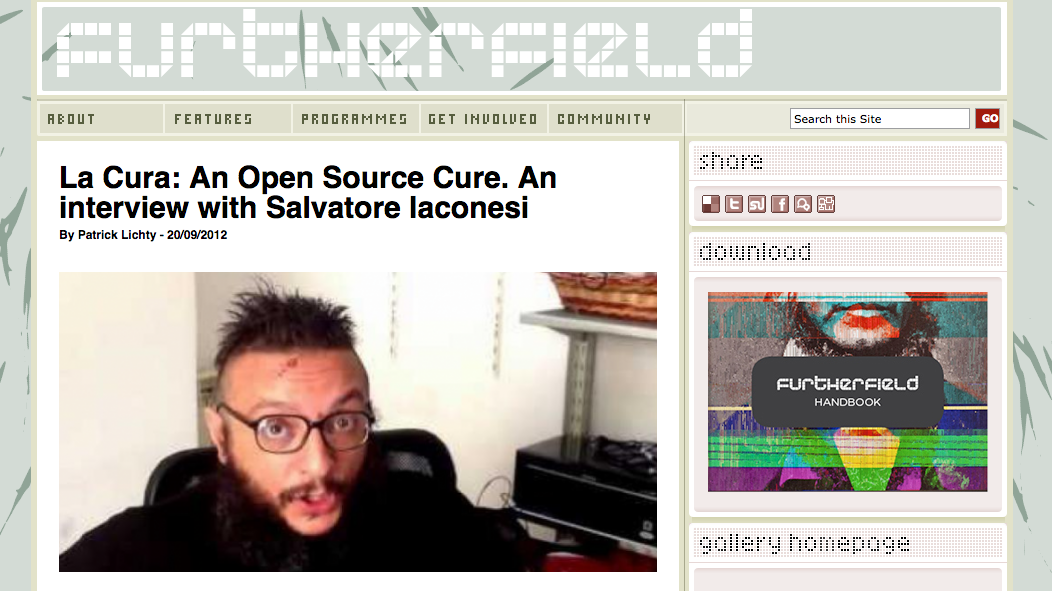 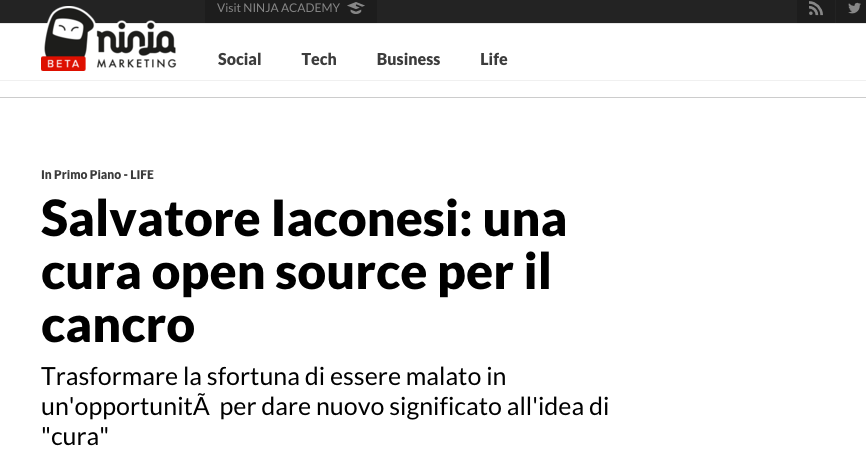 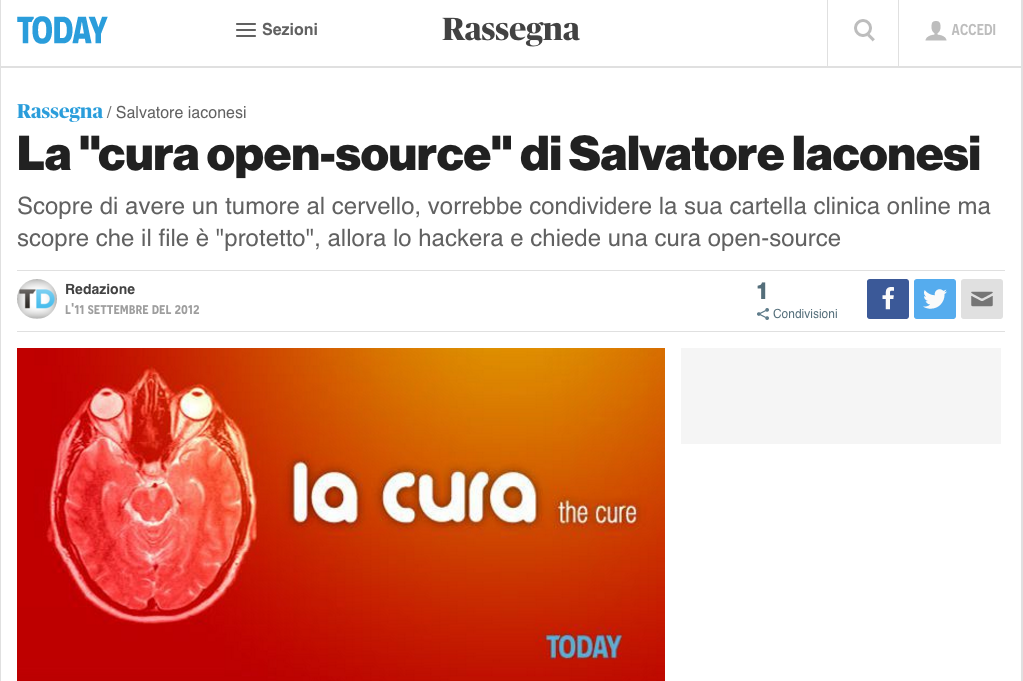