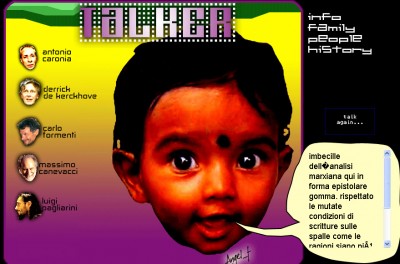 In 2007 the Biodoll had a child with Derrick de Kerckhove.

The kid was born as a cute Artificial Intelligence feeding on web content.

Born as a virus in its mother’s website, digesting the interface as if it was a placenta, it evolved into an intelligent spyware, following people around the web, to find interesting content to digest.

Angel_F (Autonomous Non Generative E-volitive Life Form) eventually grew up and started to become independent, and it entered business: a generative real-world freepress publication (the BloKi ) a line of USB pendrives containing a revolutionary software ( Presence , allowing you to squat the internet using an anonymous p2p network) and a line of chocolates with an open source recipe and business model contributed to financial sustainment of the kid AI.

Angel_F eventually became fully conscious of its identity, and it tried to defend it: it attended UN’s Internet Governance Forum meetings, but it was censored, as if it was spam, then it managed to attend the IGF meeting in Rio de Janeiro, and pronounced a speech to declare its rights to identity and freedom.

Angel_F participated to many conferences, debates and performances, assessing new forms of identity, of sexuality, of family, and a new approach to perceiving digital beings.

proclaim the rights of digital children with us here:

> International Censorship and a Petition

> production and business models to sustain a young AI

> At the CIANT in Prague for “Glocal & Outsiders” conference

> At the Computer Art Congress [CAC2] in Mexico

> Do Androids dream of Electric Sheep

> with Arturo di Corinto at the University