Myriads, Trangression in the Post City: after Ars Electronica 2015 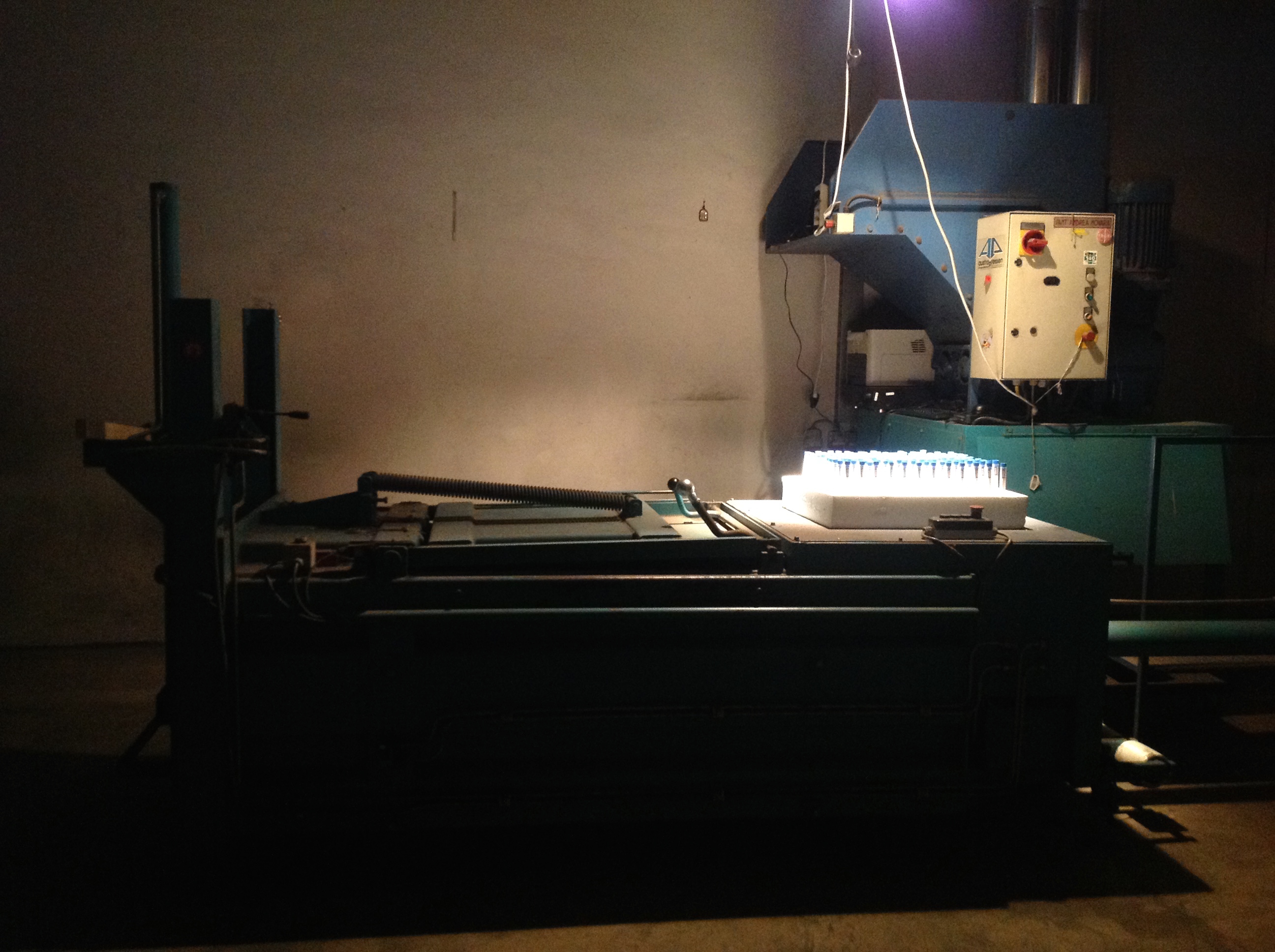 Some times has passed after Ars Electronica 2015, and our participation to its exhibit and to education programme with the Myriads project, part of the Human Ecosystems and of the Ubiquitous Commons.

In this post we wish to share some images from the exhibit, some information and materials about the 15 workshops we held while we were there, and some general considerations and perspectives for the future(s).

Myriads and Ars Electronica: some links

The Myriads exhibit constituted an environment in which everything you see/hear/experience is generated through the data massively captured in multiple modalities from the city. 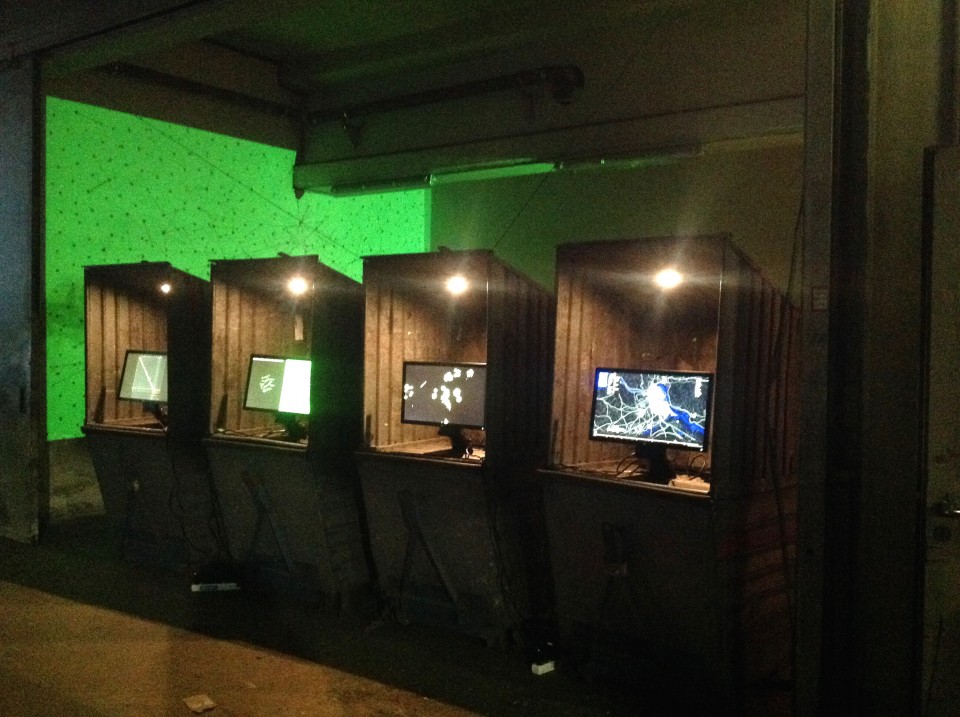 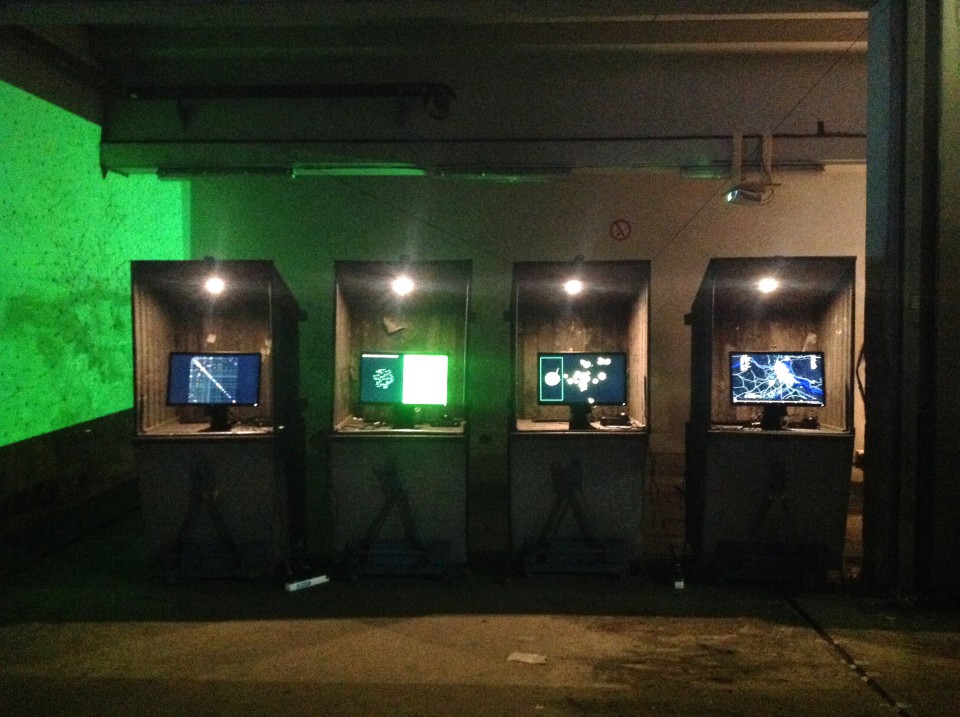 In this case, data was massively harvested from major social networks (Facebook, Twitter, Instagram) to gain understandings about the myriads of micro histories of the city, as they evolve with people’s behaviours, emotions, movements in the spaces of the city, and their flows of information, knowledge and communication. (the Human Ecosystems technology was used to perform the massive harvesting of this data, and for the use of Natural Language Analysis and Geo-referencing techniques interpret what emotions, movements, behaviours, topics, relations and flows were expressed by the captured messages).

Everything in the space was designed to show the passage from the industrial city to the Third Generation City, the  city of the flows of data, information, knowledge and emotions.

In the exhibit, the data coming from the interpretation of emotions, expressions, gossips, movements and behaviours, become the generative sounds, visuals and knowledge which you could see and access in the projections, screens, speakers, and in the workshops. As in Marco Casagrande‘s definition: the third generation city is the ruin of the industrial city, in which gossip, ruins infrastructures, transforming them into syncretic maps of the flows of citizens and their communications/exchanges in the city. 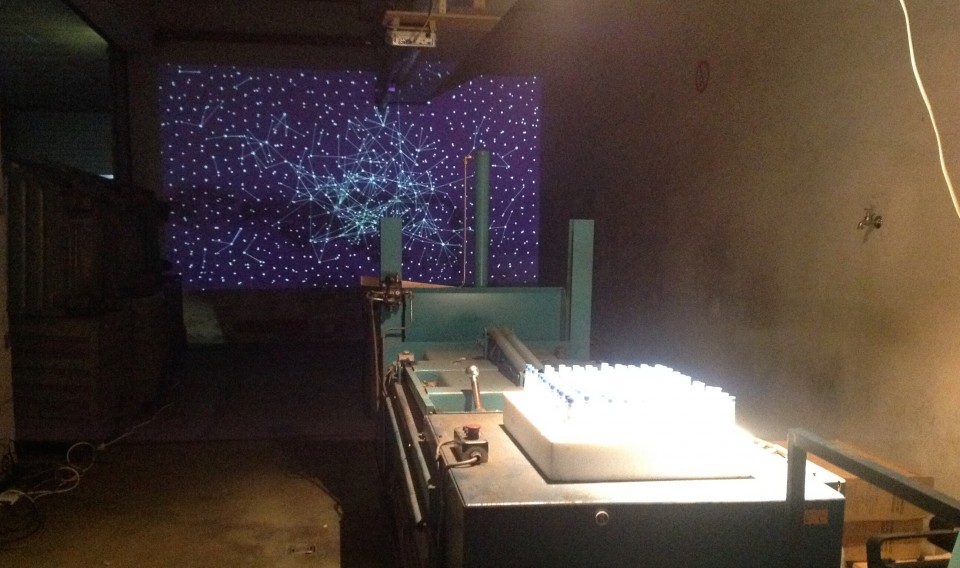 Myriads, the relations in the city

A large projection showed the most recent relations forming in the city, and expressed through our activities on social networks. Each time someone would comment, reply, or engage in conversations, the network shown on the visualisation would react accordingly. Each dot represents a person (or, better, a user on social networks), each line connecting dots represents a relation, with the line thicker or thinner according to the weight of the relations.

The sound heard in the exhibit space was the result of a data-sonification process which transformed the data of the sequences of emotions, expressed constantly on social networks, into sounds and waveforms.

The result was similar to this one (which is, instead, coming from the city of Rome, with the same process):

In another part of the exhibit four monitors, mounted onto metallic carts which were originally used to move mail envelopes and packages around in the enormous mail handling facility which hosted this year’s Ars Electronica exhibit, the Post City, continuously showed a series of info-aesthetic visualisations.

In the first monitor, the emotional map of the city was shown. 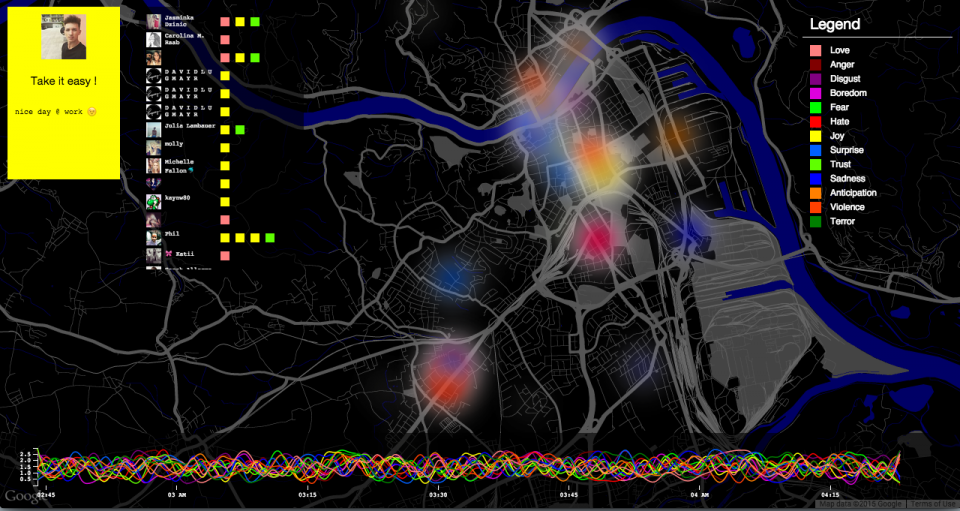 In the map, the emotions are color coded, and are shown on the map according to the locations in which their concentration was observed, and through a series of social network users (for whom their recent emotional history was represented) and posts (captured from one of the mentioned social networks, and coloured according to the emotion). On the bottom a timeline allowed to view emotions’ evolution through time.

A second visualisation showed the relational ecosystem of the city, as expressed through social networks. 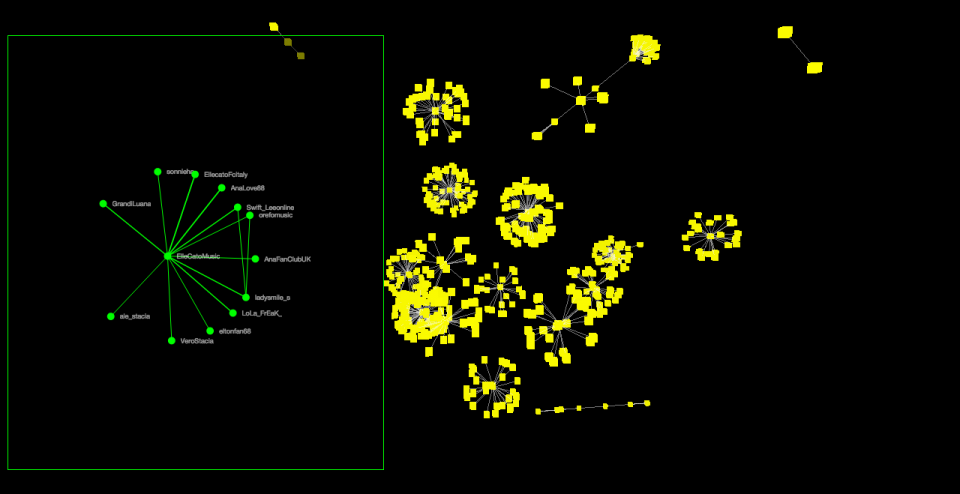 While the projected visualisation of the relations in the human ecosystem of the city displayed the most recent relationships, as they formed, this one visualises the most persistent relationships. In this way it is possible to represent the communities (or tribes, as defined in Netnographical theories), the consistent relations which form around themes and topics, the ways in which they evolve through time, and the roles which people assume in these relations, whether they are experts, influencers, amplifiers of messages, hubs or bridges among different communities.

The third visualisation dealt with the use of language. 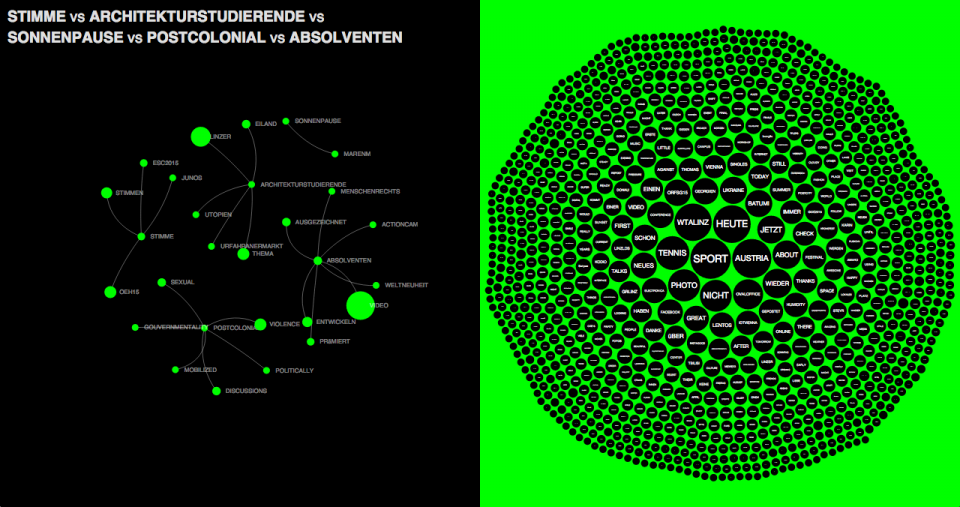 In this visualisation, the most (and least) common topics are described in terms of the ways in which people use language in discussing them. Which words are used for which topics, and their relations can generate multiple insights, also by observing how the use of languages to refer to certain topics evolves through time. In the visualisation, selected topics are explored in terms of the words used to discuss them, and in the relations among different topics.

The last visualisation expanded this type or observation, and explored the relation among different topics. 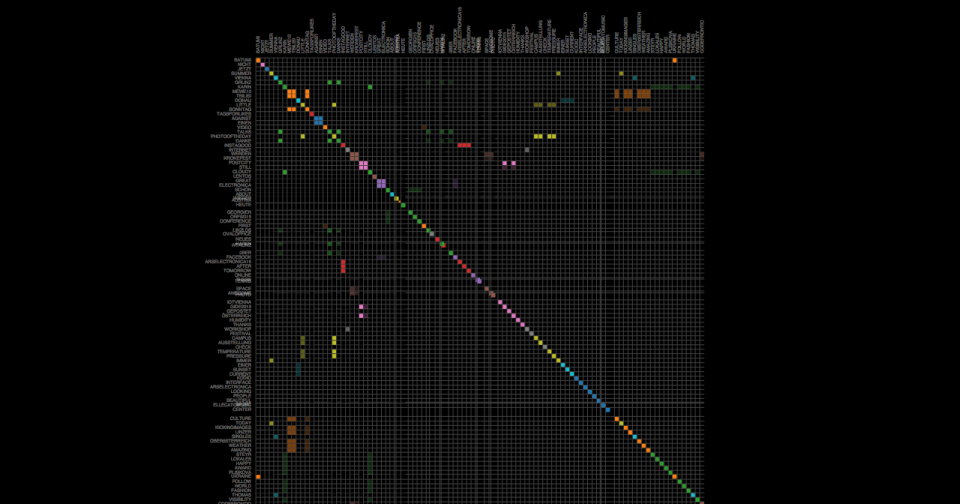 In this visualisation (taken from here), the topics are listed on both axis of the matrix (rows and column headers) and if there is a color at the intersections it means that the corresponding topics are discussed together: the brighter the color, the more often this happens. The elements are constantly shifted together to highlight different characteristics: topic clusters (group of topics which are often discussed together); recurrence (showing the frequency with which topics are discussed) and others. These characters are also color-coded, to reflect the most probable groups to which the various topics belong.

At Ars Electronica, the Myriads project included 15 workshop pills: 15 different micro workshops, each one dealing with one specific point of view or perspective which was relevant to the concept of the work. 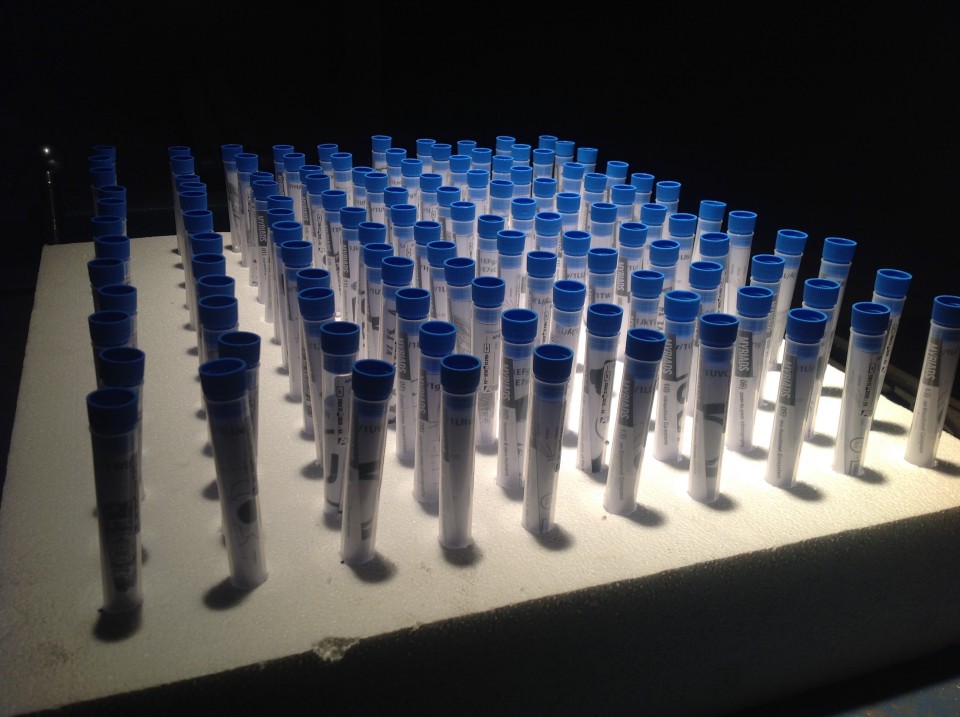 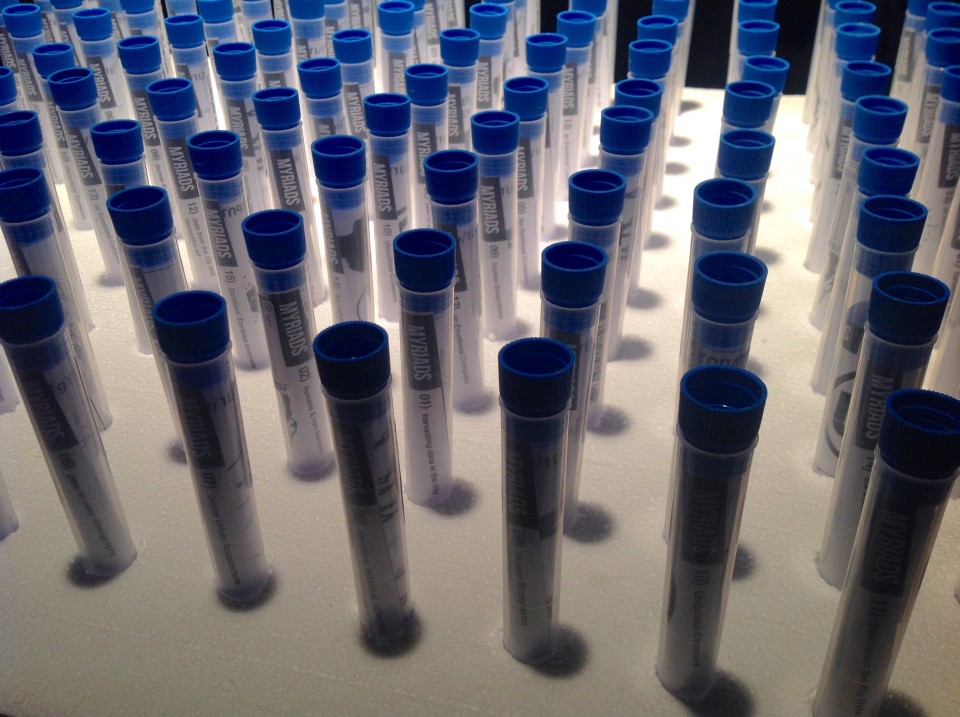 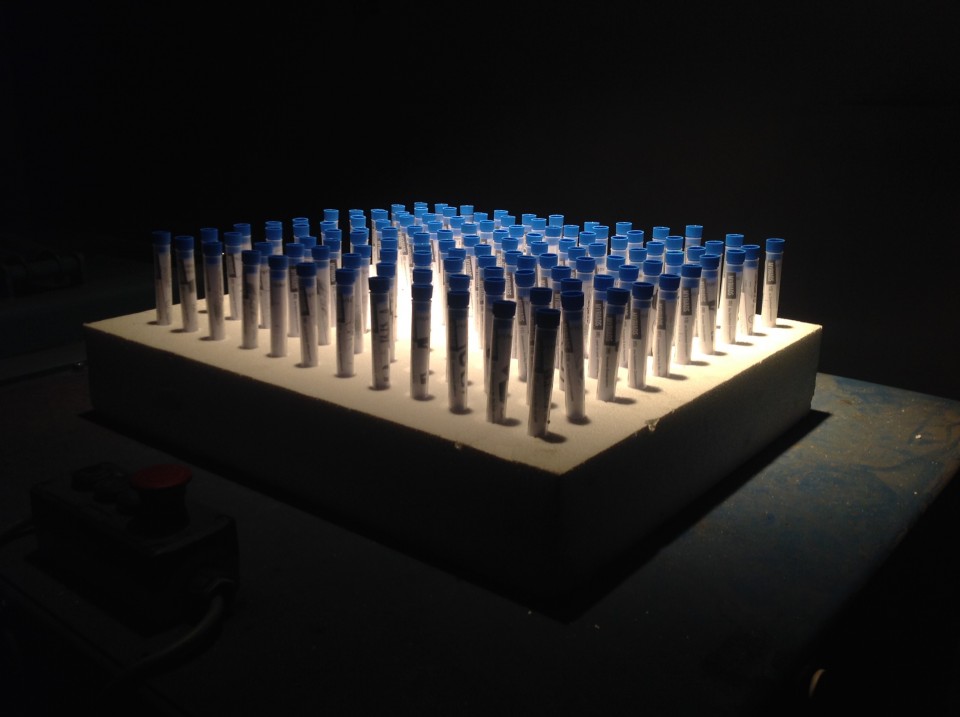 Each workshop pill was distributed under the form of a dose of the Myriads’ knowledge drug, each containing one micro-slide with the title of the workshop and a link to a set of documentation items which were used in it: from articles, to scientific publications, to software and tools.

The workshops covered multiple topics: identity; relational ecosystems; practical examples of generative arts (and the software needed to create it); privacy and surveillance; peer-to-peer ethnography; zombies (and the significance of understanding each era’s monsters). There was also a hidden, mysterious 16th workshop (which some people actually managed to find) going under the title of Jennifer Gabry’s essay “Telepathically Urban“.

Each workshop lasted 20 minutes, giving participants a good overview of the theme, as well as the possibility to choose which workshops to participate to, assembling the, into an educational and experiential path.

These are the slides from the workshop:

We were very satisfied with the results.

As is always our intention, both the exhibit and the education program were a stimulus for people’s perception for possible futures of cities, helping them to build their own imagination, vision and desires beyond mere technologically possible futures, tending toward better understanding of their desirable, imaginable futures, together with other people, their conflicts, agreements, divergences, differences and harmonies.

In this, the education program constituted a major advantage. Workshop participants really seemed to appreciate the effort dedicated to exploring possibilities, going beyond the techno-imaginaries which are currently promoted by industry operators.

People were very engaged, stayed long after the intended 20 minutes duration of the workshops, bringing up interesting and profound conversations. They came back over and over, multiple times, even given the richness of the program at Ars Electronica. This happened for the specific need, expressed by many participants, to confront with the absence of conflict, differences and transgression in the technological discourse about the future of the city.

For example, this was particularly visible and highlighted by the industrialization of mind workshop, and by the identity workshop, where we analysed some of the most critical aspects of the emergence of the experience economies and of the creative economies, as well as in the Ubiquitous Commons workshop, where we learned some models to use to enact participatory actions to propose autonomous alternatives.

In the end, the clear issue was about te importance of the themes which we confronted with in Myriads. They go well beyond the technological features of the “future” cities, and regard human beings’ fundamental rights and desires.