CoS, Consciousness of Streams

CoS Consciousness of Streams

In just a few days we will be at transmediale in Berlin, to create CoS: Consciousness of Streams!

CoS will be something that we’re calling a cognitive virus on the festival, as it will be a cross-medial, emergent, performative, multi-author publication created by processing the festival itself: what goes on, how people move and feel, what people do at workshops, their ideas, connections and expressions.

The definition of CoS went through various stages and we defined it the way you will see it at transmediale by transforming  the initial proposal to harmonize it with the rest of the event, to what will be going on in the other spaces and, last but not least, with budget constraints :)

For download (PDF): CoS Consciousness of Streams Proposal, first version

The second version of the proposal describes what you will actually find at transmediale:

For download (PDF): CoS Consciousness of Streams Proposal, second version

For download (PDF): CoS Consciousness of Streams Proposal, notes to the slides of the second version

“Far from the image of Rodin’s Thinker, the contemporary world definitely abandons the idea of an isolated human, forming thought, ideas, concepts and shapes by isolation, contemplation. “Cogito, ergo sum”, yes, but thinking becomes a very different practice in respect to what had been envisioned by Descartes, transforming the ideas of contemplation, attention, conception, cognition : influencing and open-sourcing them to a series of additional channels and challenges which are enabled by the extension of our bodies and sensory systems through digital technologies.
Multiple sources, different timescales, contemporaneous, asynchronous, overlapping sources, interleaved attention spans that leave linearity behind in favor of networkedness; unconscious becomes predominant; an informant sound forms from the mutual suggestions that all information samples provide along a polyphonic multidirectional timeline in which interference, difference and noise are possibly the most important things to take into account.
Harmony/linearity leaves the stage, enters noise/nonlinearity, deconstruction, emergency and ubiquitousness. Multiple realities overlap, possibly denying each other and forming a neo-reality, that is browsable, filterable, mixable, mash-up-able, sharable, confrontable, storable, morphable, synthesizable, aggregatable.
Cognitive spaces form around fake, unverifiable, temporary bits of information whizzing by, at incredible speeds, clustering and disassembling along complex emergent patterns: multiple, anonymous, collective.
Connect the dots: each emerging shape is different and unrelated, yet it is the explicit expression of the same voices involved.
Time disappears replaced by immaterial places for our traversal: immediatcy; near-past; short time-spans; multiple time scanning; global timezones; recurring times; loops; feedbacks.”

CoS observes the novel condition of networked humanity, definitively suspended in a condition of continuous-present and delegating the ideas and perceptions of past and future to external mechanisms and devices. 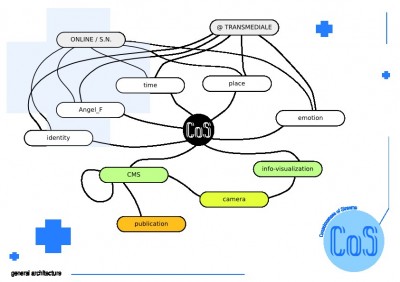 CoS Consciousness of Streams - general architecture

The main idea of CoS is to create an additional, interpretative, layer of reality, to stratify it on top of the festival and to provide collaborative access to it to everyone (present, remote, connected… ), thus multiplying the voices and expressions defining the many versions of reality which we all experience.

“The immersion in the global stream of consciousness forming the current cognitive scape can be seen as an emersion. Dive right through media and emerge from the other side, in a reality that completely changes.
COS, Consciousness of Streams, is a complex yet natural initiative imagining the explosion of our human condition into an observable form.
COS is an environment, a series of networked workshops, a performative practice, an observation/representation methodology, and a second order cybernetic system resulting in an open-ended, on-going, multi-author, emergent, ubiquitous publication.
COS aims at disarticulating the practices of human beings and reassembling them from vantage points for expression and investigation: Identity, Time, Emotion, Place.
Each vantage point is a multidirectional observer: COS uses interfaces and interactions to observe individuals who, in turn, observe COS to form their physical and emotional state.
COS produces and analyzes streams: as a series of matrioskas, the environment is embedded into its container, and into the physical, digital and hybrid realities. The vantage points can be used to explore any level of this containment/intersectional hierarchy and, in turn, are affected by the whole system and by its
individual components.
COS, Consciousness of Streams, hosts the streams of consciousness of the people traversing it or attending its workshops as well as the ones of the global population of the social networks: in, out, in-between, in time, space, relations, difference.
COS is formed by poles focused on the vantage points and implementing interactions that guide individuals through a unique experience through a disassembled reality.
COS gathers all these experiences, and the ones of the people online and transforms them into information, expressing them through practice (the workshops), representation (the cross-medial environment) and performance (the collaborative/performative parts of the workshops).
COS expresses and then observes itself: the technological system embedded in various ways along the whole of COS aim at creating an ongoing experience.
A CMS (Content Management System) uses COS to produce an innovative form of publication, whose process does not end with the event: an open-ended, ubiquitous, multi-author, emergent, augmented reality, cross-medial publication that can be printed, interacted with, used through a location based system and by an augmented reality system: layered over the world and its stratified reality, in a continuous stream.”

CoS is a performative artwork that assumes the form of an interactive framework. The performance will be on-going, meaning that it will still be accessible after the festival, transforming it into a real, open, usable environment.

CoS, Consciousness of Streams
View more presentations from salvatore iaconesi.

The technology used and created for CoS will also be accessible, under the forms of OpenSource APIs (Application Programming Interfaces) available to create additional functionalities for CoS, and as the framework itself, released under a GPL3 license right after the festival.

Everything happening at CoS will be part of the project/performance: the workshops, interactions, connections, expressions. Everything that people, present or remote, will decide to share will be included in the publication/environment, thus opening up the space and making it accessible, usable and reinventable.

Hope to see you all at transmediale for CoS, Consciousness of Streams.

Learn more about CoS, Consciousness of Streams at these links:

CoS Consciousness of Streams at Transmediale, including Workshops and installation information

we are participating to a number of conferences at transmediale: program found here